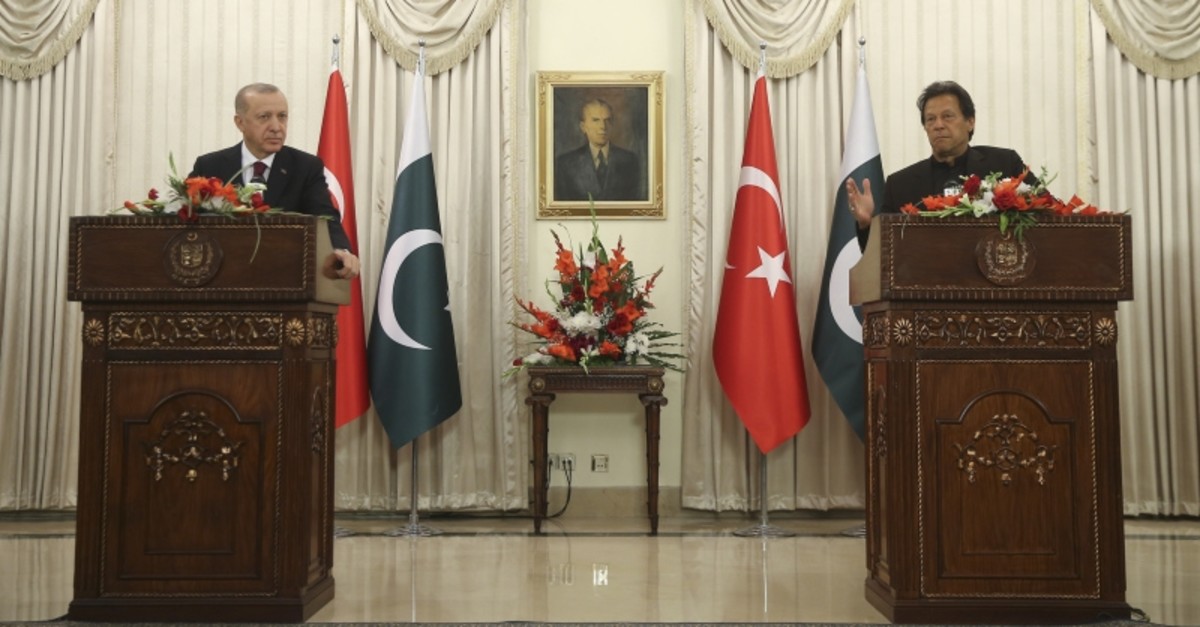 Turkey is in favor of resolving the Kashmir issue by taking into consideration the expectations of the Kashmiri people, and through dialogue based on U.N. resolutions, President Recep Tayyip Erdoğan said Friday.

The issue of Kashmir is as important to Turkey as it is to Pakistan, Erdoğan said. "We have never forgotten and will never forget the help which the Pakistani people extended by sharing their own bread during our War of Independence. And now, Kashmir is and will be the same for us.

"It was Çanakkale [Gallipoli] yesterday and it is Kashmir today, [there is] no difference," Erdoğan told a joint session of Pakistan's parliament during his official visit to the country, referring to a pivotal battle in the World War I.

Erdoğan also told how Turkey raised the Kashmir issue at the UN General Assembly last September, in the wake of a lockdown in Indian-administered Jammu and Kashmir.

"This approach, which aggravates the current situation and revokes the freedom and vested rights of the Kashmiri people, benefits no one," he said.

"The Kashmir problem can be solved not by conflict or oppression, but on the basis of justice and equity."

"8 million Kashmiris live in an open-air prison, I thank Erdoğan for speaking about Kashmir," Khan said at a joint news conference.

Jammu and Kashmir is held by India and Pakistan in parts and claimed by both in full. A small sliver of Kashmir is also held by China.

"The goal of the steps we've taken in Idlib in recent days is to prevent four million oppressed people from dying under the barrel bombs of the [Assad] regime. Turkey's top priority is to stop the bloodshed, demolition, oppression, and tears in all conflict zones from Libya to Yemen," Erdoğan said.

Pakistan stands with Turkey's righteous cause, he said-referring to Turkey's anti-terrorist Operation Peace Spring, launched last October, in northern Syria - despite others who work to protect terrorists.

During its 2016-2019 presidency of the Organization of Islamic Cooperation, Turkey actively engaged in all matters concerning the Islamic community, he said.

Deal of Century 'an occupation plan'

On the so-called Deal of the Century on Jerusalem, announced on Jan. 28 by U.S. President Donald Trump and Israeli Prime Minister Benjamin Netanyahu at the White House to widespread condemnation, Erdoğan blasted the plan as "an occupation project."

"By saying that Jerusalem is our red line, we declared to the whole world that we will never leave the first qibla Jerusalem to the mercy of the invading Israeli state," he said.

In the plan, Trump proposed a patchwork Palestinian state, severely hemmed by illegal Israeli settlements, as well as recognition of Israeli sovereignty over the West Bank and Jerusalem as Israel's "undivided capital."

"Pakistan continues to make progress on the path of development and prosperity. Undoubtedly, economic development cannot be achieved within a single day. It is necessary to work hard for this to act in a planned way with perseverance, faith and confidence. Stability and trust are two indispensable conditions for development," Erdogan said.

He said Pakistan's efforts in cooperation with legislative, executive, judicial and military institutions as well as its steps to improve business and the investment environment "will make Pakistan a more attractive country in the eyes of investors."

"We appreciate Pakistan's efforts to combat terrorism," he added.

"Pakistan is a country that has suffered from instability, terrorism and conflicts in its region. As a country that has been fighting separatist terrorist organizations including Daesh [ISIS], the PKK and (Gülenist Terror Group) FETÖ for 35 years, we understand the challenges Pakistan faces and we will continue to support Pakistan in its efforts against terrorism."

The YPG/PKK has taken some 40,000 lives in its 30-year terror campaign on Turkey, and FETO infiltrated national institutions to launch a defeated coup attempt against Turkey in 2016.

Turkey stands with Pakistan in FATF

FATF, an international watchdog against money laundering and the financing of terrorism, has put Pakistan on its grey list for jurisdictions with strategic deficiencies.

Turkey, Malaysia, and China are the three main countries pushing to remove Pakistan from the grey list.