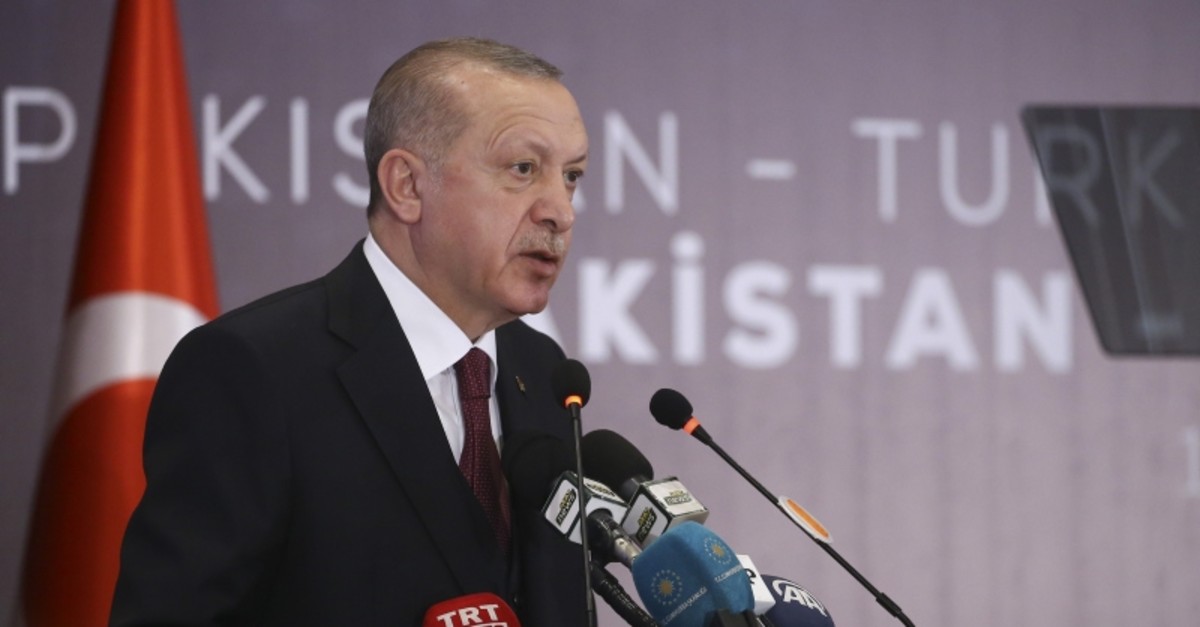 Speaking to reporters on his return flight from an official visit to Pakistan, Erdoğan said recent clashes in Idlib have inflicted heavy losses on regime forces, causing concern for both the Assad regime and Moscow.

The Turkish president stated that Ankara's main concern is that the regime's offensive in Idlib is pushing nearly 1 million people toward the Turkish border.

"We already host 3.5-4 million people (Syrian refugees). Unfortunately, we do not have the capacity to accept another million. So what do we do? We said let's build briquette shelters along the border inside (Syria). There are intensive construction works at the time," Erdoğan said.

Ankara has requested financial help from Germany and other European states to build these shelters, he said, adding that the Turkish Red Crescent is expected to receive 25 million euros from the Europeans through the Red Cross.

Later on Saturday, Erdoğan made additional remarks about the situation in Idlib and said the crisis will not be resolved until Syrian regime forces withdraw outside the borders that Turkey and Russia outlined in a 2018 agreement in Sochi.

"The solution in Idlib is the (Syrian) regime withdrawing to the borders in the agreements. Otherwise, we will handle this before the end of February," Erdoğan said.

"Until we clear Syria of terrorist organizations and the cruelty of the (Syrian) regime, we will not rest easy," he said.

The posts were set up after a 2018 Russia-Turkey deal agreed in Sochi to prevent a regime offensive, but in recent months, Assad has pressed an assault supported by Russian airstrikes.

He added that senior Russian officials are currently managing the war in Libya with putschist Gen. Khalifa Haftar and using additional soldiers brought from Sudan and Chad.

"We are in favor of establishing peace but we want this to be known – Turkey will continue protecting both Turkey and Libya's legal rights in the Mediterranean until the very end," he said.

Eastern-based forces loyal to Haftar continue their attacks targeting residential places and civilians to capture the capital Tripoli from the U.N.-recognized legitimate government, despite calls for a cease-fire at the Berlin conference.

The president also commented on the controversial "Deal of the Century," unveiled by U.S. President Donald Trump in January and said the plan threatens regional peace and tranquility.

Erdoğan stressed that Turkey will never allow "legitimization of invasion, annexation and destruction."

Noting that neither the West nor Europe or Africa accepted the so-called peace plan, he said Turkey will get a favorable result when it brings the issue to the United Nations for further discussions.

He also urged Muslim countries and the Organization of Islamic Cooperation (OIC) to take clear stance against the plan.

On Jan. 28, Trump revealed the plan and proposed an independent Palestinian state but with the recognition of Israeli sovereignty over the West Bank and Jerusalem as Israel's "undivided capital."