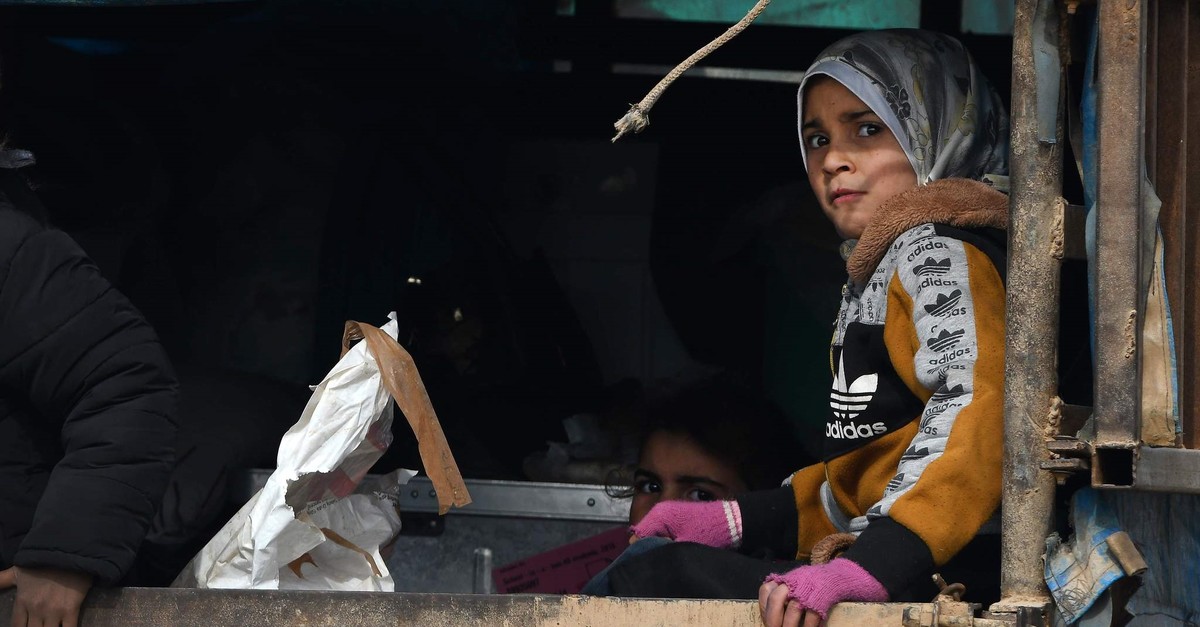 A displaced Syrian child rides in the back of a truck passing by Dayr Ballut on the way to Afrin and Azaz near the Turkish border in the opposition-held part of Syria's Aleppo province, Feb. 14, 2020. (AFP)
by Daily Sabah Feb 16, 2020 11:59 pm

Despite the perpetrators of the civilian suffering in Idlib are known to everyone without a glimpse of a doubt, Western media insists on grasping a rhetoric that overlooks both Syrian regime and Russia, failing to portray a well-rounded perspective of the catastrophe

Syria has been the scene of the biggest refugee crisis the world has ever seen since World War II as millions of people were displaced both within and outside the country while millions of others were killed during the clashes. The last two months witnessed the peak of the crisis as the northwestern province of Idlib, the last opposition stronghold, witnessed civilians stuck under constant attacks of both the Syrian regime and its backers, leading to a humanitarian catastrophe with major influence over the regional demography and politics. However, despite the scale of the crisis, Western media, which is known by many pundits for its "sensitivity" to humanitarian causes, falls flat in covering the recent developments while failing to portray a strong, unified stance against the attacks.

Although there are regular reports from Western news agencies, describing the situation in the field and informing the international community of the related political developments, the Western media coverage seems to not go beyond these basic flows of information. They let the civilians suffering from the attacks down by not paying enough attention to the case.

When checked regularly, it can be seen that various major Western media outlets, such as The New York Times, The Guardian, Financial Times and The Independent, have been sharing content related to Idlib quite often. However, most of their content is a mere copy-paste of the agencies' reports, lacking any perspective of the media outlet itself on the issue. Although there are few news stories that aim to get deeper with the case by portraying broad background research and/or various civilian interviews, many of these stories fail to portray the reason behind the crisis. They ignore the part of the Syrian regime and Russia in the catastrophe as a whole and approach them both as if they are nothing but some other regional actors, which somehow ended up in Idlib. Even the language that is used in most of the articles proves this indifferent approach toward the perpetrators of the crisis, as many news outlets still refer to the Syrian regime as the "Syrian government," overlooking the illegitimate stance of Bashar Assad in the eyes of the international community.

Idlib has been a stronghold of the opposition and anti-government armed groups since the outbreak of the Syrian civil war in 2011. In September 2018, Turkey and Russia agreed to turn Idlib into a de-escalation zone in which acts of aggression are expressly prohibited. But more than 1,800 civilians have been killed in attacks by the regime and Russian forces since then, flouting a 2018 cease-fire and a new one that began on Jan. 12. More than a million Syrians have moved near the Turkish border due to intense attacks in the past year.

Another major point that makes the Western media coverage of Idlib "not good enough" is the fact that it has not been so long since all the media outlets in the West have united over a so-called "humanitarian cause" and portrayed an insistent, strong stance on it, proving their capability to do so when they actually desire it. The incident that is being referred to is nothing but Turkey's Operation Peace Spring that was launched on Oct. 9 to eliminate terrorists from northern Syria east of the Euphrates River in order to secure Turkey's borders, aid in the safe return of Syrian refugees and ensure Syria's territorial integrity. The operation, conducted in line with the country's right to self-defense borne out of international law and U.N. Security Council resolutions, aims to establish a terror-free safe zone for Syrians' return in the area east of the Euphrates River controlled by the U.S.-backed SDF, which is dominated by YPG terrorists.

Being the third cross-border operation of the country in Syria, the move received massive reactions from the West with news full of manipulation and deception floating everywhere. Although the operation was against the terrorist elements in the region, mainly the PKK and the YPG, the Western media portrayed it as if it was against the Kurds with no reason and was causing a massive humanitarian crisis in the region, despite the fact that it was launched in accordance with international law. The anti-Turkey sentiments reached a point that Turkish people in Western countries started to be attacked by PKK supporters while Western communities kept their silence. The attacks not only targeted Turkish civilians but also foreign missions, businesses, Turkish associations and mosques, with the sympathizers of the terror group even setting fire to these places in some instances. Apart from attacking the Turkish community, PKK supporters also held rallies in support of the terrorist group in several European capitals, including Berlin, London, Amsterdam, Cologne and other cities.

Western politicians were also responsible for such incidents as they were the fueling power behind the media. After Turkey launched the operation, some EU members demanded the U.N. Security Council to release a joint statement against the operation, following the bloc's message of condemnation. However, this demand was rejected by both the U.S. and Russia at the Security Council. Although their initial attempt was rejected in the council, some EU members also released a joint statement against Turkey. In their statements about the operation, Western politicians expressed their "concerns" by saying that civilians in the region were "under threat." Supporters of the PKK terror group and the YPG also conducted a defamation campaign against Turkey by sharing fake news and footage on social media. In these posts, videos or photos taken in different places and times were presented as if it was from Operation Peace Spring to manipulate the public's perceptions.

However, the West was actually shooting itself in the foot by acting in such a way since Turkey's operation was aiming to provide a safe space for refugee return, a problem that especially European countries have been struggling with for years. Not learning its lesson from previous experience, the West insists on its blindness over the consequences of the regime's and Russia's actions in the region, as well as the fact that if Turkey did not confront these moves, a new refugee flow would likely head to Europe in the near future.

Turkey has been reinforcing its observation posts in Idlib following two attacks by Assad regime forces, which left 13 Turkish soldiers and a civilian dead, and 45 others injured. The military previously sent a convoy of at least 330 military vehicles, the largest of its kind sent to the region in recent times.