Turkish minority slams Greek president over denial of their identity 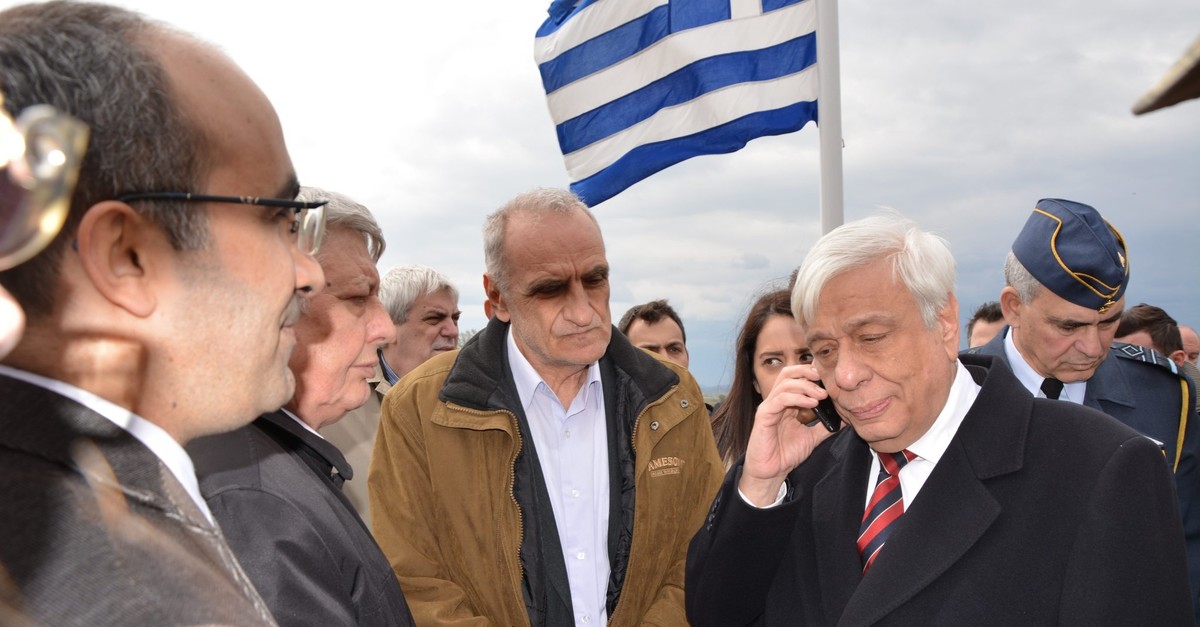 Greek President Prokopis Pavlopoulos speaks with Turkish President Recep Tayyip Erdou011fan on the phone during a visit to Greek soldiers on the Greece-Turkey border in this undated photo. (AA File Photo)
by Daily Sabah Feb 18, 2020 1:27 pm

Turkish minority communities in Greece have criticized a recent statement by Greek President Prokopis Pavlopoulos that referred to them as a "Greek Muslim minority," saying that the statement denies their ethnic identity.

The Federation of European Western Thracian Turks said in a statement that the Greek government continues to maintain its policy of denial regarding the national identity of the Turkish minority.

"Our country, Greece, should immediately stop considering the Western Thracian Turkish community a threat and danger and make direct contact with us," the federation said in a statement, according to a report by Anadolu Agency (AA). The statement continued by noting that although borders have changed throughout history, the Turkish people continue to remain in Western Thrace and preserve their Turkish identity.

The Western Thrace Minority University Graduates Association noted that the Greek president's statements indicate that the country has not reached democratic maturity yet.

"The minority in Western Thrace has always had the desire to be recognized as Turkish, both through its institutions and with its members," the statement read, adding that they hope this mindset ends soon.

The Iskeçe (Xanthi) Turkish Association also criticized the president's remarks for denying the ethnic identity of the Turkish minority, while they highlighted determination to ensure the protection of the minority's will.

Pavlopoulos, whose term is expected to end on March 14, recently visited Western Thrace, claiming that the Turkish minority there is a religious minority rather than an ethnic one.

The rights of the Turks of Western Thrace were guaranteed under the 1923 Treaty of Lausanne, a pact forged in the aftermath of World War I, but since then, the situation has steadily deteriorated. After a Greek junta came to power in 1967, the Turks of Western Thrace started to face harsher persecution and rights abuses by the Greek state. Following Turkey's 1974 peace operation in Cyprus to save Turkish Cypriots there, the Greek military junta eventually fell, but the tight restrictions on the Turkish minority persisted and tightened. By the early 1990s, some rights of the Turkish minority were restored but only partially. However, problems regarding collective and civil rights continued, and additional suffering emerged.

Greece bases this policy on its misinterpretation of the Treaty of Lausanne, as the treaty in no way excludes consideration of the minority's Turkish identity. Indeed, in the 1950s, during an era of good Turkish-Greek relations, Greece used to officially refer to the minority as the "Turkish minority."

But this stance started to change after the 1967 military junta began referring to the minority as a "Muslim minority," a policy that continues today.

Throughout the 1980s, Greece even banned associations that had the word "Turkish" in their names. The European Court of Human Rights ruled against Greece on this matter in 2008, but Greece has defied the rulings, refusing to implement them. Under this draconian policy, all Turkish minority associations that contain the word "Turkish" in their names are still forbidden in Greece.