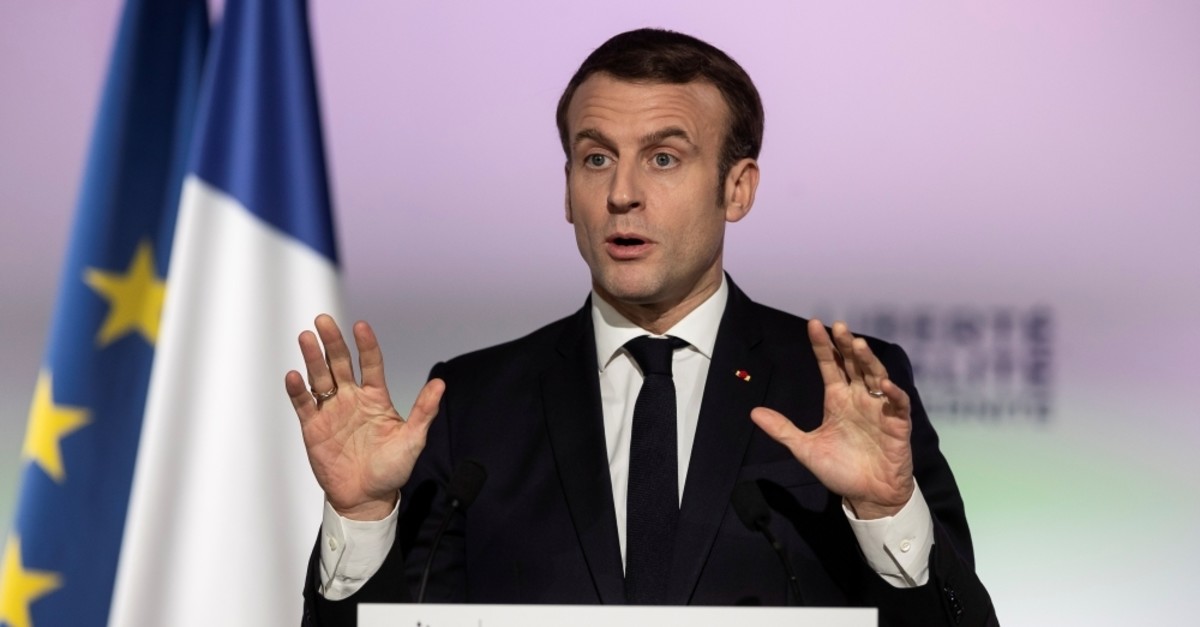 France will end foreign language classes, including Turkish lessons, if the country fails to reach an agreement with Turkey and other countries as it aims to combat "foreign interference," President Emanuel Macron announced Tuesday.

Macron told reporters in the eastern city of Mulhouse that the government will end foreign language and cultural classes throughout the country as of September 2020.

He claimed that some groups want to separate themselves from the laicist republic and choose not to respect the laws in the name of religion.

He will be ending a program signed in 1977 that allowed nine countries, including Turkey, Tunisia, Morocco and Algeria, to send teachers to France for language and cultural classes without interference by French authorities. The program reaches about 80,000 students per year.

The French president said the government aims to combat foreign interference in schools and mosques in the country, as he claimed it does not target Islam and that the problem is "not Muslim French people."

He also noted that authorities have put 47 neighborhoods under tight scrutiny under the scope of fighting radicalism.

Expressing concern about not being able to control the curriculum in these classes, Macron said it is a serious problem.

He said France has been negotiating with Turkey, Tunisia and Morocco for months regarding the matter.

"Teachers providing these lessons will be subject to supervision. These teachers must speak French, obey the law and the curriculum needs to be under control," he said.

Some 15 mosques, 12 associations and four schools have been closed in the past two months, as Macron said the government is planning to introduce new laws to ensure transparency of funds for these institutions.

The country will also scrap a program involving 300 imams from Turkey, Algeria and Morocco, as Macron argued the imams need to be educated in France and know the language.

"I consider the Turkish people living in France to be French. I want them to be French and have the same rights as the French but they are subject to the same laws. Turkey's laws do not apply here," he said.

Recently, German Chancellor Angela Merkel's government also banned imported imams, requiring them to be educated in the country. Many of the country's imams were educated in Turkey or Middle Eastern countries.

France has the largest Muslim minority in Europe, estimated at 5 million or more out of a population of 67 million. Anti-Muslim hatred has significantly risen in Europe in general in recent years. Far-right extremism and xenophobia have fueled anti-Muslim hatred in Western countries, where terror attacks by Daesh and al-Qaida as well as a migrant crisis are used as an excuse to legitimize those views.

There have been intermittent attacks on mosques in France since 2007, when 148 Muslim headstones in a national military cemetery near Arras were smeared with anti-Islamic slurs and a pig's head was placed among them. In June 2019, a gunman wounded an imam in a shooting at a mosque in the northwestern city of Brest, but police ruled out a terror motive. In March, workers building a mosque in the small southwestern town of Bergerac found a pig's head and animal blood at the entrance to the site, two weeks after a gunman killed 51 people in Christchurch, New Zealand, in a shooting spree at two mosques.

France was the first country in Europe to ban Islamic face veils, such as the burqa and the niqab, in public places in 2010. In 2014, the European Court of Human Rights upheld the ban but said the law could appear excessive and encourage stereotyping. France was also embroiled in a row over bans on the burkini, a full-body Islamic swimsuit, in resorts around the Riviera. Since then, French Muslims have growing concerns, saying that decisions taken by some municipal authorities to ban the burkini could lead to the further stigmatization of Muslims.