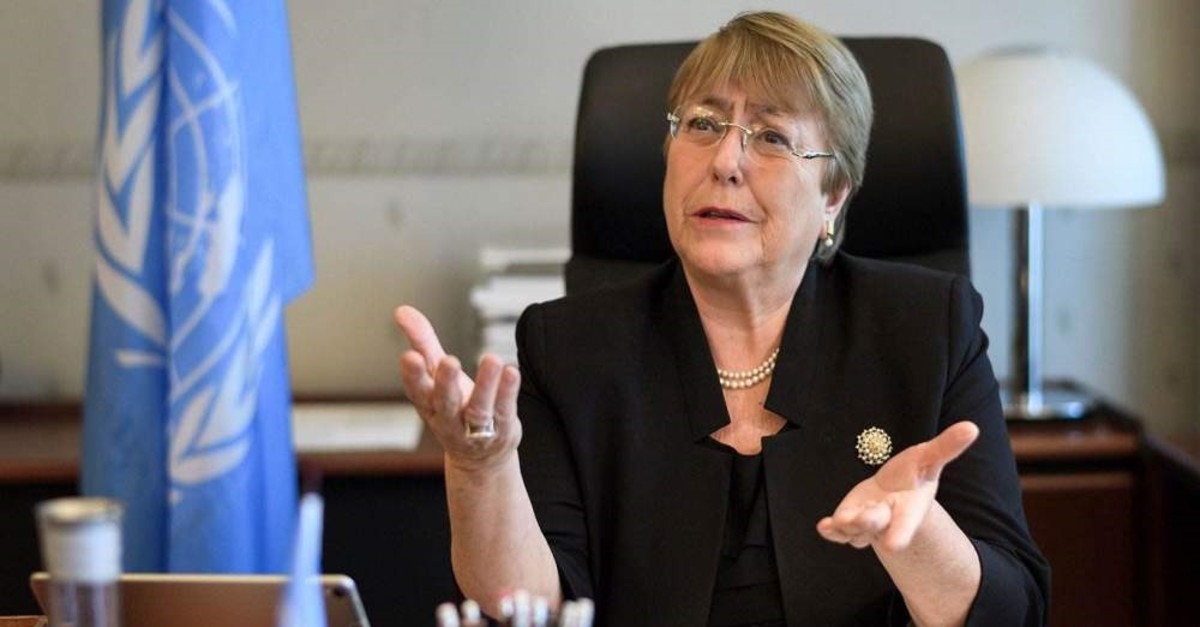 The U.N. human rights chief urged Syrian regime forces and their allies Tuesday to allow safe corridors in conflict areas in northwestern Syria, where a military offensive has unleashed a massive wave of fleeing civilians in one of the worst humanitarian catastrophes in the long civil war.

Michelle Bachelet told reporters in Geneva it was "cruel beyond belief" that civilians live under plastic sheeting in freezing conditions while getting bombed.

Her appeal came a day after the Bashar Assad regime pledged to press ahead with a military campaign in the northwest which has displaced more than 900,000 people from their homes since the start of December, according to U.N. officials. Many of the civilians are sleeping in open fields and under trees in freezing temperatures.

Expressing "horror" at the scale of the humanitarian crisis in northwestern Syria, the U.N. High Commissioner for Human Rights Bachelet called for humanitarian corridors to be set up for fleeing civilians.

"Entire families, some who have fled from one corner of Syria to the other over the past decade, are tragically finding that bombs are part of their everyday life," said Bachelet.

The U.N. rights office said it could see no justification for carrying out such "indiscriminate and inhumane attacks on an already hugely traumatized population."

Bachelet said: "Civilians fleeing the fighting are being squeezed into areas without safe shelters that are shrinking in size by the hour. And still, they are bombed. They simply have nowhere to go."

She noted that there was a high risk that civilians would no longer be able to cross from Idlib to any other areas in Syria.

With 148,000 people displaced in Idlib city in the past six days, the number of displaced people in Idlib and neighboring areas since January 2019 has reached nearly 2 million.

Most of them are taking shelter in areas close to bordering Turkey, which already hosts over 3.6 million Syrian refugees.

The high commissioner urgently called on all parties to the Syrian conflict, "including state and non-state actors," to immediately cease hostilities and ensure the protection of all civilians.

The Syrian regime, backed by its allies, has continued its military offensive this month to control critical areas in Idlib and Aleppo.

The U.N. Human Rights Office recorded incidents in which at least 100 civilians, including 18 women and 35 children, were killed and many other civilians injured.

The deaths were the result of the airstrikes and ground-based strikes by regime forces and their allies from Feb. 1 to Feb. 16.

According to U.N. estimates, more than 900,000 people, of whom about 80% are women and children, have been displaced since December 2019.

In all, since Jan. 1, this year, the U.N. Human Rights Office has recorded the deaths of 298 civilians in Idlib and Aleppo. The Syrian regime and its allies caused around 93% of those deaths, according to the U.N. Also, 10 medical facilities and 19 educational facilities were either directly hit or affected by strikes close by.

In another statement on Tuesday, U.N. Secretary-General Antonio Guterres voiced alarm over the humanitarian situation in northwest Syria.

Guterres is "alarmed by the rapid deterioration of the humanitarian situation in northwest Syria and the tragic suffering of civilians," his spokesman Stephane Dujarric said in a statement.

The U.N. chief called for an immediate cease-fire amid clashes between opposition groups and Syrian regime forces backed by Russia and Iran.

"International humanitarian law must be upheld. There is no military solution," said Dujarric, adding a "credible and inclusive U.N.-facilitated political solution" would be the only path to stability.

Dujarric said the hostilities are approaching densely populated areas, and Syrians are "on the move in freezing temperatures in search of safety, which has become ever more difficult."

Mark Lowcock, the U.N.'s humanitarian affairs chief, said Monday that "indiscriminate" violence in the region had reached "a horrifying new level" since the regime offensive began in December, and he demanded the Security Council to take action to avoid a catastrophe of historic proportions.

"The biggest humanitarian horror story of the 21st century will only be avoided if Security Council members, and those with influence, overcome individual interests and put a collective stake in humanity first. The only option is a cease-fire," he said.

However, more than 1,800 civilians have since been killed in attacks by the regime and Russian forces, flouting the 2018 cease-fire and a new one that started on Jan. 12.

The Syrian regime's advances have sent hundreds of thousands of civilians fleeing toward the border with Turkey.

"He's fighting on Idlib," Trump told reporters before boarding Air Force One. "He doesn't want people to be killed by the thousands, and hundreds of thousands."

Trump said Washington and Ankara are "working together" to determine what can be done.