No winners in Russia's game of roulette 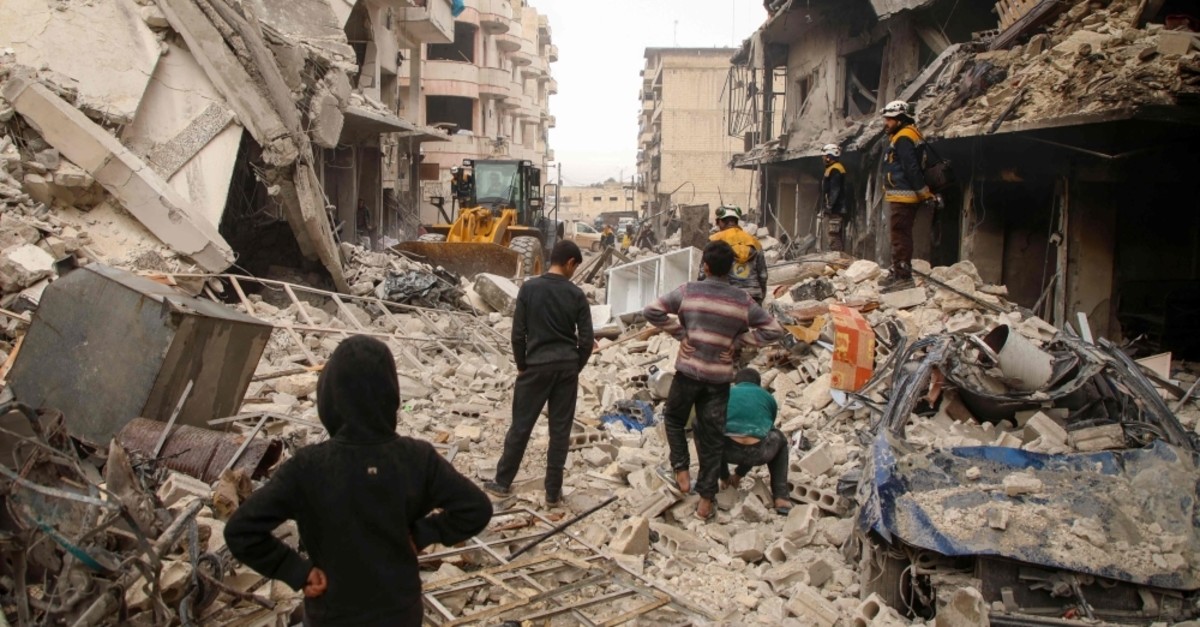 Members of the Syrian Civil Defence, also known as the White Helmets, watch as a bulldozer clears rubble and debris at the site of reported airstrikes on the town of Ariha, Idlib, Jan. 30, 2020. (AFP Photo)
by Nur Özkan Erbay Feb 22, 2020 8:41 pm

We have reached the end of the game of roulette being played by Russia in northwestern Syria’s Idlib. Moscow has not had a great track record in political solutions in Syria so far. Also, it is on the verge of losing all its gains on the ground and at the table regarding its agreements with Turkey. For a better understanding of the situation, a review of Moscow’s fluctuating and renegade attitude throughout the civil war could prove useful.

Despite warnings from Turkey, Russia has shown little interest in finding permanent solutions for the problems in Syria through peaceful and diplomatic avenues. Likewise, Moscow has taken few steps to prevent the aggression of the Bashar Assad regime’s troops toward the Turkish army. On Thursday, two more Turkish soldiers, who were deployed to the area to maintain a cease-fire according to Sochi agreement, were killed by regime forces. Moscow, on the other hand, does not seem eager to pull regime forces back to the line designated in the Sochi deal. On the contrary, it turned a blind eye to the harassment the regime forces have directed at Turkish troops and brazenly accused Turkey of not clearing the area of radicals. This attitude has risked the military, political and humanitarian objectives of the Sochi deal. Though Moscow would not dare directly challenge Ankara, it has wielded the hostile acts of the regime as a coercive power instead. It is clear that Ankara has run out of patience with this deceptive policy.

As a result of these developments, President Recep Tayyip Erdoğan sent a clear message on Wednesday. An operation in Idlib is likely since less than a week remains for the deadline given by Ankara to the regime to withdraw from recently captured areas. In the case of no withdrawal, Turkey is ready to launch an extensive operation against the Assad regime, which has not abided by the Sochi deal. Some 10,000 soldiers, including Syrian National Army (SNA) forces and a huge amount of military equipment, have already been deployed to the area.

Meanwhile, international outrage continues to grow against Russia’s intransigent attitude. It is expected that Moscow, which had gained trust through the diplomatic process with Turkey, will lose diplomatic face if it does not adopt a reconciliatory stance. We witnessed the first signs of backlash in the letter suggesting sanctions against Russia due to attacks in Idlib sent to U.S. State of Secretary Mike Pompeo by U.S. legislators. Also, German Chancellor Angela Merkel and French President Emmanuel Macron spoke on the phone with Russian President Vladimir Putin to push him to implement the cease-fire in the province. The statements by the U.S., EU and NATO condemning the Assad regime’s attacks should also be noted as they show how an anti-Russia alliance could be formed in hours. Erdoğan’s phone call with Merkel and Macron yesterday to discuss the latest situation in Idlib should also be marked under these circumstances. Furthermore, we should also not overlook Defense Minister Hulusi Akar’s statement implying that Ankara could request Patriot missiles from the U.S., though this information has yet to be confirmed; however, current relations suggest both sides would work together should the need arise.

With many indicators pointing to a weakening of Moscow’s hand, it is certain Russia has reached the end of its game of roulette. Moscow may decide to maintain its game, but other actors will no longer tolerate the suffering of Syrian people. Syrian refugees, who fled from the Assad regime’s persecution and found shelter in Turkey, deserve the right to safely return to their homes.

Erdoğan and Putin's phone call was highly critical and determinative in many aspects, in terms of promising for peace in Syria and maintaining the Turkish-Russian alliance for the future of Syria.