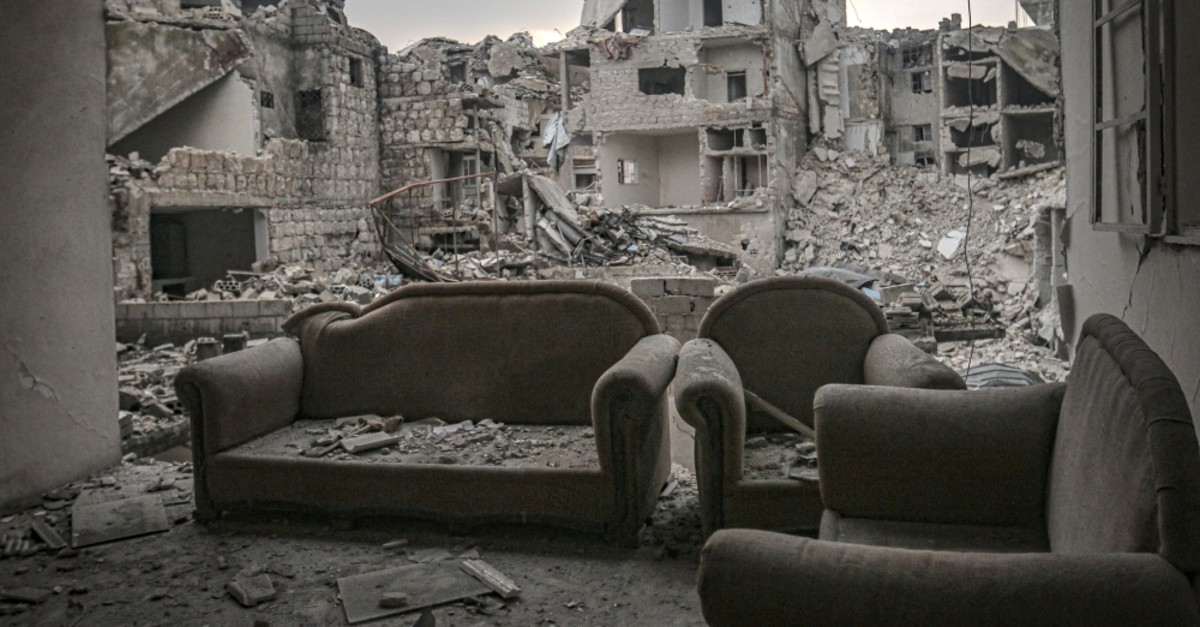 Two U.S. lawmakers voiced concern Thursday over the rising tension in Syria's northwestern Idlib province and urged Secretary of State Mike Pompeo to take diplomatic action against the Syrian regime and Russia, which have been constantly attacking civilians and vital facilities while ignoring the Sochi deal aimed at forming a de-escalation zone in the region. U.S. nongovernment organizations, alarmed by the latest humanitarian catastrophe, also called on the government to take action against the aggression of Russia and the Syrian regime.

In a bipartisan letter to Pompeo, Republican Rep. Michael McCaul of Texas and Democratic Rep. Eliot Engel of New York urged the top diplomat to impose economic sanctions on those responsible for the Idlib offensive.

The latest offensive of the Russian-backed Bashar Assad regime in an attempt to seize control of Idlib has displaced nearly 900,000 people while leaving hundreds dead since December.

"We urge you to enhance diplomatic action to ensure that Russia and Assad cannot further undermine the international response to the humanitarian crisis that they created," said the lawmakers.

Furthermore, a group of U.S.-based nongovernmental organizations on Thursday called on U.S. President Donald Trump to prioritize the situation in Idlib.

In a press conference on Capitol Hill, Nihad Awad, executive director of the Council of American-Islamic Relations (CAIR), said the largest humanitarian catastrophe in the 21st century has been "unfolding before our eyes" for the past few months.

"We are here to call on the Trump administration to make Syria a priority, to apply the necessary pressure on the Syrian regime, Russia and its allies to end the bombing of the Syrian population," said Awad.

He said the press conference aimed to call attention to the plight of Syrians and the lack of action on what is happening in Syria.

Zaher Sahloul, president of the humanitarian charity MedGlobal, said Trump could salvage the credibility of the U.S. and "prove that you have an upper hand by making Syria a priority."

Sahloul said the U.S. president must force his Russian counterpart Vladimir Putin to stop the bombing of Syrian hospitals and children.

"Russia was given a free hand in Syria, and it created chaos," he said.

Zaki Lababidi, president of the Syrian American Council, called for international help for Turkey and its leader President Recep Tayyip Erdogan, who he said was working to protect civilians in Idlib.

"But they need NATO help and (they are) facing Russian aggression and we should provide that (help)," said Lababidi.

U.N. humanitarian affairs Chief Mark Lowcock, on the other hand, said Wednesday: "I am getting daily reports of babies and other young children dying in the cold. Imagine the grief of a parent who escaped a war zone with their child, only to watch that child freeze to death. They are moving into increasingly crowded areas they think will be safer. But in Idlib, nowhere is safe."

"As his barrel bombs fall day and night on the people of Idlib, Assad shamelessly announces the resumption of blood flights from Damascus into Aleppo Atrocity Airport. This is no dream of the Syrian people; they are living through a nightmare of death and destruction," State Department spokeswoman Morgan Ortagus wrote on Twitter Thursday.

A Syrian commercial flight from Damascus with officials and journalists landed at Aleppo International Airport on Wednesday, marking the resumption of domestic flights between Syria's two largest cities for the first time since 2012 – even as nearby, the regime's onslaught continued with airstrikes reportedly hitting several opposition-held towns and villages.

Turkish soldiers and moderate opposition groups in northwestern Syria's Idlib on Thursday launched a military operation against Assad regime's forces, which have been advancing south of the province to capture the last strong opposition bastion.

Opposition groups trying to recapture settlements seized by the regime in southern Idlib province captured the village of Neirab after fierce clashes. The village on the M4 highway is some 10 kilometers southeast of Idlib's city center and 6 kilometers west of the strategic town of Saraqib.

Later in the day, the Turkish Defense Ministry announced that two Turkish soldiers were killed in an airstrike in Idlib, and five others were wounded. The ministry added that "more than 50 regime elements, five tanks, two armored vehicles, two technicals and one howitzer have been annihilated."