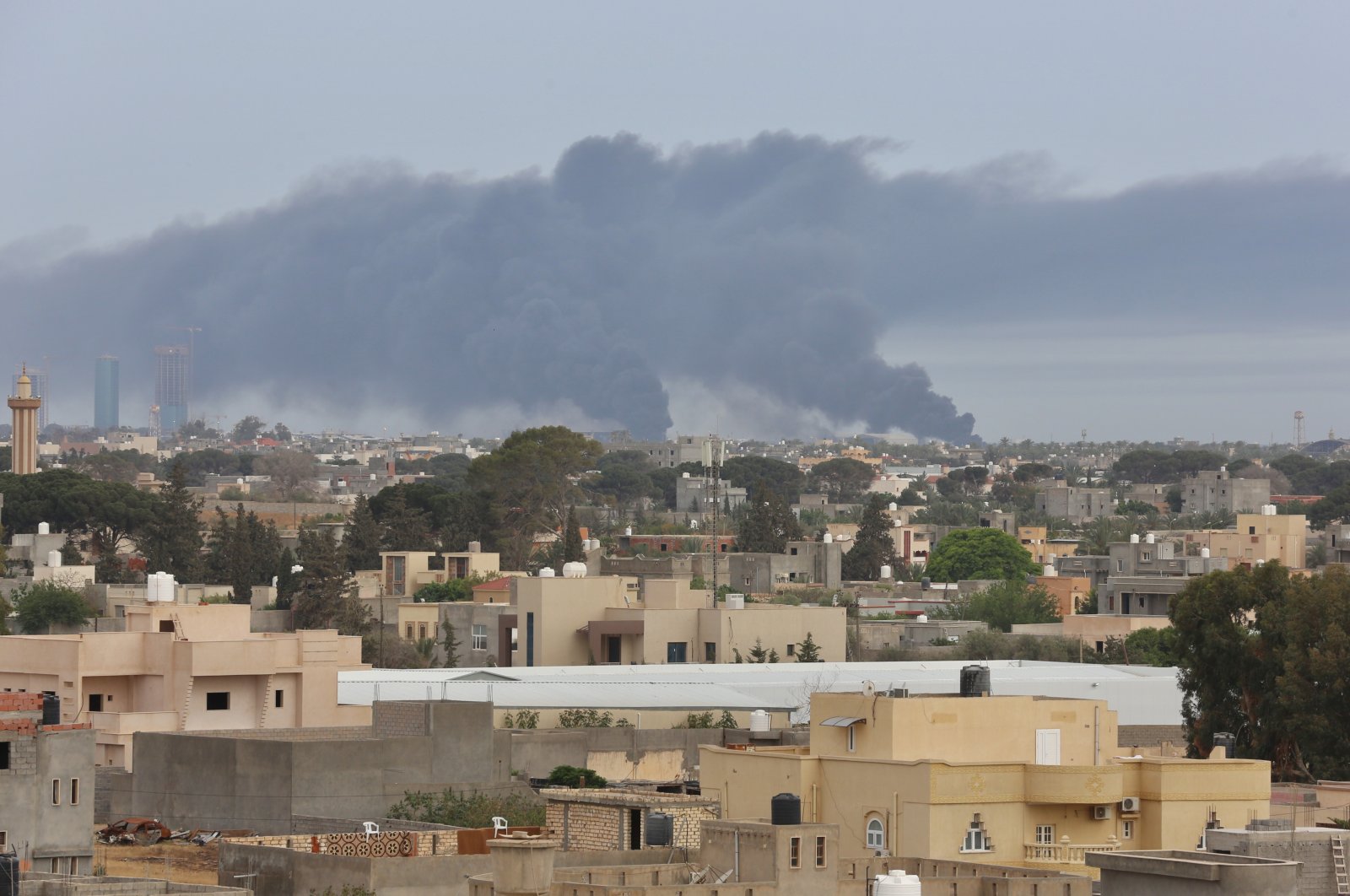 Smoke rises after shelling by Haftar's forces on the Mitiga International Airport in the Libyan capital Tripoli, May 9, 2020 (AA Photo)
by DAILY SABAH WITH AGENCIES May 10, 2020 9:57 am
Edited By Eralp Yarar

Warlord Haftar's forces continue to target the Libyan capital and shelled the Mitiga Airport, while Prime Minister al-Sarraj said the government has no choice but to respond to the aggression

Libya's Government of National Accord said at least four civilians, including a child, were killed when rockets rained down on the capital Tripoli and its only working airport Saturday. Fighting between Libya’s internationally recognized government and the forces of putschist Gen. Khalifa Haftar over Tripoli intensified Saturday with heavy artillery shelling the sole functioning airport in the capital city, setting jet fuel tanks ablaze and damaging passenger planes, government authorities and the U.N. said, while the Libyan prime minister criticized the international community for indifference to Haftar violence.

"The forces of war criminal (Haftar) fired more than a hundred rockets and missiles at residential areas in the centre of the capital Tripoli Saturday", the GNA said in a statement on Facebook.

At least four civilians, including a five-year-old girl, were killed and more than a dozen others wounded in the working-class neighbourhoods of Abu Slim and Ben Gashir south of the city, health ministry spokesman Amin al-Hashemi said.

The Tripoli-based Transportation Ministry said one of the damaged aircraft had been scheduled to leave Tripoli to bring back Libyans stranded in Spain by the coronavirus lockdown. It blamed east-based forces fighting to take the capital for over a year for the attack.

Brega Petroleum Marketing Company said the shelling at Mitiga International Airport in Tripoli set its jet fuel tanks on fire. The company, which is part of Libya’s National Oil Corporation, shared footage of apparent damaged tanks while firefighters try to distinguish the fire.

Authorities had halted civilian flights at Mitiga, which is part of a military base in the capital, in March even before announcing the suspension of air travel as part of its measures to fight the coronavirus pandemic.

The U.N. support mission in Libya blamed Haftar forces for the attack on Mitiga.

“Today’s heavy shelling is one in a series of indiscriminate attacks ... killing more than 15 and injuring 50 civilians since May 1,” it said. The mission said Haftar's forces were to blame for most of these attacks.

Elsewhere in the capital, the U.N.-supported administration, known as the Government of National Accord, said Haftar fired over 100 rockets and artillery shells on Tripoli’s residential neighborhoods. The health authorities said at least three people were killed and a dozen were wounded in the shelling. The claims could not independently be verified.

Attacks by renegade commander Haftar's forces left the Libyan government "no choice but to respond," according to a statement from the prime minister's press office.

Prime Minister Fayez al-Sarraj criticized the international community for staying silent in the face of the attacks.

"The insane attacks carried out by the war criminal Haftar against the capital Tripoli these days are a sign that he despaired as a result of his successive defeats and that he was nearing the end of his bloody project, which he carried out to take over the administration. The terrible crimes committed by Haftar leave us no choice but to respond with an iron claw by using all our means," said al-Sarraj

Haftar, the leader of illegal armed forces in eastern Libya, have intensified attacks on civilians since the beginning of May as government forces recently gained the advantage and inflicted severe losses on his militants.

He said clashes resumed after the army attacked Haftar's militias stationed in the Salahaddin region in southern Tripoli.

The army targeted points where the militias launched rocket attacks on civilian settlements in Tripoli during the day, he said, and a vehicle loaded with two Grad missile batteries belonging to the militia was destroyed in camp Yarmouk in the south of the city.

Meanwhile, witnesses said there were intense clashes in the Abu Salim and al-Hadba regions south of the capital, and they have seen light traces of the ammunition and heard violent explosions in Tripoli.

At least six civilians were killed in rocket attacks by Haftar's militia at the Mitiga airport in Tripoli, according to the government Saturday.

Parliament accused the United Arab Emirates (UAE) of supporting Haftar and said the UAE "does not care that Libyans are sacrificed."

Haftar's militias are supported by France, Russia, the UAE and Egypt.

The Libyan government has been under attack by Haftar's forces since April 2019, with more than 1,000 people killed in the violence. It launched Operation Peace Storm on March 26 to counter attacks on the capital. The fighting over Tripoli has intensified in recent weeks despite U.N. calls for a cease-fire to allow authorities to focus on curbing the spread of the coronavirus.

In the past few weeks, the GNA has made significant gains against forces loyal to warlord Haftar, supported by France, Russia, the UAE and Egypt, while some provinces announced their support for the official government after months of bombing and shelling by Haftar on civilians, hospitals and schools.

Currently, there are many mercenaries fighting in the conflict who have been brought from Chad, Sudan and Russia. So far, the Janjaweed militia from Sudan, which carried out the fearsome slaughter campaign in Darfur in the 2000s, and mercenaries from Chad, have participated in the war in Haftar's ranks. Previously, the Russian Wagner group, which is owned by businessman Yevgeny Prigozhin, a figure close to Russian President Vladimir Putin, also sent mercenaries to fight in Libya.