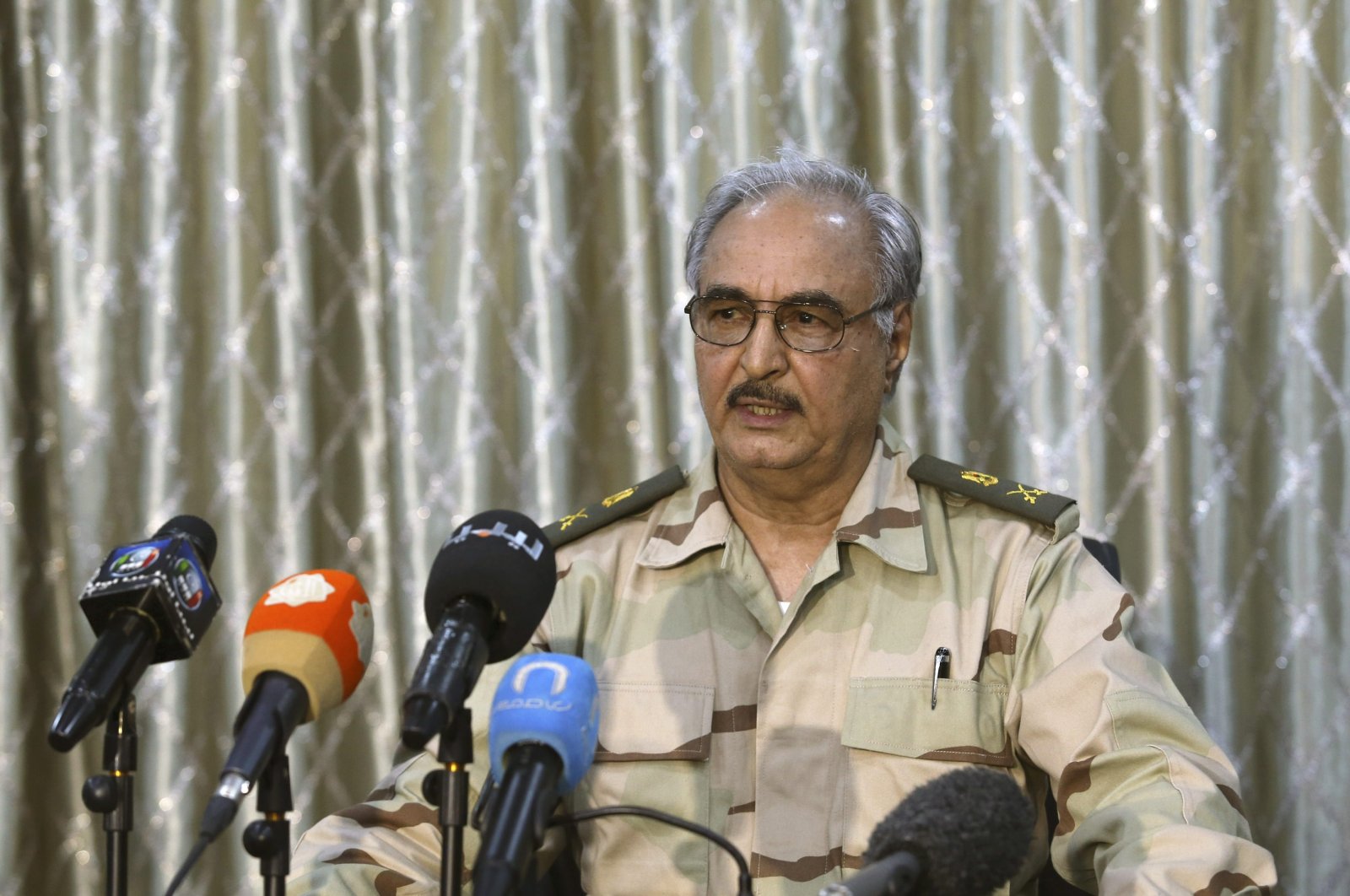 Putschist Gen. Khalifa Haftar speaks during a news conference at a sports club in Abyar, a small town to the east of Benghazi, May 17, 2014. (REUTERS Photo)
by DAILY SABAH May 29, 2020 1:50 pm
Edited By Mustafa Kırıkçıoğlu
RECOMMENDED

Five British mercenaries involved in an operation to fly assault helicopters for putschist Gen. Khalifa Haftar in Libya were offered bounties of up to $150,000 each for their role in the plot that went awry, British The Telegraph said Thursday, citing a secret U.N. report prepared by the Libya sanctions committee.

The men, comprised of former Royal Marines and Royal Air Force personnel, were among 20 foreign mercenaries who traveled to Libya last June in an operation to pilot assault helicopters and speed boats to intercept Turkish ships, it said.

A source with knowledge of the secret U.N. report that revealed the plot told The Daily Telegraph that the men involved were believed to have received sums of “$30,000 to $50,000 a month, or $20,000 to $40,000 per month depending on whether you were pilot or aircrewman.”

Accordingly, the sources claimed that the soldiers and Haftar clashed on the quality of the helicopters provided.

It was indicated that ex-soldier Steven Lodge, who served in the South African Air Force and U.K. army, led the operation. The news article further mentioned that Lodge, who was the director of South Africa-based “Umbra Aviation,” was currently living in Scotland.

The assault helicopters coming from South Africa were transferred through Mozambique, it said, adding that upon The Telegraph’s question regarding the incident, Lodge denied the allegations of the U.N. report.

Another name cited by the newspaper was Andy Furness, an ex-soldier who served in the Royal Air Force and reportedly is now CEO of “Amber Tiger,” an aviation company based in Cheltenham, U.K. He similarly did not respond to repeated requests for comment.

The Telegraph said that the operation under the name “Opus Project” ended in failure four days after the 20 mercenaries arrived in Libya and that all of them had to flee to Malta, leaving the helicopters behind. It further stated that the soldiers were arrested when they arrived in Malta on June 2 but were later released.

Haftar, who has been engaged in a campaign to seize the Libyan capital Tripoli from the official U.N.-recognized Government of National Accord (GNA), is known for his dependency on foreign support and mercenaries. In recent weeks, many reports and footage that Haftar received support from countries including Russia and the United Arab Emirates have emerged.

Most recently, the U.S. has accused Russia openly of supporting Haftar with aircraft against the official government and worsening the situation in the war-ravaged country.

Russian military aircraft are likely to provide close air support and offensive fires for the Wagner Group, a private military company that is supporting Haftar forces against the GNA, the command stated, indicating the presence of Russian mercenaries on the ground in Libya.

Yet, the U.S. and U.N. reports were not the only authorities accusing Haftar of receiving foreign backing for his offensive. Similarly last week, Interior Minister Fathi Bashagha told Bloomberg channel that at least six MiG-29 and Su-24 type Soviet-made jets took off from Hmeimeem air base in Syria and were delivered to Haftar’s forces in Libya.