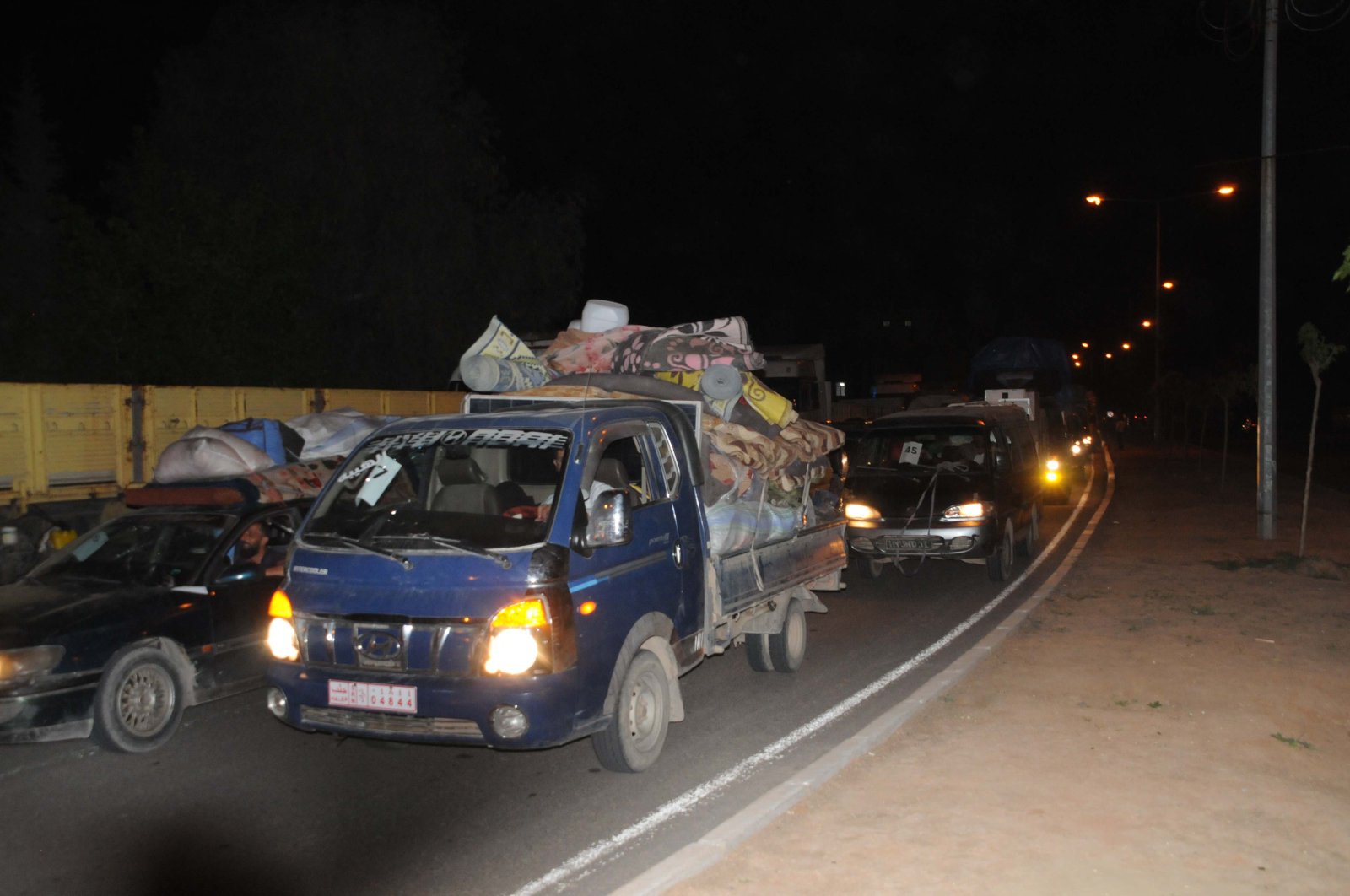 The return of Syrians to liberated northern provinces of war-torn Syria continues as 600 displaced civilians who were forced to flee to northwestern Afrin province due to the YPG/PKK occupation returned to their hometown, the northeastern town of Tal Abyad, on Monday.

Some 150 vehicles carrying displaced families moved from Afrin to Tal Abyad on Monday night. Syrians first arrived in the southeastern Turkish district of Akçakale in Şanlıurfa province. Following procedures to ensure their return process was carried out smoothly, Syrians passed through the Akçakale Border Gate through Tal Abyad.

Previously escaping from the brutalities of the YPG/PKK, thousands of Syrians fled toward Turkey, only to be moved to liberated Afrin province later on. After the liberation of Tal Abyad through Operation Peace Spring last year, the displaced Syrians started to gradually apply to return to their hometown. Following an evaluation by Tal Abyad's local council, formed after the operation, the return of 600 of the displaced Syrians was approved.

In January, about 500 Syrian refugees residing in the northwestern province of Jarabulus, which was also cleansed of terrorist elements during previous operations conducted by the Turkish Armed Forces (TSK), returned to Tal Abyad.

Tal Abyad is populated to a great extent by Arabs and was occupied by the Daesh terrorist group in 2014. A year later, the YPG/PKK occupied the city with the support of the United States. Tal Abyad was cleared of terrorists as part of Operation Peace Spring on Oct. 13. Since then, locals have gradually returned with humanitarian aid being provided with the help of the TSK and the Turkish Red Crescent.

Turkey's efforts to normalize the regions liberated from the YPG/PKK and Daesh terrorists have enabled citizens to return to their everyday life with schools and hospitals reopened and roads built.

After launching three consecutive operations in northern Syria, Turkey rolled up its sleeves to reconstruct hospitals, schools, mosques and roads destroyed by the YPG/PKK. Within the scope of ameliorating the region's social infrastructure, people were given food and clothing by several nongovernmental organizations while roads and buildings were rebuilt.

Turkey is a country that has gained appreciation around the world by virtue of its efforts to assist Syrians who were forced to leave their homes. Hosting more than 3.6 million Syrians and spending billions of dollars on their needs, despite the ongoing conflict, Turkey now looks to establish prosperous settlements and improve the living conditions for Syrians in northern Syria.

Terrorist organizations also left the region littered with bombs and improvised explosive devices in civilian settlements such as in residential buildings and schools, and under bridges and roads. The TSK has been working to detect these explosives and disarm them.