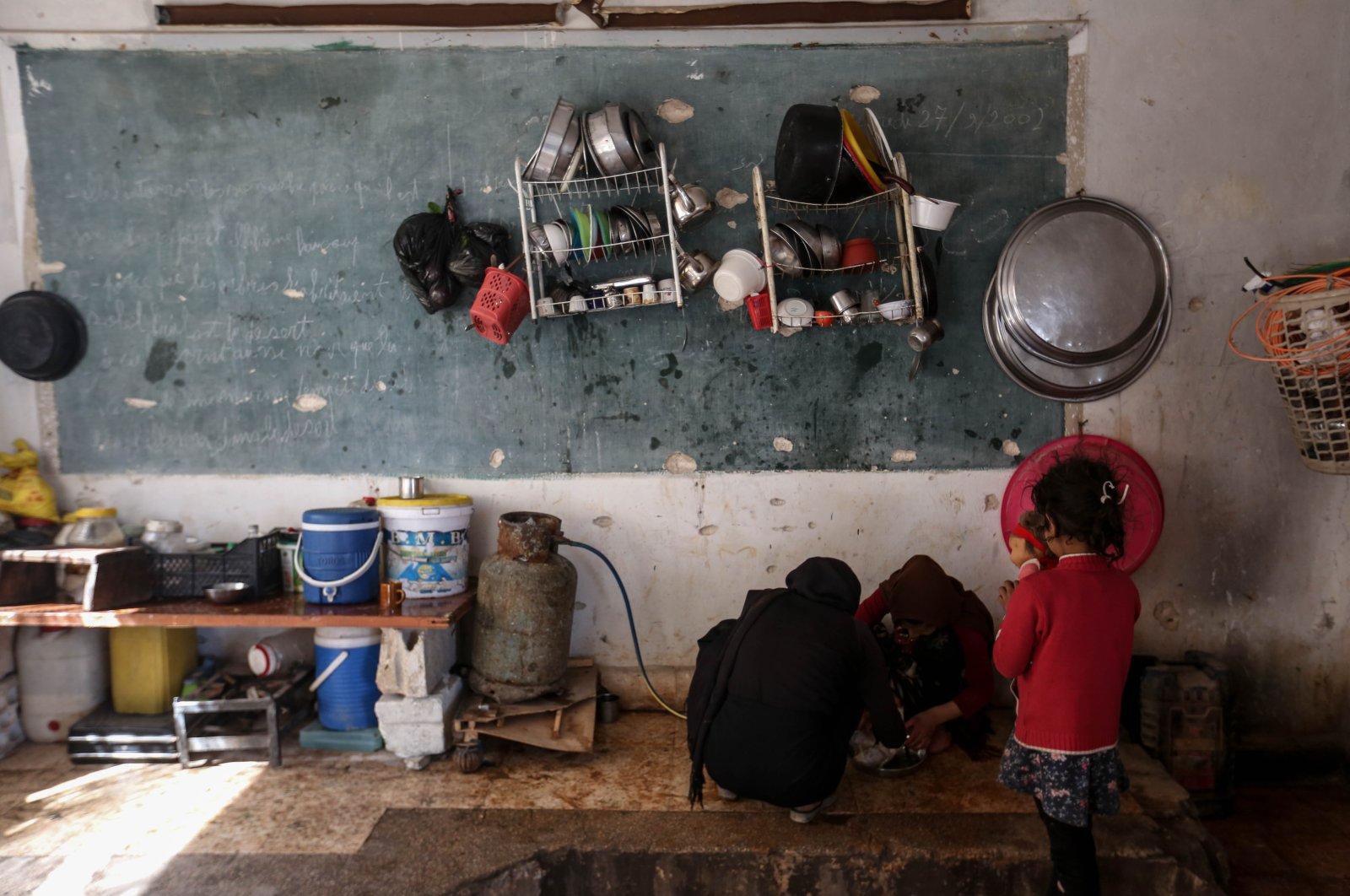 Families staying in bombed-out schools aim to transform the damaged buildings into makeshift homes by using blackboards as a place to hang clothes and turning some classrooms into kitchens, Friday, April 17, 2020. (AA)
by DAILY SABAH WITH AA Apr 17, 2020 12:14 pm
RECOMMENDED

Displaced civilians in northwestern Syria's Idlib province struggle to survive as the lack of shelters has forced many families to take refuge in schools that were bombed by the Bashar Assad regime, with most days passing without any proper food to eat.

Currently, 16 families are living in two heavily damaged schools, located side by side. As many were displaced over the past year due to the Assad regime's systematic attacks against the last opposition stronghold, most families moved toward the Turkish border and settled in camps. However, as the number of displaced escalated, the number of tents in the camps became insufficient to host everyone, forcing some families to look for alternatives. Schools, caves, mosques and even cemeteries become new homes for many civilians.

Families staying in bombed-out schools aim to transform the damaged buildings into makeshift homes by using blackboards as a place to hang clothes and turning some classrooms into kitchens.

Similar scenes can be observed throughout the region as abandoned schools and classrooms host displaced families instead of students. Some newly arriving families have to build tents on the school grounds because the classrooms are full.

Adile Rahmun, 70, who was forced to flee her hometown of Maarat al-Numan alongside with two orphaned grandchildren and her husband, is one of the civilians who has taken shelter in the bombed-out schools.

Speaking to Anadolu Agency (AA), Rahmun said that they are trying to hold on to life with the help of humanitarian aid.

"I, my two orphan grandchildren and husband are staying here. One of my grandchildren visits her other grandmother from time to time. Thanks to beneficence, we are trying to survive in these harsh circumstances," she expressed.

Struggling to find basic necessities, Rahmun said that they had to move more than once to even find this place to stay in.

"There are so many displaced families in Idlib, we have not been able to find a place to stay," she said, adding that before they found these schools, they were staying outside in the open.

"Now, I swear to you, we are sleeping hungry most nights. Since my husband is old, he is unable to work. How shall we live? How shall we survive?" the elderly women asked.

Many civilians from Idlib and Aleppo have been forced to live in open spaces or under trees and in freezing winter conditions which have worsened the grave humanitarian situation.

Fighting has calmed since March when Ankara agreed on a cease-fire with Moscow, which has supported Damascus with heavy airpower, to contain the escalating conflict. The meeting came after regime forces attacked Turkish soldiers and civilians on the ground, prompting Turkey to launch a renewed operation in Syria.