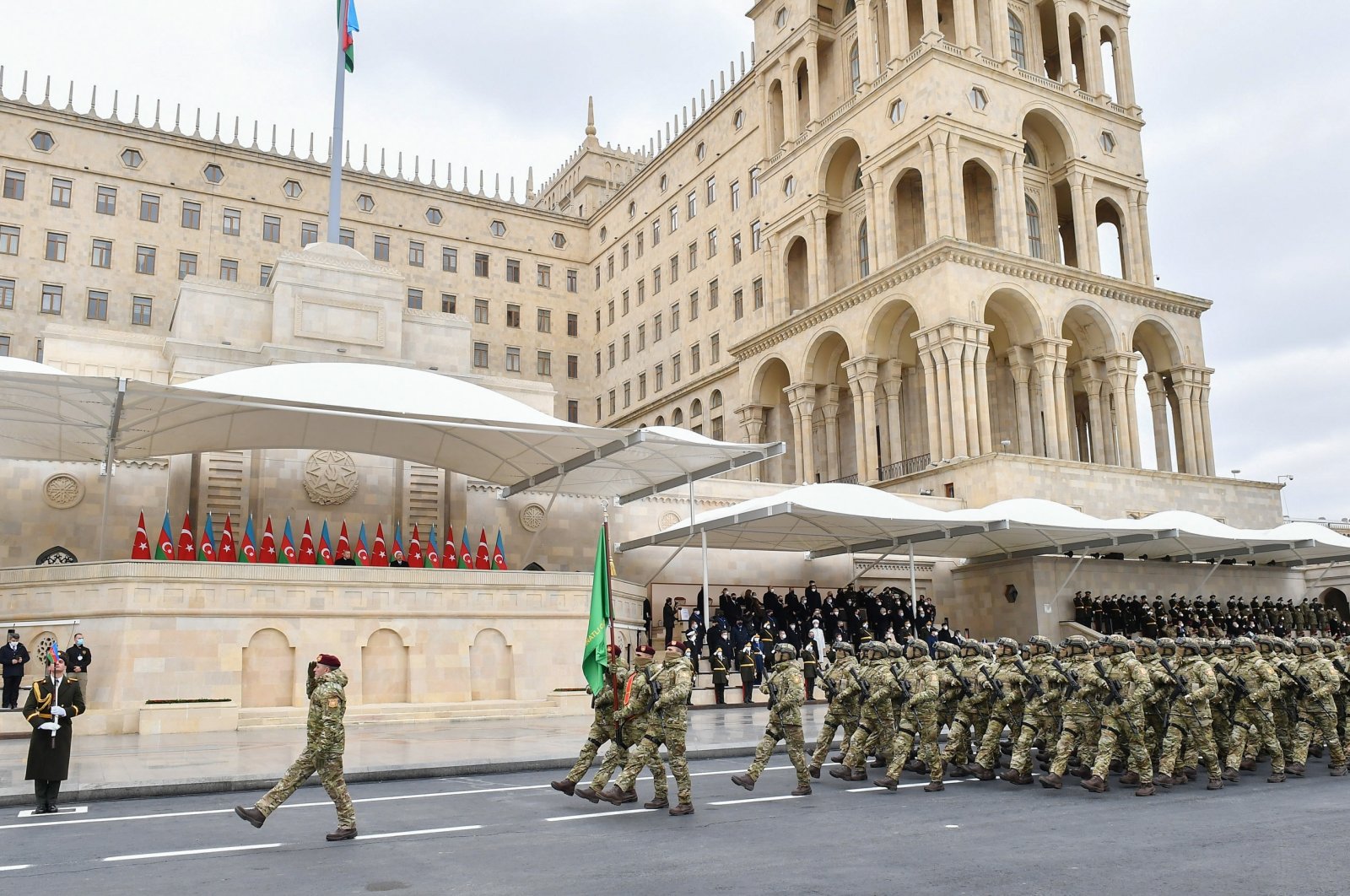 Azerbaijani military marches during a military parade dedicated to the victory in the recent Nagorno-Karabakh conflict, with the presence of visiting Turkish President Recep Tayyip Erdoğan, in Baku, Azerbaijan, Dec. 10, 2020. (EPA Photo)
by DAILY SABAH Dec 11, 2020 10:33 am
RECOMMENDED

Turkey as a "fraternal" country and major strategic partner played a "crucial role" in the recent victory of Azerbaijan, Sevil Mikayilova, an Azerbaijani parliamentarian, said Friday.

Statements by senior Turkish political and military leadership enabled Azerbaijan to "feel it is not alone in this battle" and boosted the morale of both the army and the society, Mikayilova said.

She said the people of Azerbaijan "with great honor recall a sincere statement" of the Turkish president on standing alongside Azerbaijan in the recent war, adding that President Recep Tayyip Erdoğan provided Azerbaijan with "enormous support."

The 44-day war was really a crucial one for Azerbaijan to identify its true friends, she commented.

When new Armenia-Azerbaijan clashes erupted on Sept. 27, the Armenian Army launched attacks on civilians and Azerbaijani forces and violated several humanitarian cease-fire agreements. During the 44 days of heavy fighting, Azerbaijan liberated several cities and nearly 300 settlements and villages from occupation.

"President Erdoğan is the most warmly welcomed leader in Azerbaijan, with whom people in my country sympathize as a true friend of Azerbaijan. Turkey is a fraternal country and the closest ally (of Azerbaijan) and this is a victory which both countries share and celebrate," Mikayilova said.

Noting that the nation has traversed a long path of development under the leadership of President Ilham Aliyev, Mikayilova said a national army building was a central matter for a country, particularly with nearly 20% of its territory occupied by neighboring Armenia "in an unneighborly way."

"The glorious victory gained in the 44-day war with Armenia demonstrated brilliant army development in Azerbaijan under the leadership of Commander-in-Chief of the Armed Forces Ilham Aliyev," she said.

Azerbaijani people are proud of their country's "great history" with Turkey, as Ankara has always stood by Baku both in sad and joyful times, Mikayılova pointed out, saying that history has witnessed numerous "glorious periods" of Turkey as a "true friend and brother" of Azerbaijan.

"We well remember the events of 1918, the courage of Turkish soldiers in defending Azerbaijan in that difficult time. Now, after almost a century, we are proud to write another magnificent page in our fraternal relations and common history," she said.

On Sept. 15, 1918, an elite Ottoman force, dubbed the Caucasian Islamic Army, under the leadership of Nuri Pasha (Killigil), was sent to what is today Azerbaijan in the final months of World War I, following a plea from the region's people. The Ottoman forces along with the Azerbaijani National Army protected the country's territorial integrity and liberated Baku 102 years ago from the Armenian and Bolshevik occupation, setting the stage for the country to regain its independence in 1991.

"Turkey and Azerbaijan enjoy unprecedented interstate relations, which is really unique and at a timely mode," Mikayilova said.

Erdoğan attended the victory parade Thursday in the capital Baku as the guest of honor.

The parade was held at the Azadliq Square to celebrate Azerbaijan's recent military success in liberating its region of Nagorno-Karabakh from nearly 30 years of Armenian occupation.

The parade featured over 3,000 personnel, 150 pieces of military hardware, including missiles and artillery systems, air defense systems, unarmed aerial vehicles (UAVs), warships and boats, as well as some of the military equipment seized by the Azerbaijani army from the Armenian forces during the Patriotic War.