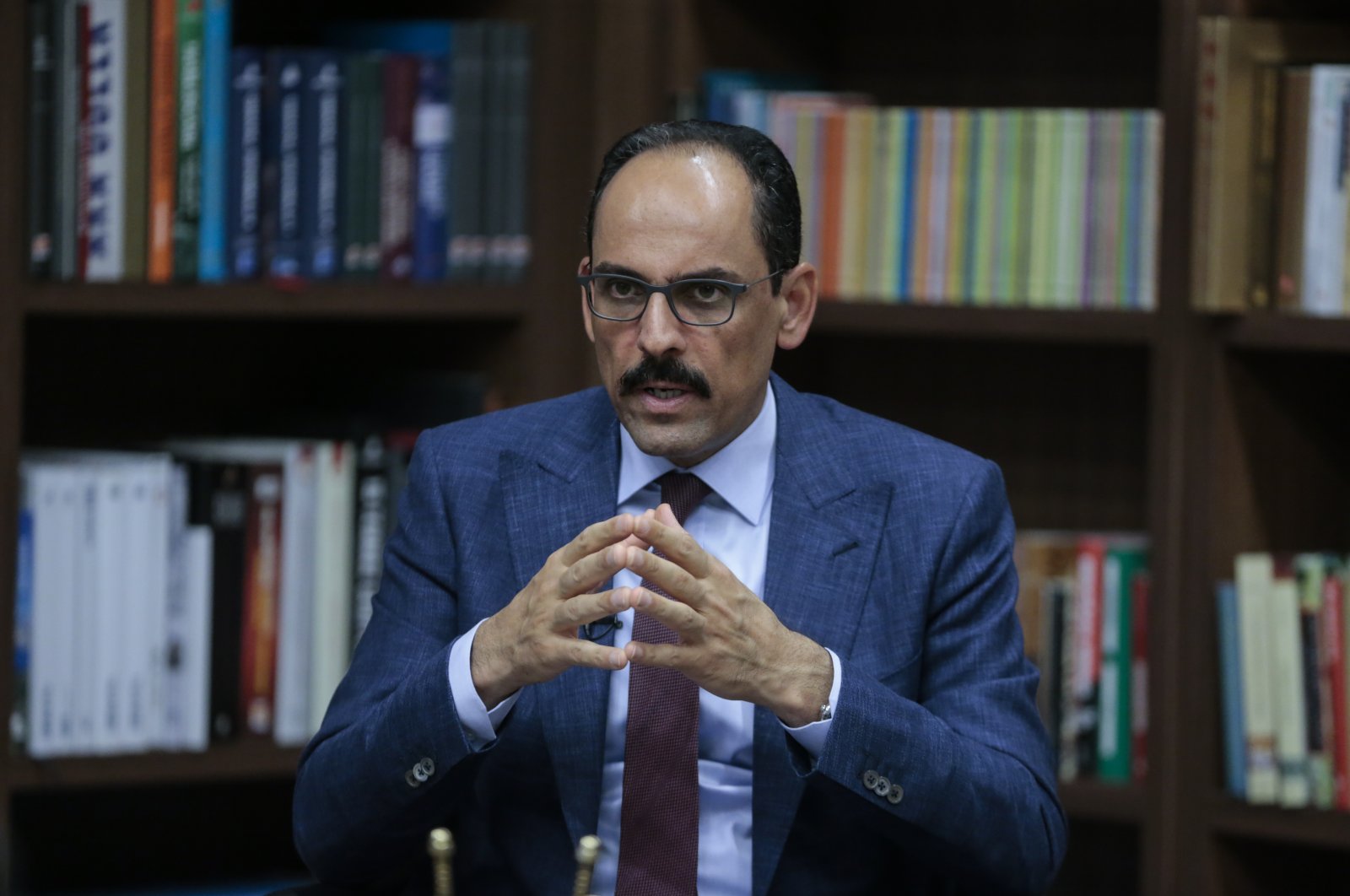 Turkey will continue to support Libya’s legitimate government, Presidential Spokesman Ibrahim Kalın said Wednesday, adding that Ankara will not allow Libya to be turned into a war arena for militia forces and foreign mercenaries.

“Calling on one side for a cease-fire and bombing Tripoli on the other is both a violation of international law and displaying the real intentions of all these processes. If a political solution is to be applied, these military solutions need to be laid aside,” Kalın told Anadolu Agency (AA).

The spokesman reiterated that Turkey is behind the U.N.-backed Government of National Accord (GNA) in the fight against putschist Gen. Khalifa Haftar and underlined that without this support, conflicts would have deepened, a larger number of people would have lost their lives and the partition of Libya would have been inevitable.

Saying that there is currently a bipartite structure in Syria, Kalın said: “We do everything necessary to further primarily the political process under the auspices of the United Nations. On the other side, in the face of the aggressive stance of Haftar, the (Fayez) Sarraj government, the Tripoli government, has the right of self-defense.”

He added that this right is protected under international law. “Thus, our cooperation with them (GNA) is continuing intensely in this manner,” Kalın said.

Haftar, based in eastern Libya, launched an offensive to try to take the capital Tripoli and seize control of the country from the GNA with the backing of Russia, the United Arab Emirates (UAE), Egypt and France. Weapons and mercenaries have poured into Libya to support the warlord, stymieing U.N. efforts to establish permanent peace and stability in a country that has been torn by violence, militias and foreign interests since the 2011 toppling of longtime ruler Moammar Gadhafi.

Yet, Haftar’s unsuccessful 14-month assault was reversed when the GNA gained the upper hand in the war after retaking a number of strategic gems, including the city of Tarhuna and the al-Watiya air base earlier this month. After suffering a series of setbacks, the offensive stalled, and Haftar's forces have since been in retreat. According to the U.N., Haftar’s failed campaign to capture Tripoli set off a humanitarian crisis, with 1 million people in need of aid and almost a half million people internally displaced.

“Whenever Haftar has called for a cease-fire, it has always been the preparation phase of a renewed attack. That is why the Sarraj side does not trust claims of a cease-fire,” he added.

Kalın also underlined that the country has suffered significant losses in terms of oil revenue because of the warlord.

Losses from the closure of Libya's oil wells and the current blockades imposed by Haftar's militias have accumulated to nearly $6 billion over the last five months, the country's National Oil Corporation (NOC) stated recently.
Libya has the largest proven crude oil reserves in Africa at 48.4 billion barrels. Natural gas and oil revenues represent approximately 90% of the government’s revenue.

On the other side, Kalın also highlighted that Libya’s security was significant for Turkey’s security.

“In an age when the term security is globalized, you cannot draw the lines of national security only within national borders. If Turkey’s security is the subject, then this is at the same time related to the security of Iraq, Iran and all our other neighbors as well as the developments in the Mediterranean,” Kalın said, indicating that Libya is Turkey’s neighbor through the Mediterranean.

“Developments in Libya directly affect both the Mediterranean’s security and that of NATO,” he continued, saying that it could have effects, including terrorism or migration.