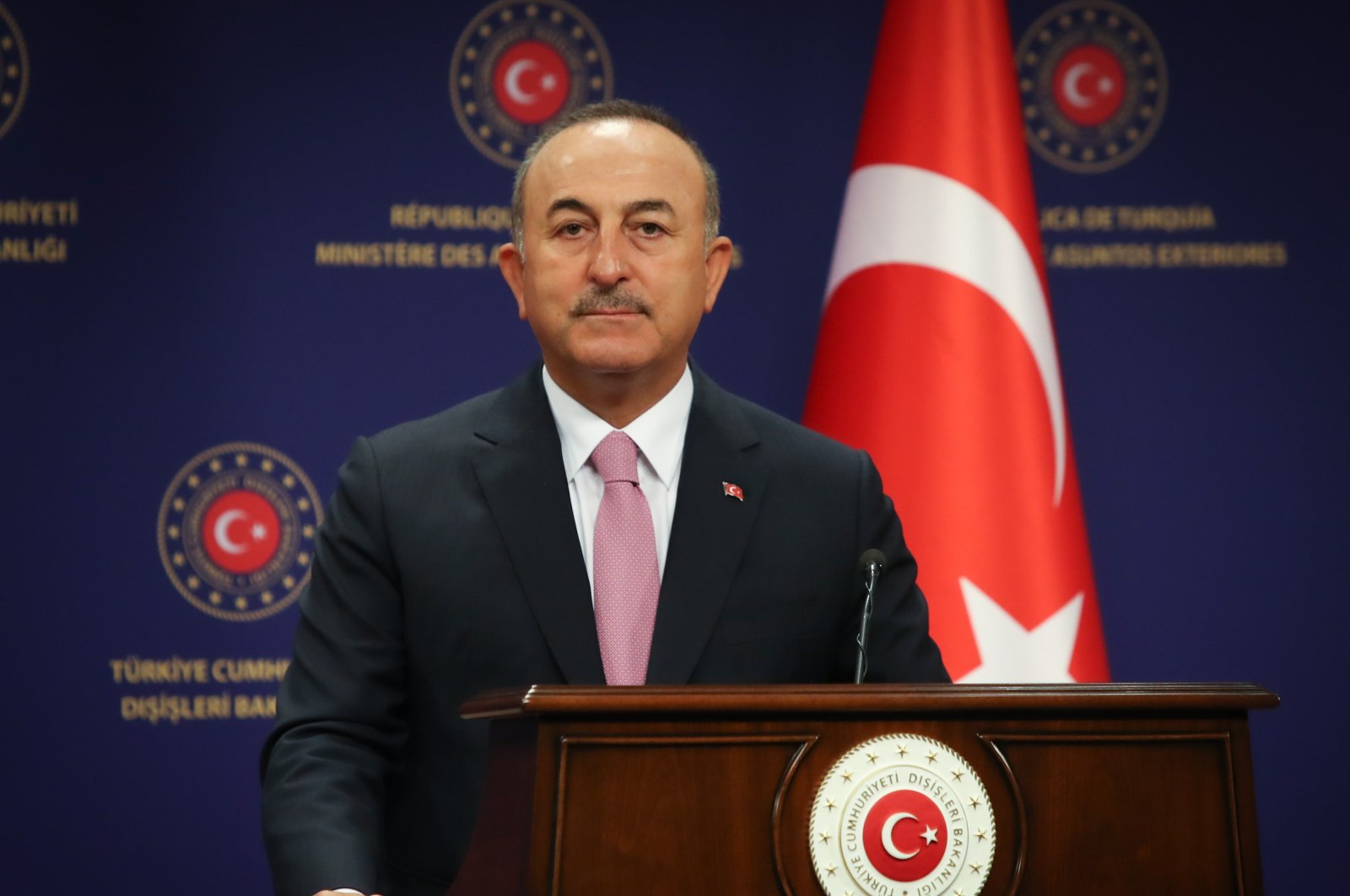 Turkey reiterated Friday its warning to France to end its provocative and colonialist stance in the Eastern Mediterranean, one of the main sources of tension in the region, according to Ankara.

“Who is agitating Greece against Turkey? France. But it has another agenda. Once its plans to establish a terror state in Syria collapsed, it adopted an insolent attitude (against Turkey). Do I need to ask for permission from France while I am waging a war against terrorism?” Foreign Minister Mevlüt Çavuşoğlu said during a speech in Ankara on Friday, referring to French President Emmanuel Macron’s meetings with YPG/PKK representatives in Paris to offer his support.

Ankara has repeatedly called on France to revise this policy and cooperate with Turkey instead of terrorist groups. The YPG/PKK terrorist group, which is responsible for 40,000 deaths in its nearly 40-year terror campaign against Turkey, also has been carrying out a campaign to establish a statelet in northern Syria with the support of France and the U.S.

Paris’ support for YPG/PKK terrorists has not been confined to the diplomatic arena. Turkish officials previously criticized the French cement giant Lafarge’s dealings with the YPG/PKK after company officials were charged but not sentenced over their payments and engagement with terrorist groups. Lafarge’s significant facilities, such as a vast plant in northern Syria’s Jalabiya, a town located close to Ayn al-Arab, have been used as a base and manufacturing site for the group.

Çavuşoğlu also noted that Macron was engulfed by “hysteria” after he was frustrated by Libyan putschist Gen. Khalifa Haftar’s defeat against the U.N.-recognized Government of National Accord, which is mainly backed by Turkey.

“He (Macron) was also talking about harassment of Turkish ships, but he couldn’t prove that and fell into disgrace. If you cannot provide evidence to your claims, you have to apologize,” the Turkish foreign minister said.

A French official claimed in June that the Turkish navy had harassed one of France's warships taking part in a NATO mission in the Mediterranean. However, Ankara proved through video footage and radar images that its ships have not engaged in any such activities in the Mediterranean Sea.

Regarding recent developments in the Eastern Mediterranean, Çavuşoğlu said that Greece has shown that once again it is not suitable for dialogue by not being honest about NATO's mediation.

"Greece’s denial of the NATO general-secretary is noteworthy. It first agreed to the talks with Turkey (over the Eastern Mediterranean), then backed out. It was Greece that lied," Çavuşoğlu said during a speech in Ankara on Friday.

“It was the Greek side that refused to start negotiations without preconditions,” he added.

On Thursday, NATO Secretary-General Jens Stoltenberg announced that Turkey and Greece agreed to enter talks to establish "deconfliction mechanisms" in the Eastern Mediterranean. In a tweet, Stoltenberg said he had discussions with the leaders of both countries, and they will engage in technical talks at NATO to reduce the risk of incidents and accidents in the region.

However, later that day, Greece denied that it had agreed to hold NATO-brokered talks with Turkey.

"Published information claiming Greece and Turkey have agreed to hold so-called 'technical talks' on de-escalating tensions in the Eastern Mediterranean do not correspond to reality," the Greek foreign ministry said.

Çavuşoğlu said Greece would be disappointed if it expects Turkey to give up its rights in the Eastern Mediterranean and accept Athens’ terms.

Greece has disputed Turkey's current energy exploration activities in the Eastern Mediterranean and its attempts to box in Turkish maritime territory based on the proximity of smaller islands to the Turkish coast.

Turkey – the country with the longest coastline in the Eastern Mediterranean – has sent out drillships to explore for energy resources on its continental shelf, saying that Ankara and the Turkish Republic of Northern Cyprus (TRNC) have rights to the natural resources in the region.

“We will protect our rights and the TRNC's. This is our aim. We are open to cooperation with every country around the Mediterranean,” he said.

President Recep Tayyip Erdoğan, meanwhile, held a videoconference call with German Chancellor Angela Merkel on Thursday over regional issues and the developments in the Eastern Mediterranean.

He added that Turkey supports a fair share solution in the Eastern Mediterranean that will create a win-win situation for all littoral states while protecting the rights of Turkey and the TRNC.

Erdoğan said Greece and the Greek Cypriot administration, on the other hand, along with the countries backing them, took steps that have been escalating tensions and contributing further to the deadlock.

The president reiterated that Turkey will always protect its rights and interests against initiatives that violate international law.

He also welcomed Merkel’s contributions to finding a solution to this problem that harms regional peace.

Another meeting over the Eastern Mediterranean was conducted between senior officials from Turkey and the U.S. over a phone call Thursday.

According to a statement by Turkey’s Presidential Spokesman Ibrahim Kalın, he told U.S. National Security Advisor Robert C. O’Brien that Ankara did not desire an escalation in its dispute with other countries in the region.

Rather it supports a model under which all sides could equitably share the region and its resources fairly, as Erdoğan has previously proposed, said the statement.

Kalın also underlined that Greece’s unilateral and maximalist policy, which has served to escalate tensions and ignored international law, is unacceptable and that such approaches should be avoided for there to be a political solution.

Stressing Turkey’s determination to protect its rights and those of the TRNC in the region, he also said efforts will be made to make the Mediterranean a “sea of peace.”

Çavuşoğlu said Macron also tried to discredit Lebanese administration during his Lebanon visit after the Beirut explosion, while Turkey was there to provide help.

“He went there with the manner of a colonialist and humiliated their president, government and people. But we go there to help people in difficult times,” he said.

Last month, Macron came under fire after asking his Lebanese counterpart Michel Aoun to stand aside before making a press statement during his visit to Beirut following the Port of Beirut explosion. In video footage shared on social media outlets, Macron’s aides tell the Lebanese president to step back, while the French president tells him, “See you soon, Mr. President.”

Many users on Twitter slammed Macron for his “inconsiderate” gesture, while others called the move “humiliating.”

Çavuşoğlu also said that France has colonized “wherever it has gone,” adding that most of today’s least-developed countries are former French colonies.

“On the other hand, we are going to these places to revive them. We will continue to enhance our bilateral relations with every country from Africa to Latin America with win-win policies,” he said.