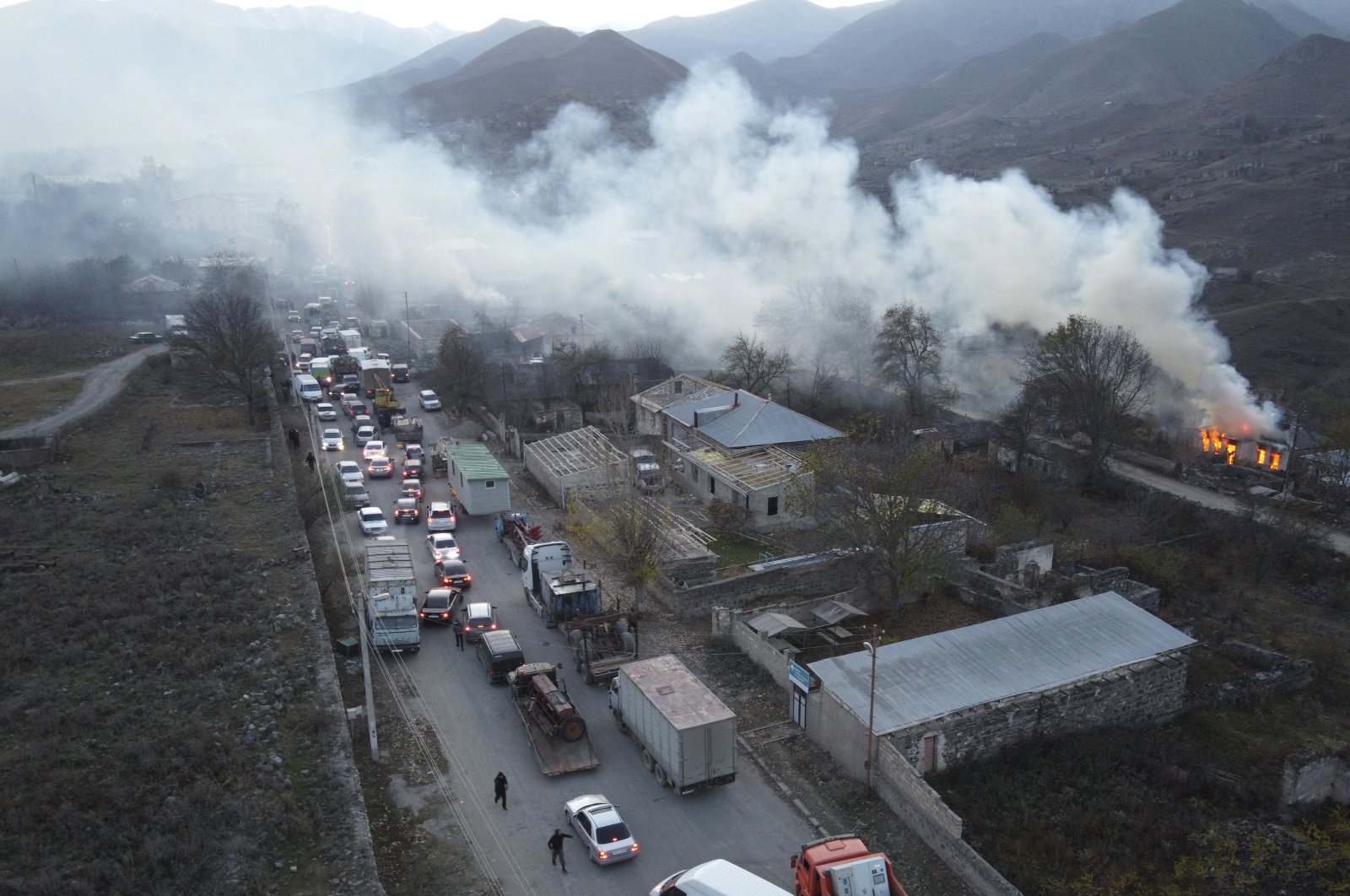 Smoke rises from a burning house as cars and trucks stuck in a traffic jam climbing along the road from Kalbajar leaving the region of Nagorno-Karabakh to Armenia, Nov. 14, 2020. (AP Photo)
by DAILY SABAH WITH AGENCIES Nov 15, 2020 11:59 am
RECOMMENDED

Armenia on Sunday began handing over a liberated territory to Azerbaijan as part of a peace accord that ended six weeks of fierce fighting over the Nagorno-Karabakh region.

Residents of Azerbaijan's Kalbajar district, which was occupied by Armenian forces for decades, began a mass exodus of the mountainous province in the days leading up to the official withdrawal day.

Thick plumes of smoke were seen rising over the valley near the village of Charektar after residents set their homes on fire preferring to leave devastation in their wake and homes that would be uninhabitable by Azerbaijanis.

The withdrawal of Armenian forces from Kalbajar was supposed to be completed by Nov. 15. However, due to difficulties posed by the climate and natural conditions, Azerbaijan on Sunday gave an additional 10 days to Armenia to completely withdraw from Kalbajar.

Earlier this week, a Russian peacekeeping contingent was deployed to Nagorno-Karabakh. They set up checkpoints and positions in the region's administrative center, Stepanakert (Khankendi), as part of the terms of the accord that sees Armenia cede swathes of territory that Azerbaijan's forces gained in the fighting.

Moscow's peacekeeping mission, which the military said included soldiers that previously were stationed in Syria, comprises some 2,000 troops for a renewable five-year mission.

The ex-Soviet rivals agreed to end hostilities earlier this week after efforts by Russia, France and the U.S. to secure a cease-fire fell through during the nearly two months of clashes.

A key part of the peace deal includes Armenia's return of Kalbajar, as well as the Aghdam district by Nov. 20 and the Lachin district by Dec. 1, which have been held by Armenians since a devastating war in the 1990s.

Armenia conceded on Saturday that 2,317 fighters were killed in clashes in which both sides accused the other of targeting civilian infrastructure.

Azerbaijan has not revealed its military casualties and the real toll after weeks of fighting is expected to be much higher.

Russian President Vladimir Putin on Friday said the number of fatalities had surpassed 4,000 and that tens of thousands of people had been forced to flee their homes.

Kalbajar was almost exclusively populated by Azerbaijanis before they were expelled by Armenians in the 1990s war following the breakup of the Soviet Union, and a majority of the homes being abandoned previously belonged to Azerbaijanis. Some 60,000 Azerbaijanis had to leave their homes in 128 villages and took refuge in other parts of Azerbaijan.

Putin told his Azerbaijani counterpart, Ilham Aliyev, on Saturday to take care of Christian shrines in parts of Nagorno-Karabakh that Azerbaijan gets under this week's cease-fire agreement, the Kremlin said.

Putin told Aliyev there were Christian churches and monasteries in areas of the enclave. "In this respect, he (Putin) underscored the importance of securing safety and normal church life of these shrines," the Kremlin said.

Aliyev said that was how Azerbaijan will act, according to the Kremlin.

The peace accord with Azerbaijan has sparked a week of protests in Armenia where demonstrations and opposition parties are calling for Prime Minister Nikol Pashinian to resign.

The former head of Armenia's national security service, Artur Vanetsian, was arrested Saturday on charges of plotting to kill Pashinian and seize power.

A search of the home of a suspect with anti-government views in the Syunik region, southern Armenia, found a large cache of weapons, ammunition and explosives brought from the conflict zone in Nagorno-Karabakh, the Armenian National Security Service said in a statement.

"These serious crimes were uncovered and prevented by the National Security Service," according to the statement that suggested that the suspect agreed with politicians in Armenia and Nagorno-Karabakh to kill Pashinian and usurp power by using the weapons.

Leaders and members of opposition parties and a volunteer unit commander were also detained for allegedly having direct ties to the incident.

Relations between the former Soviet republics of Azerbaijan and Armenia have been tense since 1991 when the Armenian military occupied Nagorno-Karabakh, a territory recognized as part of Azerbaijan and seven adjacent regions.

New clashes erupted Sept. 27 and the Armenian army continued its attacks on civilian and Azerbaijani forces, even violating humanitarian cease-fire agreements for 44 days.

Baku liberated several cities and nearly 300 settlements and villages from Armenian occupation during this time.

Turkey welcomed the truce as a "great victory" for Azerbaijan.

Azerbaijan has demanded Ankara's involvement in the settlement, and Turkish President Recep Tayyip Erdoğan said this week his country would jointly supervise the cease-fire with Russia.

Technical talks between delegations of the Turkish and Russian military have been concluded, the Turkish Defense Ministry said Saturday in a statement in regards to the Nagorno-Karabakh peace deal. The talks are planned to continue in the coming days, the statement read. The Russian delegation arrived Friday in Turkey’s capital Ankara.

Stressing that the body's visit would be limited to investigating the area and reporting on violations, commission head Hakan Çavuşoğlu said: "We all know that even (residents of) Armenian origin suffered and lost their lives (in Armenia's attacks).

"The Armenian attacks on Ganja, Barda and Tartar, where civilian life continued routinely, had no military necessity and are war crimes," he added.

He also criticized international organizations for not responding to the attacks and human rights violations in the region.