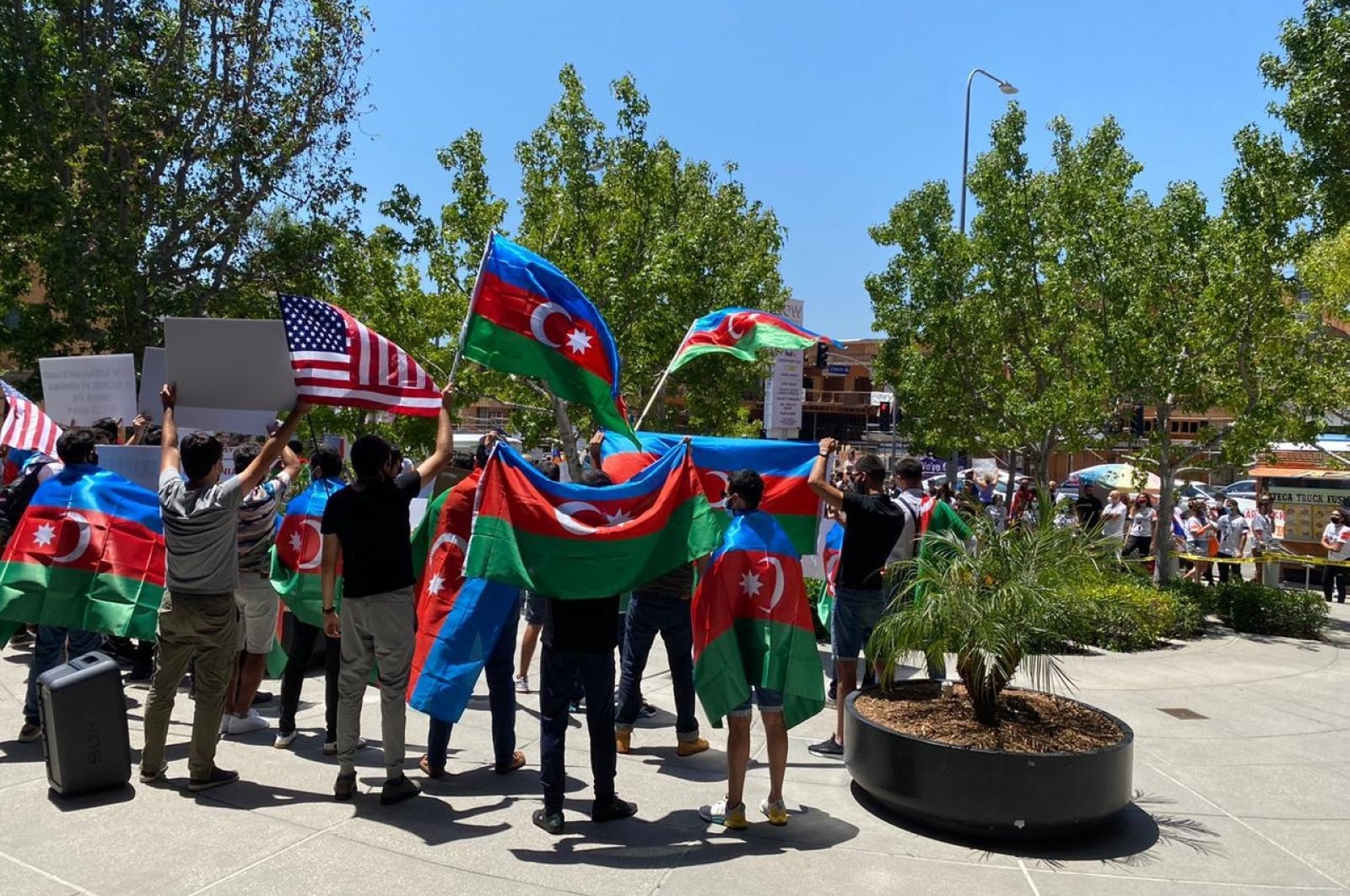 A large group of Armenians living in Los Angeles, California, attacked and injured a much smaller group of Azerbaijanis and Turks who gathered to peacefully protest recent Armenian aggression in the border towns of Azerbaijan.

The incident took place on Tuesday in front of Azerbaijan's Consulate in the city where thousands of Armenians verbally and physically assaulted some 70 Azerbaijanis and Turks across the street, despite tight security measures by the L.A. Police Department.

"Acts of violence by Armenian radicals against a much smaller group of Azerbaijani-American counter protesters in front of the Consulate General of Azerbaijan in Los Angeles are unacceptable and appalling," Elin Suleymanov, Azerbaijan's ambassador to the United States, said on Twitter on Wednesday, wishing a quick recovery to those hurt in the incident.

"This is what Armenian Dashnaks are capable of. Attacking peaceful Azerbaijani protestors, including women," Nasimi Aghayev, Azerbaijan's consul to the western United States, said on Twitter, sharing photos of the injured and hospitalized Azerbaijanis.

He added: "Hundreds of Armenians attacked today a small group of peaceful Azerbaijani counter-protestors in front of our Consulate. 7 Azerbaijanis were injured, 4 hospitalized."

The Dashnaqs are a group of radical, Islamophobic, and Turcophobic Armenians notorious for a series of political assassinations in the 20th century, martyring dozens of Turkish diplomats in the U.S. and across the world.

On July 12, the Armenian army violated a cease-fire and attacked Azerbaijani positions with artillery fire toward the Tovuz border district, withdrawing after losses following retaliation by the Azerbaijani army. During its aggression, Armenia killed 12 Azerbaijani soldiers, including high-ranking officers, and one civilian, besides wounding four troops.

Rash statements from local U.S. officials seeking to win over Armenian votes and lobbying dollars have exacerbated the situation and encouraged Armenian belligerence.

Neglecting his duty to represent all Angelenos, Los Angeles Mayor Eric Garcetti Monday said he stands with the "Armenian community against violence" and urged Azerbaijan to "end its provocative and dangerous threats to strike Armenia's civilian nuclear power plant" – a statement at odds with the real situation, with years of Armenian threats to destroy Azerbaijan's dams and energy infrastructure.

Since 1991 the Armenian military has illegally occupied the Upper Karabakh (Nagorno-Karabakh) region, an internationally recognized territory of Azerbaijan.

Four U.N. Security Council and two U.N. General Assembly resolutions, as well as decisions by many international organizations, decry the illegal occupation and demand the full withdrawal of Armenian forces from Upper Karabakh and seven other occupied regions of Azerbaijan.