Around 35,000 civilians returned to Syria’s Idlib after cease-fire 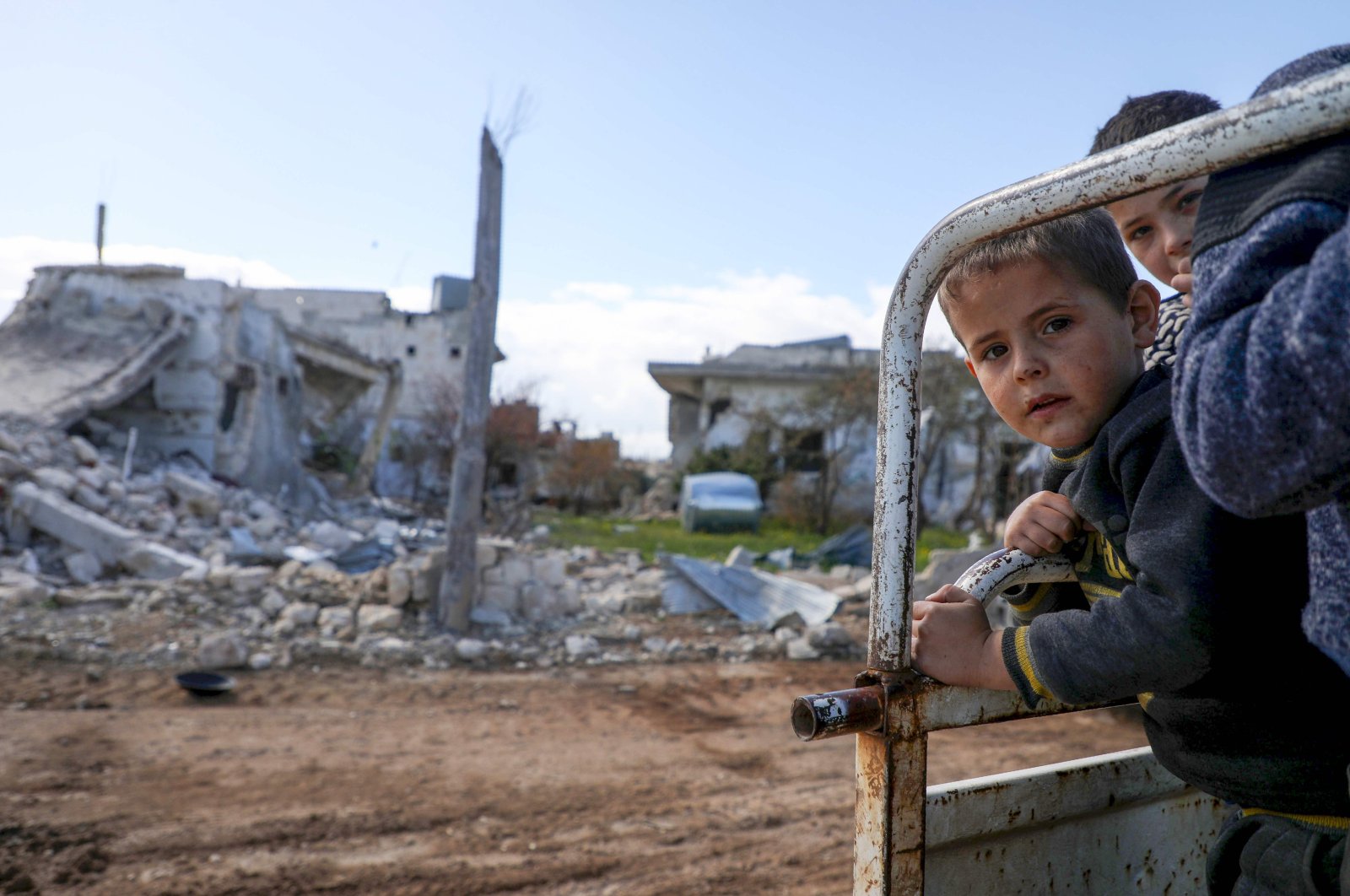 Displaced Syrian boys look toward the camera from the back of their family truck as they visit their home in the village of al-Nayrab, about 14 kilometers southeast of Idlib city and 7 kilometers west of Saraqib in northwestern Syria on Sunday, March 29, 2020. (AFP Photo)
by Daily Sabah with AA
Mar 30, 2020 3:48 pm

Nearly 35,000 people have returned to their homes in Syria's Idlib after being forced to leave due to heavy bombardments and shelling by the Assad regime while some are still too afraid to return

Around 35,000 civilians displaced by the Bashar Assad regime and its backers’ attacks, returned to their homes in northwestern Syria’s Idlib province after the cease-fire deal brokered between Turkey and Russia in early March.

Mohammad Hallaj, director of Syria's Response Coordination Group, who carries out work on migration data in the region, told Anadolu Agency (AA) that some civilians returned after the Assad regime’s operations ceased.

With the Assad regime controlling almost the whole country and the YPG controlling other parts in the northeast, northwestern Idlib province, a de-escalation zone was also established by Turkey and Russia in 2018 and was seen as the last shelter for millions of people. The population of the province had gradually increased with many people running from regime attacks and terrorist torture. However, the displacement of civilians has intensified since mid-December when the Russian-backed Assad regime started a new assault to seize the last opposition bastion. It is estimated that over 1 million Syrians have moved near the Turkish border due to intense attacks over the last year, while half of this number was displaced after November 2019. After heightened tensions, Russia and Turkey earlier this month reached an agreement to halt violence and the flow of displacement. As part of the agreement, all military activities will end in Idlib and a security corridor will be established 6 kilometers (3.7 miles) deep to the north and to the south of the M4 highway.

Hallaj, who underlined that with the advance of the regime, many big civilian settlements have come under the control of the Assad regime and that some of the civilians that fled near the Turkish border did not want to return and instead continued to live in camps.

“On the humanitarian front, we have recorded a slight movement of reverse displacement as civilians headed toward their homes, mostly by civilians who were unable to find suitable shelter elsewhere,” Fadel Abdul Ghany, the founder and chairman of the Syrian Network for Human Rights (SNHR), had told Daily Sabah previously.

The Syrian regime and its allies, Russia and Iran, have consistently broken the terms of the 2018 cease-fire and a new one that began on Jan. 12, launching frequent attacks inside the Idlib province.

As a result, Turkey, which has the second-largest army in the transatlantic NATO alliance, has funneled troops and equipment into the region in recent weeks to stop the Syrian regime advance and avoid the wave of refugees. Around 60 Turkish troops have been killed in clashes in the region in the last month, yet the cease-fire has largely been held since March 5.

Currently, Turkish soldiers are stationed in the region to protect the local population and counterterrorism groups. Still, despite the military escalation, Ankara also has been putting forth efforts to keep diplomatic channels active with Russia in hope of finding a political solution, urging the country to uphold the peace agreements and ensure an immediate cease-fire.

In Syria's northwest, some 3 million people are trapped in a shrinking opposition bastion battered by months of bombardment, especially in Idlib. Hundreds of thousands of people in overcrowded settlements are teeming with fresh arrivals, and many of the displaced are forced to sleep in freezing temperatures in open spaces.

Even though nongovernmental organizations, the United Nations and Turkish institutions and relief organizations struggle to meet the needs of the many civilians in the war-torn country, in the face of the new coronavirus threat, aid is insufficient. In a situation where even the most developed and modern countries are desperate in the fight against the virus, it is hard to expect a country with almost no standing hospital and where children cannot find water to wash their hands to cope with the threat. Only half of the countries’ medical facilities are still operating.