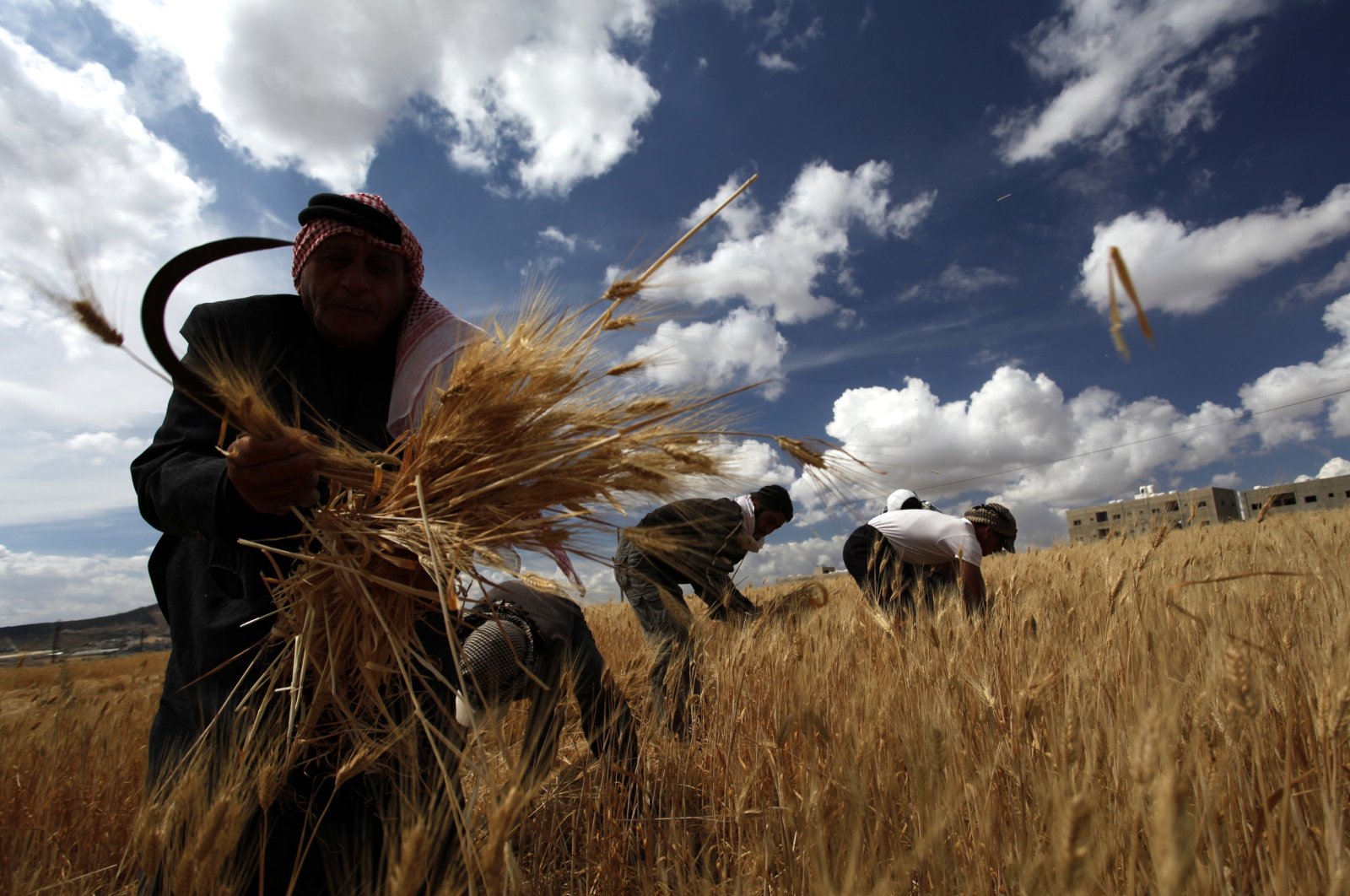 Wheat farmer Mohammed al-Kharabshy (L), 75, harvests his crops with the help of Syrian refugees Khaled, Khalaf, Madeh and Ali Bani Khaled, three brothers and their cousin, on the outskirts of Amman, Jordan, May 15, 2013. (AP Photo)
by Daily Sabah with Agencies
Oct 22, 2020 12:24 pm

The Bashar Assad regime does not have the capacity to deal with the ongoing fuel and wheat crises in areas under its control, according to the leader of Syria's moderate opposition.

Syrian Interim Government President Abdurrahman Mustafa told Anadolu Agency (AA) that the regime’s war against its own people has destroyed the economy and is preventing Syrians from obtaining daily necessities.

Noting that a vast majority of Syria’s oil reserves are located in areas outside the regime's control, Mustafa said the country used to export the resource before the civil war, but the regime has drained all of its assets and budget in its fight against its own people.

“The regime tries to fool people by hiding behind excuses that do not reflect the truth like it always has,” he said, in reference to the U.S. Caesar Syria Civilian Protection Act, which imposes sanctions on the regime.

“But everybody knows that the Assad regime had been struggling to provide fuel and basic necessities before the aforementioned U.S. act went into effect,” Mustafa said.

The Caesar Act is named after a military forensic photographer code-named "Caesar" who leaked pictures of people tortured to death in Assad's prisons in 2014. The act came into force on June 17, 2020.

The first batch of sanctions targets 39 people or entities, including Assad himself and his wife Asma – the first time she has been hit by U.S. sanctions.

Under the law, any assets in the U.S. were to be frozen. Assad has been under U.S. sanctions since he began to crush an uprising in 2011.

Mustafa continued by saying that Syrians living in occupied areas do not believe the propaganda.

“The economy has collapsed in regime-held areas: There is no production or exports,” he said.

Touching on the bread crisis, Mustafa said most of the lands suitable for growing wheat are located in the north and northeast, which are not under Assad's control, and the product grown in regime-held areas does not meet the needs of the people. The Assad administration also tried to buy wheat from Russia, but it was unable to afford it, according to the opposition leader.

The Syrian pound, which held steady at around 500 to the dollar for several years, went into a free fall last year, hitting a low of 3,000 in June, in anticipation of fresh sanctions.

That currency drop is hindering Assad's plans for buying up all of this year's wheat to make up for a shortfall in imports that is drawing down on strategic reserves.

Before the war, Syria could boast more than a year of wheat reserves.

People have been forming huge lines to purchase bread and fuel, as the regime doubled the latter’s prices in the past two weeks and has imposed a limit on the amount of bread people can buy, which consequently tripled its price on the black market.

The regime has historically lured farmers to sell it their crops by paying a higher price than competitors, even as the wheat remained in areas outside its control.

This year, with the collapse of the Syrian pound, it has upped its price from the 225 pounds a kilogram announced at the beginning of the season to 425 pounds.

Syria's war has devastated the country's economy since 2011, plunging 80% of its people into poverty, according to the United Nations. Despite relative quiet in the nation's remaining battlefields, early 2020 has only seen the situation worsen. Much of the economy in regime-held areas shuttered in March to prevent the spread of the coronavirus. The World Food Programme (WFP) said food prices had doubled in a year to an all-time high across Syria. Over that same period, people in regime-held areas have faced fuel crises, a plummeting Syrian pound on the black market and steep price hikes. Damascus has blamed Western sanctions for its struggling economy.