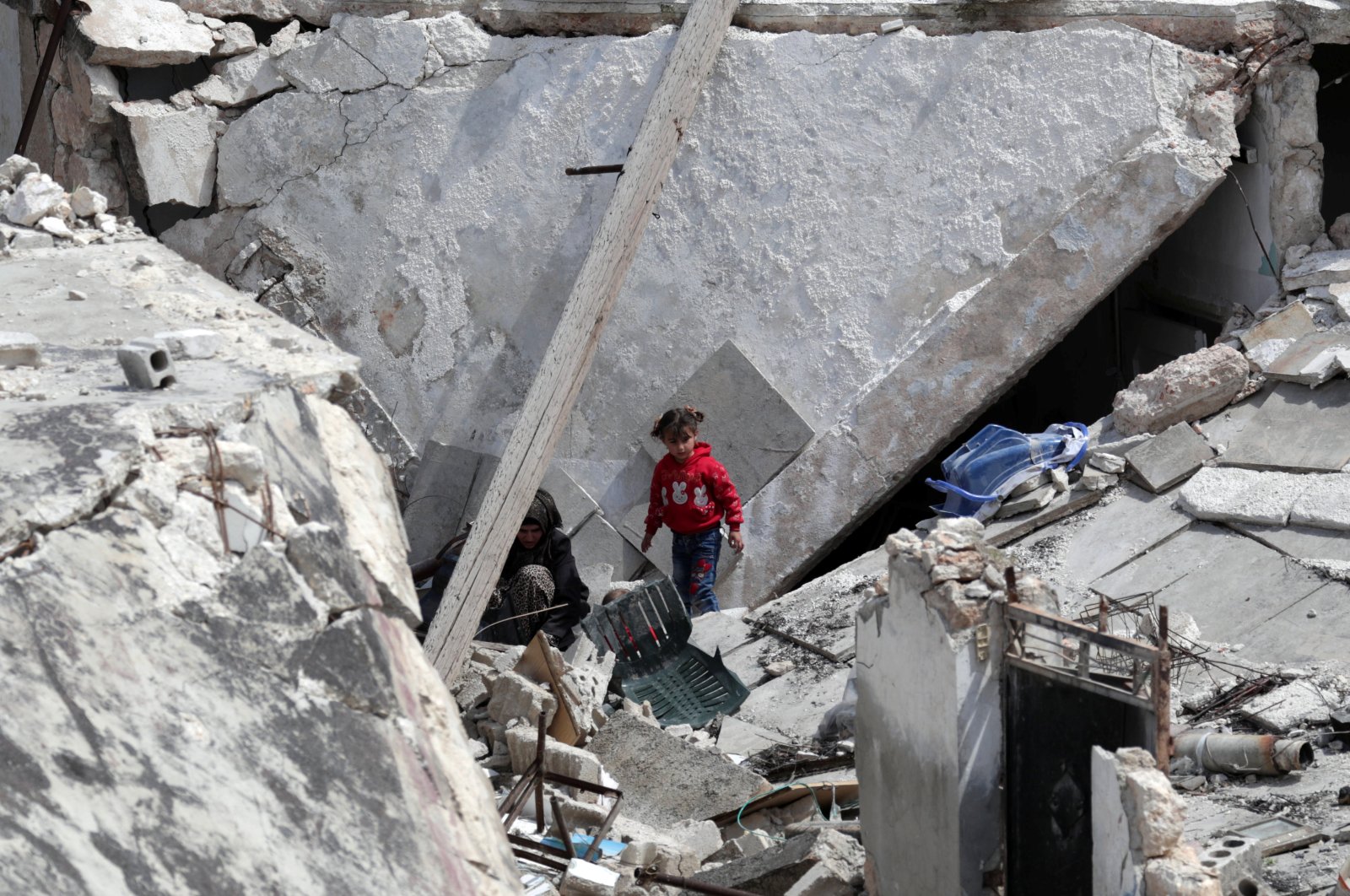 A girl stands near a woman on the rubble of a damaged building in the opposition-held town of Nairab, in northwest Syria’s Idlib region, Syria April 17, 2020. REUTERS
by compiled from agencies Apr 20, 2020 10:48 am
RECOMMENDED

When Anwar al-Bunni crossed paths with fellow Syrian Anwar Raslan in a DIY store in Germany five years ago, he recognized him as the man who had thrown him in jail a decade earlier.

On Thursday, the two men will face each other in a German court, where Raslan will be one of two alleged former Syrian intelligence officers in the dock accused of crimes against humanity for Bashar Assad's regime.

In the first legal proceedings worldwide over regime-sponsored torture in Syria, Raslan will be tried under the principle of universal jurisdiction – which allows a foreign country to prosecute crimes against humanity.

For Bunni, speaking to Agence France-Presse (AFP) in Berlin, the trial will send "an important message" to the Assad regime: "You will never have impunity, so think about it!"

Germany has taken in more than a million asylum-seekers, many fleeing war in Syria and Iraq, and as a result, it can sometimes become a surreal arena where victims run into their erstwhile torturers in the street.

Raslan, a former colonel, arrived in Germany as a refugee himself in July 2014, having deserted the Syrian regime army two years earlier.

Bunni said Raslan was the man who arrested him at his Damascus home in May 2006 and threw him in a regime prison, where the lawyer spent five years until he was freed during the Syrian uprising in 2011.

The two men arrived in Berlin within two months of each other, and crossed paths when they were briefly staying in the same center for asylum-seekers.

"I told myself that I knew this man, but I didn't recognize him instantly," Bunni told AFP, drawing on an e-cigarette.

A few months later, he came face to face with his alleged captor once again, this time in a store, and finally recognized him.

A Syrian lawyer in his sixties, Bunni was an indefatigable advocate for human rights in his home country but has now lived as a refugee in Berlin.

Unable to pursue his profession in Germany, he now collects evidence and testimonies against the regime.

While Bunni will not be one of the plaintiffs in Thursday's trial, he is a respected figure in Germany's 700,000-strong Syrian community and has convinced numerous victims to come forward.

In 2016, when he started working with local lawyers, Bunni learned that German investigators already had their eye on Raslan, who was arrested in February 2019.

Raslan now stands accused of having overseen the murder of 58 people and the torture of 4,000 others while in charge of the Al-Khatib detention center in Damascus between 2011 and 2012.

Previously, a former Syrian army photographer known by the pseudonym "Caesar" fled the country in 2013, taking with him some 55,000 photographs documenting abuse and torture.

The dossier is being used by international bodies, including the United Nations, as part of an investigation into the regime's role in "mass torture."

Another Syrian, 43-year-old Eyad Al-Gharib, is accused of having been an accomplice.

"This is not about revenge, it is about exposing the truth," German lawyer Patrick Kroker told AFP.

He represents six Syrian plaintiffs, who may be joined by two more women.

Now refugees in various European countries, these victims of torture by the Damascus regime "want the world to learn about what happened there," said Kroker.

All those who are set to testify in Koblenz were "subjected to physical mistreatment, in some cases very brutally and over a long period" in the regime prison, said Kroker.

Many victims have preferred to remain silent, terrified of reprisals against friends and family members back in Syria, or of retribution from regime agents in Europe.

The monitoring group Syrian Observatory for Human Rights says at least 100,000 people have died from torture or harsh conditions in regime custody since the conflict began.

Torture by the Bashar Assad regime forces made up 14,070 of this number, including 173 children and 45 women. The report stressed that the figures consisted of only those that can be identified and that the real death toll is much higher.

For Bunni, the fight is far from over.

Around a thousand Syrians implicated in the crimes are now living carefree lives in Europe, he claimed.

Meanwhile, people are still being tortured at the Al-Khatib prison, he added.

The witnesses in Koblenz are speaking not only for themselves but also for their fellow victims, said Kroker.

"Most of them said: 'I am also doing this ... to make it clear what this means for many others who perhaps can't be here, either because they are still imprisoned, because they have to be afraid, because they can't come to Europe or because they died under torture,'" he added.

In February 2016, U.N. investigators said, "The mass scale of deaths of detainees suggests that the government of Syria is responsible for acts that amount to extermination."

Human rights groups in March this year warned of a "catastrophe" if the coronavirus pandemic hit the regime's overcrowded and squalid prisons, where inmates are crammed into cells and often denied medical care.