At least 29,000 children died of cold, displacement, conflict since beginning of Syrian war 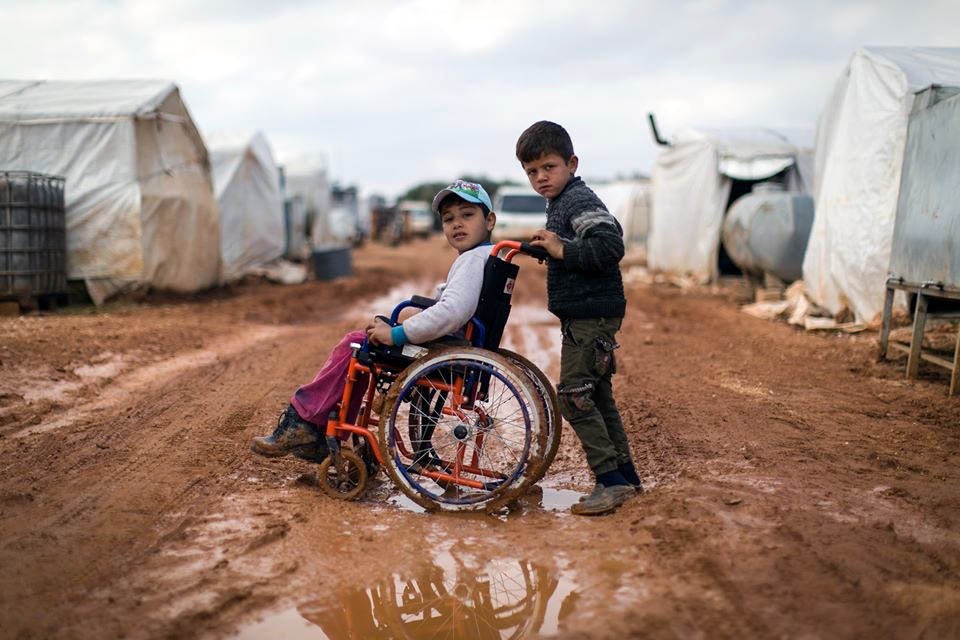 Children continue to pay a heavy price for the Assad regime's campaign to seize more territory, as they struggle to survive in harsh winter conditions with nowhere to flee

At least 29,000 children have died since the outbreak of the Syrian war which constitutes one of the biggest humanitarian tragedies in the world. The war has claimed the lives of hundreds of thousands, according to the U.N. these numbers are expected to rise amid a recent escalation in violence. The Syrian Network for Human Rights (SNHR) in a report said Daesh, the YPG-led Syrian Democratic Forces (SDF), the Bashar Assad regime, Russian forces, Iranian militias and the Hayat Tahrir al-Sham (HTS) terrorist group were mainly responsible for these deaths.

As civilians fleeing from conflict zones try to find shelter in safe zones near the Turkish border, they face new challenges regarding the lack of hygiene, food, water, heating and housing added with the harsh winter conditions. Some 167 Syrian citizens, including 77 children, have died due to the cold since March 2011, the SNHR announced in a report last week.

Most recently, a picture of a frozen 18-month-old girl circulated on social media last week, displaying once again what the U.N. calls a “manmade horrifying disaster.” Due to the bombardment of regime forces led by Bashar Assad in Idlib, Iman Ahmed Laila's family was living at a refugee camp in the northwestern city of Afrin. Laila succumbed to the extreme conditions at the temporary settlement last Thursday. In a statement, the Syrian American Medical Society said the child had died from the freezing cold while her father was trying to bring her to the hospital on foot before reaching the Al-Shifa health center.

“The issue of deaths and injuries due to the cold is closely related to the issue of forced displacement, and we are making a distress call to save hundreds of thousands of displaced persons in tents, and to create international pressure,” said Fadel Abdul Ghany, chairman of the SNHR.

The latest assault of the Assad regime and Russia, have displaced at least 900,000 people in northwestern Syria’s Idlib, according to U.N. figures, constituting the biggest one-time displacement since the start of the war. Idlib is the last opposition stronghold still trying to resist the attacks of the Assad regime to seize control of the province. The northwestern provinces have been particularly on Assad’s radar as the strategic M5 and M4 highways cross through the region.

“Almost 170,000 of those newly displaced people are estimated to be living in the open or in unfinished buildings while some 284,000 are staying in camps already overstretched beyond capacity or in makeshift camps where they set up individual tents with no basic services,” stated a report Thursday by the U.N. Office for the Coordination of Humanitarian Affairs (OCHA). The report added that desperate civilians try to burn whatever they find in an attempt to get heat, which can cause deaths from toxic fumes.

It has been months now since regime forces sped up attacks on Idlib, the last opposition stronghold in the war-torn country, targeting innocent civilians under the pretext of fighting terrorists. However, the regime is not alone in its attacks, ongoing since April 2019. As its backer, Russia is often active on the ground aggravating the humanitarian crisis.

As the Assad regime advances further in northwestern Syria, seizing control of many villages and towns, places previously considered safe by civilians, are now coming under fire.

“On 14 and 15 February, one person was killed, and many others were injured when two IDP sites were hit in the Dana sub-district. These locations received some 267,000 displaced people recently and were home to more than 712,000 people before the latest wave of violence. Nevertheless, people from areas such as Atareb and Daret Azza, now at the frontlines, continue to flee further into northwest Idlib and northern Aleppo governorates as heavy bombardment impact their communities,” OCHA stated.

According to the United Nations Human Rights Council (OHCHR), some 300 people were killed in Idleb and Aleppo due to hostilities from Jan 1. to Feb 18., many of them women and children.

Not only are the living conditions harsh after civilians find a safe place to hide but the road to get there is also becoming increasingly difficult. The freedom of movement of civilians from Idlib to northern Aleppo is increasingly under threat. As bombardment extended to the Daret Azza area, the roads leading to one of the two crossings between the Idlib area and northern Aleppo governorate reportedly came under fire, making it extremely dangerous for civilians to move via this route, OCHA explained.

The White Helmets civil defense group has also frequently reported that forces loyal to the regime were deliberately targeting civilians on the run.