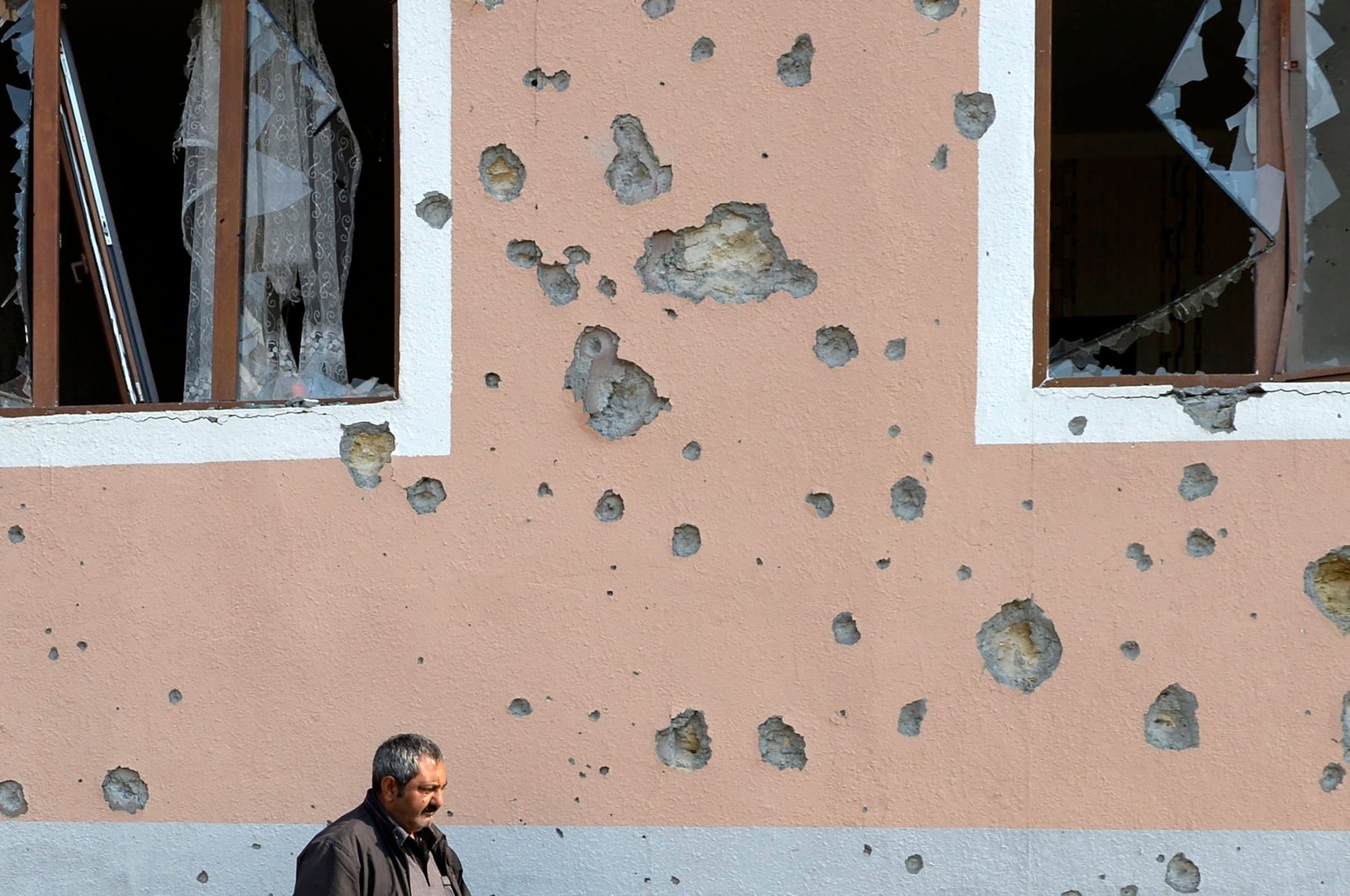 A man walks in front of a residential building damaged in Armenian shelling during the ongoing military conflict between Armenia and Azerbaijan over the Armenian-occupied region of Nagorno-Karabakh, in the town of Terter, Nov. 1, 2020. (AFP Photo)
by DAILY SABAH WITH AGENCIES Nov 01, 2020 12:02 pm
RECOMMENDED

Azerbaijan has established outposts in areas liberated from Armenia's occupation near the Iranian border as clashes over the Nagorno-Karabakh region continue despite fresh diplomatic attempts for a cease-fire.

The Azerbaijani flag was hoisted over the Soltanli, Khalafli, Khudafarin and Gumlag outposts in the Jabrayil and Zangilan districts, and the nation's soldiers started to work from there.

On Oct. 22, Azerbaijani President Ilham Aliyev announced that the border between his country and Iran was completely secured after the liberation of the Agbend settlement.

In the announcement, Aliyev congratulated the people of Iran for being on the side of the Azerbaijani people.

To date, at least 91 civilians, including 11 children and 27 women, have been killed by Armenian attacks, according to Azerbaijan's Chief Prosecutor's Office.

About 400 people, including at least 14 infants, 36 children and 101 women, have also been injured in the attacks.

At least 2,442 homes, 92 apartment buildings and 428 public buildings have been damaged and become unusable, the authority also said.

Yerevan and Baku once again accused each other of bombing residential areas on Saturday, in defiance of a pact to avoid the deliberate targeting of civilians in and around the mountain enclave of Nagorno-Karabakh.

Shelling was reported by both sides within hours of the latest agreement to defuse the conflict was reached. A meeting in Geneva included the two countries' foreign ministers and envoys from France, Russia and the United States, which are the co-chairs of the Organization for Security and Co-operation in Europe's (OSCE) Minsk Group.

Baku and Yerevan's top diplomats agreed on Friday not to target civilian populations or non-military objects, according to a statement from the Minsk Group after it had mediated hours of discussions.

Meanwhile, Moscow on Saturday pledged to provide "necessary" help to Yerevan in the conflict if fighting reaches Armenian territory after its ally requested security assistance.

"Russia will render Yerevan all necessary assistance if clashes take place directly on the territory of Armenia," the Russian Foreign Ministry said, calling on the warring sides to immediately halt the violence.

In his letter to Putin, Pashinian said hostilities are approaching Armenia's borders, reiterated Turkey's backing of Baku and invoked a 1997 treaty on friendship, cooperation and mutual assistance between Moscow and Yerevan.

"The prime minister of Armenia has asked the Russian president to begin urgent consultations with the aim of determining the kind and amount of aid which the Russian Federation can provide Armenia to ensure its security," the foreign ministry said.

Moscow's defense pact with Armenia does not, however, extend to Nagorno-Karabakh, and Russia said Saturday that "necessary" help would only be provided if the fighting reaches Armenian territory.

At the same time, foreign ministry spokesperson Maria Zakharova said "concrete formats" of assistance to Armenia would be discussed.

Russia has a military base in Armenia's second-largest city of Gyumri.

The Russian foreign ministry also called on the warring sides to immediately halt the fighting and begin "substantive" talks.

In an apparent warning to Moscow, Aliyev said on Twitter that "we do not want third countries to get involved."

"This is a fight between us and Armenia," he added.