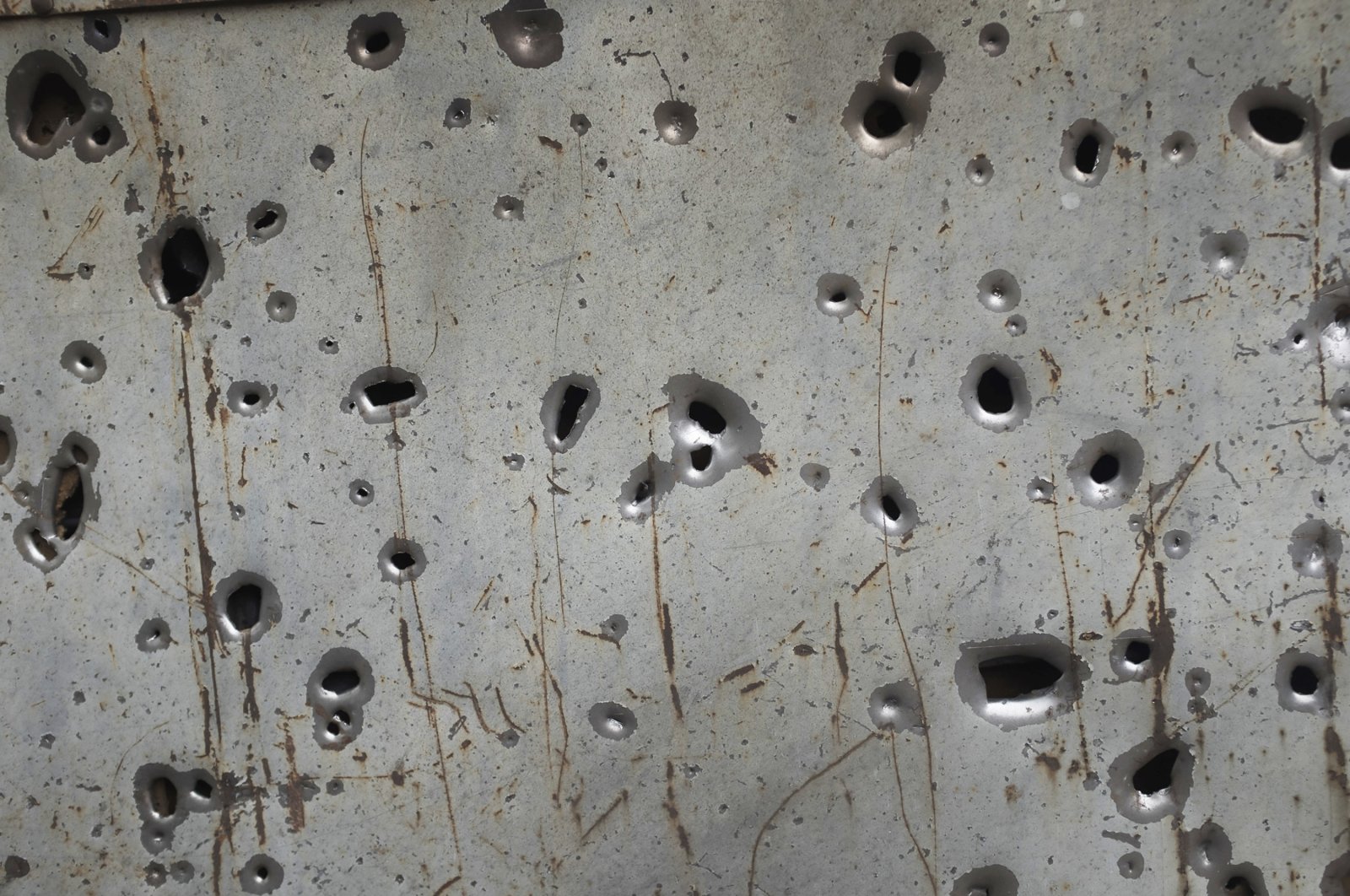 Shrapnel holes are seen in a fence in the Hadrut province of Armenian-occupied Nagorno-Karabakh, Azerbaijan, Oct. 1, 2020. (AP Photo)
by DAILY SABAH Oct 02, 2020 11:25 am
RECOMMENDED

The Azerbaijani army liberated some critical points in the western Aghdara province from Armenian occupation as border clashes entered their sixth day and Yerevan expressed readiness to work with mediators for a cease-fire.

The Azerbaijani defense ministry on Friday said in a statement that the army forced the Armenian army to withdraw from the Jabrayil-Fuzuli region, adding that some strategic hills in Aghdara’s Madagiz region were also liberated from occupation. During night clashes, five Armenian armored vehicles were destroyed and a large number of soldiers killed, it added.

The success in clashes and the liberation of various strategic positions boosted the fighting spirit and determination of the Azerbaijani soldiers, it underlined.

In a separate statement, the ministry said that the Azerbaijani villages of Hindiristan, Alibeyli, Ahmadaghali and Safarli, in the Aghdam region, have faced some intense attacks by Armenian forces, which resulted in civilian deaths and injuries.

Underscoring that Armenia carried out rocket attacks on Azerbaijani territories from the Gorus region, it said Azerbaijan will make the necessary retaliatory response.

The Azerbaijani Armed Forces seized a large number of weapons, ammunition and vehicles belonging to the Armenian military in an operation to liberate its territory under occupation. According to Anadolu Agency (AA), Armenian soldiers fled their positions in the face of the Azerbaijani advance, leaving behind their weapons and military vehicles. Among the seized military vehicles were Russian-made 2019-model Ural trucks.

While most of the trucks were still usable, some bore marks from the clashes. Most of the weapons and ammunition, including machine guns, grenades, rocket launchers and bullets of various firearms, were also Russian-made.

The Azerbaijani forces also seized some documents belonging to the Armenian army.

Azerbaijan's parliament declared martial law in some of its cities and regions following Armenia's border violations and attacks in occupied Nagorno-Karabakh.

Armenia on the same day expressed readiness to work with international mediators to clinch a cease-fire with Azerbaijan.

Armenia "stands ready" to engage with France, Russia and the United States, which co-chair the Organization for Security and Co-operation in Europe (OSCE) group of mediators to the conflict, "to reestablish a cease-fire regime," the foreign ministry in Yerevan said.

The ministry warned that while it would welcome such peace talks, Azerbaijan's "aggression against Nagorno-Karabakh will continue to receive (Armenia's) strong and resolute response."

France, Russia and the U.S., co-chairs of the OSCE's Minsk Group, set up in 1992 to mediate in the conflict between Azerbaijan and Armenia over the mountainous Nagorno-Karabakh region in the South Caucasus, called for an immediate cease-fire Thursday.

Following Yerevan's statement that it will work with mediators after international calls for calm, Turkey's Defense Minister Hulusi Akar on Friday stated that "cease-fire calls, which could not provide a solution to Azerbaijan's rightful case in Nagorno-Karabakh, are neither sincere nor are they convincing."

Akar reiterated support for Azerbaijan in regaining its occupied territories.

Russia said on Thursday its foreign minister Sergey Lavrov and Turkish counterpart Mevlüt Çavuşoğlu had confirmed in a phone call they were ready for "close coordination" to stabilize the situation in Nagorno-Karabakh.

The Russian foreign ministry said both confirmed "readiness for close coordination of the actions of Russia and Turkey to stabilize the situation with the aim of returning the settlement of the Nagorno-Karabakh conflict to the channel of peaceful talks".

Russia's diplomatic statement came after President Recep Tayyip Erdoğan said earlier Thursday that a cease-fire was only possible if Armenian-backed forces withdrew from the occupied region and the rest of Azerbaijan.