Azerbaijan retaliates against Armenian separatists after rocket fired from Stepanakert 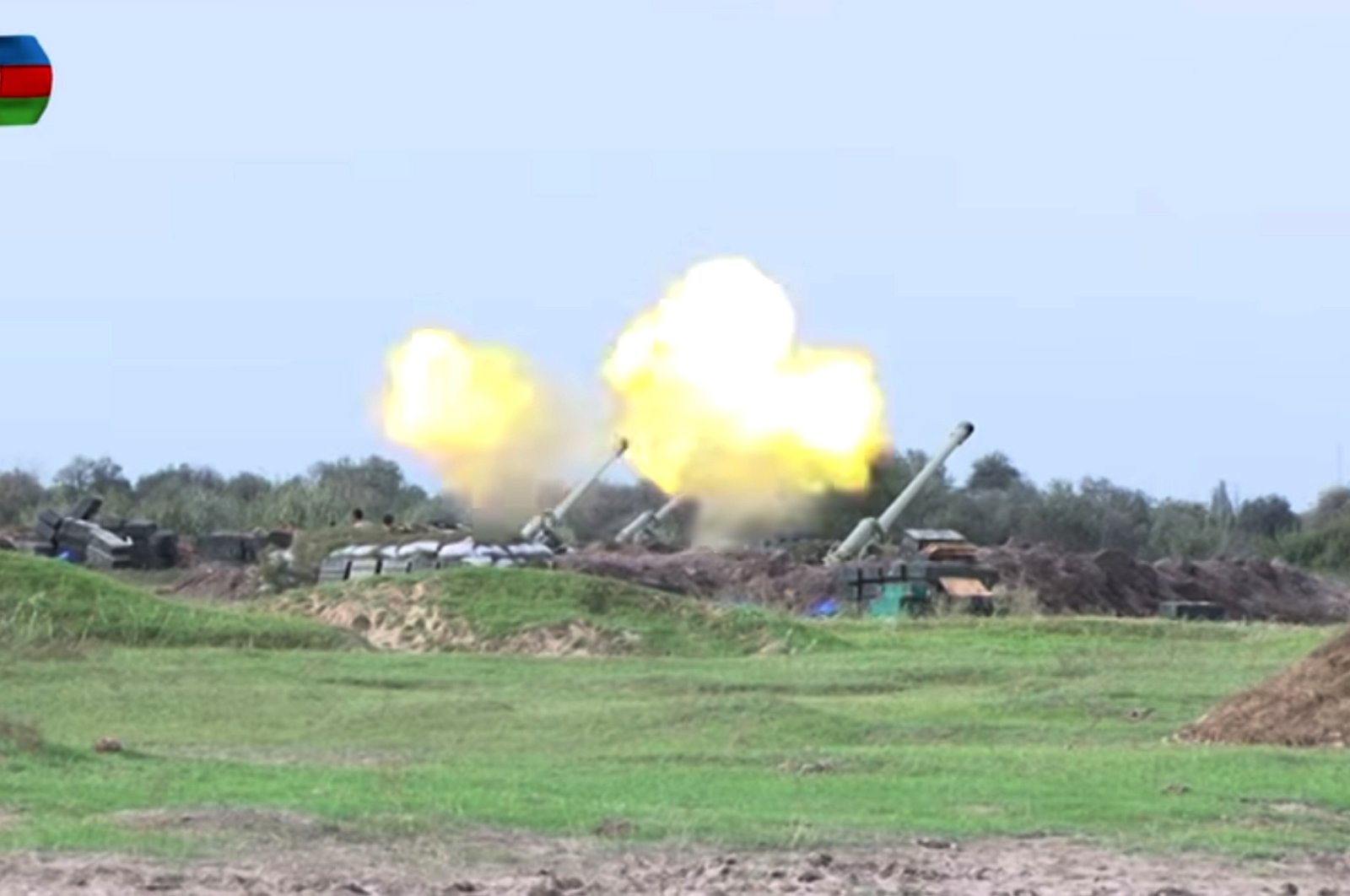 A still image taken from a video released on Sept. 29, 2020, by Azerbaijan's Ministry of Defense shows Azerbaijani artillery being fired at enemy positions deployed in the illegally occupied Nagorno-Karabakh region. (EPA / Azerbaijan Defense Ministry / Handout)
by Daily Sabah with Wires
Oct 04, 2020 9:42 am

Clashes between Armenia and Azerbaijan, the rightful owner of the illegally occupied Nagorno-Karabakh region, have intensified as separatists continue to report heavy losses

Azerbaijani authorities said early Sunday that they took "retaliatory measures" after rockets were fired by Armenian separatists from the Nagorno-Karabakh’s Stepanakert (Khankendi).

In Stepanakert, an Agence France-Presse (AFP) team on the ground reported several explosions.

Separatist Armenian militants and the Azerbaijani Armed Forces engaged in fierce clashes on the previous day as fighting over the illegally occupied Nagorno-Karabakh region intensified, with Armenia reporting heavy losses and its leader saying it was facing a "historic threat."

Yerevan's defense ministry claimed that separatist terrorists in Karabakh repelled a "massive attack" by Azerbaijan, seven days after fighting erupted again in the decades-old dispute over the region.

Armenia also announced the deaths of 51 more separatist fighters, raising the number of fatalities on both sides above 240.

Azerbaijan's defense ministry meanwhile said its armed forces had "captured new footholds" and President Ilham Aliyev announced that his forces took the village of Madagiz, a strategic hamlet within the firing range of an important northern road.

Aliyev said in a television interview the Armenians must withdraw from illegally occupied areas before the latest fighting can stop.

In the interview with Al-Jazeera, a transcript of which was distributed Saturday by the presidential press office, Aliyev criticized the so-called Minsk Group, which was set up in 1992 by the Organization for Security and Co-operation in Europe (OSCE). The group has failed to solve the Nagorno-Karabakh dispute for decades.

One reason behind the current fighting is that "the mediators do not insist or exert pressure to start implementing the resolutions of the United Nations Security Council,” he said.

"We have no time to wait another 30 years. The conflict must be resolved now," Aliyev added.

The Minsk Group, co-chaired by France, Russia and the U.S., was formed to find a peaceful solution to the conflict, but to no avail. A cease-fire, however, was agreed upon in 1994. Talks to resolve the conflict have largely stalled since the 1994 cease-fire agreement.

In an address to the nation on Saturday, Prime Minister Nikol Pashinian called on Armenians to unite.

"We are facing possibly the most decisive moment in our millennia-old history," Pashinian said.

The fighting over Nagorno-Karabakh has threatened to draw in powerful players like Turkey and Russia.

Armenia is in a military alliance of former Soviet countries led by Moscow, which maintains a military base there, while NATO member Turkey has reiterated its full support for Azerbaijan's military operations.

The new fighting erupted on Sept. 27 and international calls for a halt to hostilities have gone unanswered, with Armenia continuing its attacks on civilians and Azerbaijani forces, who are the rightful owners of the illegally occupied Nagorno-Karabakh region, as recognized by every United Nations member and the U.N. itself.

The separatist leader of Karabakh, Arayik Harutyunyan, said he was going to join "intensive fighting" on the frontline as Armenian losses intensified.

After suffering heavy losses in terms of militant deaths and destruction of military equipment, Armenia said Friday it was "ready to engage" with mediators but Azerbaijan, whose territory has been under illegal occupation for decades, has said that Armenian separatists must fully withdraw before a cease-fire can be brokered.

Armenia has set up a proxy administration in the Nagorno-Karabakh region that even it does not recognize as a sovereign nation: the so-called "Artsakh Republic."

Azerbaijan's Foreign Ministry released a statement Saturday that said thousands of ethnic Armenians from abroad were being deployed or recruited to fight for the so-called republic and Armenia.

Meanwhile, Azerbaijani soldiers hoisted their flag over the town of Madagiz, once occupied by Armenia, Aliyev announced.

"Today #Azerbaijan's Army hoisted our flag over Madagiz. #Madagiz is ours. #Karabakh is #Azerbaijan!" the president said on Twitter.

Aliyev added that he had reinstated the town's historical name, Sugovushan, as of Saturday.

Border clashes broke out last Sunday when Armenian forces targeted Azerbaijani civilian settlements and military positions, leading to casualties. Azerbaijan's parliament declared a state of war in some of its cities and regions following Armenia's border violations and attacks in the occupied Nagorno-Karabakh region.

Four U.N. Security Council and two U.N. General Assembly resolutions, as well as many international organizations, have demanded the withdrawal of the occupying forces.