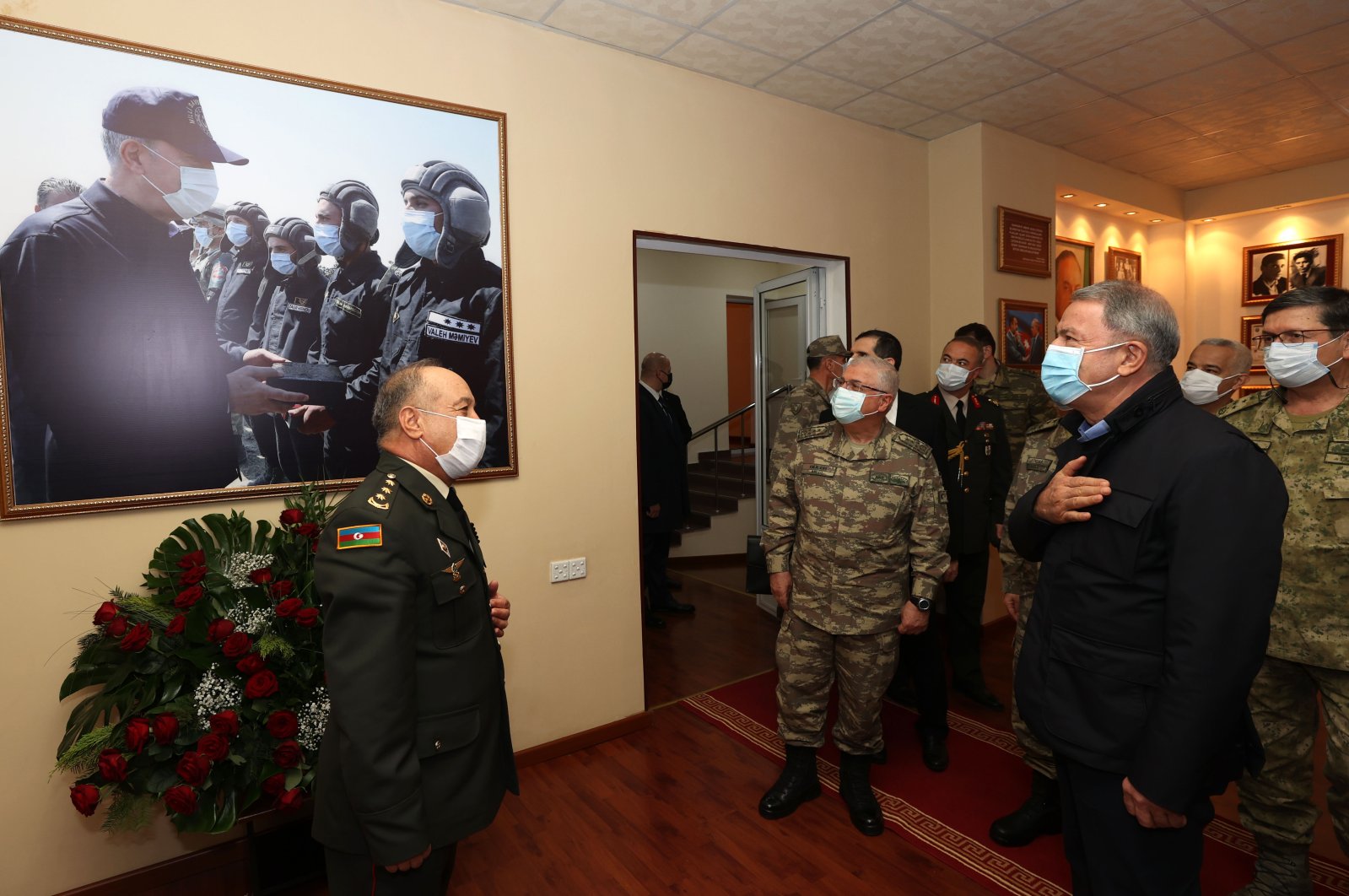 Turkish Defense Minister Hulusi Akar (R) looks at a picture of himself with Lt. Valeh Memiyev, who was killed during the recent Karabakh war, in the capital Baku, Azerbaijan, Jan. 3, 2021. (AA Photo)
by DAILY SABAH WITH AA Jan 04, 2021 11:27 am
RECOMMENDED

Azerbaijani defense officials have shared the story of a decorated army officer who was killed during the recent clashes liberating Nagorno-Karabakh from Armenia.

On Dec. 31, a Turkish military delegation led by Defense Minister Hulusi Akar and Chief of General Staff Gen. Yaşar Güler participated in the opening of an exhibition of photographs based on the theme "Turkish-Azerbaijani Brotherhood is Eternal."

Col. Abdullah Gurbani of the Azerbaijani Defense Ministry has shared the story of the fallen hero featured in the photo with Anadolu Agency (AA).

According to Gurbani, the photo was taken during an award ceremony following a joint Turkish-Azerbaijani military exercise on Aug. 13.

Addressing the Azerbaijani troops who participated in the exercise, the Turkish defense minister had commended their "strength and professionalism."

"Your main task remains the liberation of Azerbaijani territories, which have been under Armenian occupation for the last 30 years," he had said at the time.

"We are waiting for orders from our supreme commander (Azerbaijani President Ilham Aliyev). Once we receive the orders, we will liberate our territories and realize your wish," Lt. Memiyev had responded to Akar.

Gurbani said Memiyev and his comrades-in-arms kept their promise, liberating many settlements in the Qubadli region.

"Unfortunately, war and victory come with losses. During the clashes, Memiyev was critically wounded. In his last moments, he smiled and told his comrades that he kept his promise to Hulusi Akar," he said.

During the recent visit, Turkey's defense minister said that Turkish and Russian troops would work together to defend the rights of the Azerbaijani nation.

"Our activities will intensify after the joint center starts operating, and we will carry out our duty of defending the rights of Azerbaijani brothers," Akar told a military ceremony in the Azerbaijani capital Baku late Wednesday.

During the 44-day conflict, Azerbaijan liberated several cities and nearly 300 settlements and villages, while at least 2,802 of its soldiers were killed. There are differing claims about the number of casualties on the Armenian side, which, sources and officials say, could be up to 5,000.

The two countries signed a Russian-brokered agreement on Nov. 10 to end fighting and work toward a comprehensive resolution.

The construction of the Turkish-Russian joint monitoring center will be completed in two weeks, Aliyev said Thursday.

"The sooner the Monitoring Center starts operating, the better, because even though about two months have passed since the war ended, there are still threats and dangers," Aliyev said during the meeting with Akar and commanders of the Turkish Armed Forces (TSK).

The cease-fire is seen as a victory for Azerbaijan and a defeat for Armenia, whose armed forces have withdrawn in line with the agreement. Violations, however, have been reported in the past few weeks, with some Armenian soldiers said to have been hiding in the mountainous enclave.