Azerbaijan to celebrate Victory Day on Nov. 8 in memory of Shusha's liberation 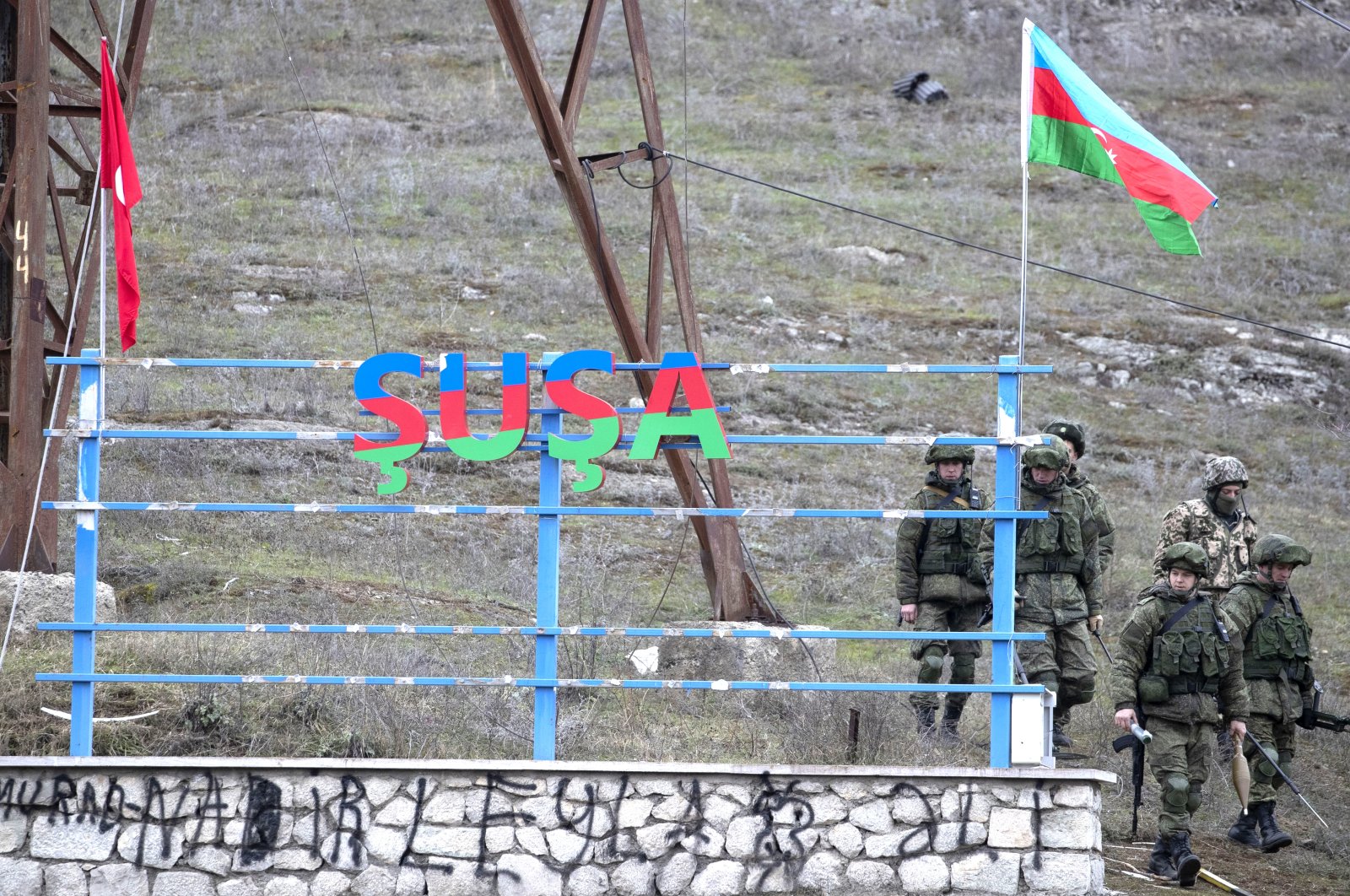 Russian peacekeepers and Azerbaijani servicepeople patrol the area at the entrance to the town of Shusha, Azerbaijan, Nov. 26, 2020. (Photo by Getty Images)
by DAILY SABAH WITH AGENCIES Dec 04, 2020 11:17 am
RECOMMENDED

Azerbaijani President Ilham Aliyev on Thursday announced that the country will celebrate Victory Day every year on Nov. 8.

Aliyev on Wednesday had declared Nov. 10, the day when Armenia accepted defeat and ended six weeks of fighting in the Nagorno-Karabakh region, as Victory Day.

However, taking into account that Turkey’s founder Mustafa Kemal Atatürk's death anniversary is commemorated in Turkey on Nov. 10, Aliyev decided to change the date of Victory Day to Nov. 8, when Shusha, known as the pearl of Nagorno-Karabakh, was liberated after nearly three decades of Armenian occupation.

Atatürk's words that "the joy of Azerbaijan is our joy, its sorrow is our sorrow" have been engraved upon the history of the Turkic world.

The liberation of Shusha was a triumph of the Azerbaijani determination and played a decisive role in the fate of the second Nagorno-Karabakh war, also recognized as the Patriotic War by Azerbaijan, and led to the recognition of defeat by Armenian Prime Minister Nikol Pashinian as well as the cessation of the hostilities between Baku and Yerevan.

Aliyev has also signed an order on the commemoration of martyrs of the Patriotic War.

Based on the Presidential Order, on Dec. 4 at midday, a minute of silence will be observed across the country to pay tribute to martyrs of the Patriotic War who sacrificed their lives for the territorial integrity of the country.

On Wednesday, Aliyev also designated Sept. 27, when Baku began the operation to liberate its lands from occupation, as a "Memorial Day" for the martyrs.

The Turkic Council conveyed condolences Thursday to Azerbaijan for those who lost their lives in the clashes with Armenia.

"#TurkicCouncil wished God's mercy on 2,873 martyrs who gave their lives for their homeland during the just struggle for their territorial integrity of our Member State, brotherly #Azerbaijan," it said on Twitter.

The Council wished a quick recovery to veterans and conveyed condolences to Azerbaijan and the entire Turkic world.

Azerbaijan announced Thursday that nearly 2,800 of its soldiers were killed in the recent fighting over Nagorno-Karabakh, the first details it has released of military losses in weeks of clashes with Armenian forces.

The defense ministry in Baku said in a statement that "2,783 servicemen of the Azerbaijani armed forces were killed in the patriotic war," adding that the identity of 103 troops is yet to be established through DNA analysis. Another 100 Azerbaijani soldiers are missing, the statement said.

Azerbaijani soldiers "showed courage and heroism in the Great Patriotic War and inflicted crushing blows on the Armenian armed forces," it said.

Yerevan had earlier announced that 2,317 Armenian troops died during the conflict, which also claimed the lives of at least 93 Azerbaijani and 50 Armenian civilians.

Fresh clashes erupted between Armenia and Azerbaijan in late September, rekindling the Caucasus neighbors' decadeslong conflict over the region.

During the conflict, Azerbaijan liberated several towns and nearly 300 settlements and villages from the Armenian occupation.

Fierce fighting persisted for six weeks despite efforts by France, Russia and the U.S. to broker cease-fires, before Armenia and Azerbaijan signed a Moscow-brokered peace deal on Nov. 9.

The agreement was signed after Baku's army overwhelmed the separatist forces and threatened to advance on Karabakh's main city Stepanakert.

The deal has sparked celebrations in Azerbaijan and fury in Armenia, where Pashinian is facing mounting criticism for agreeing to the deal.