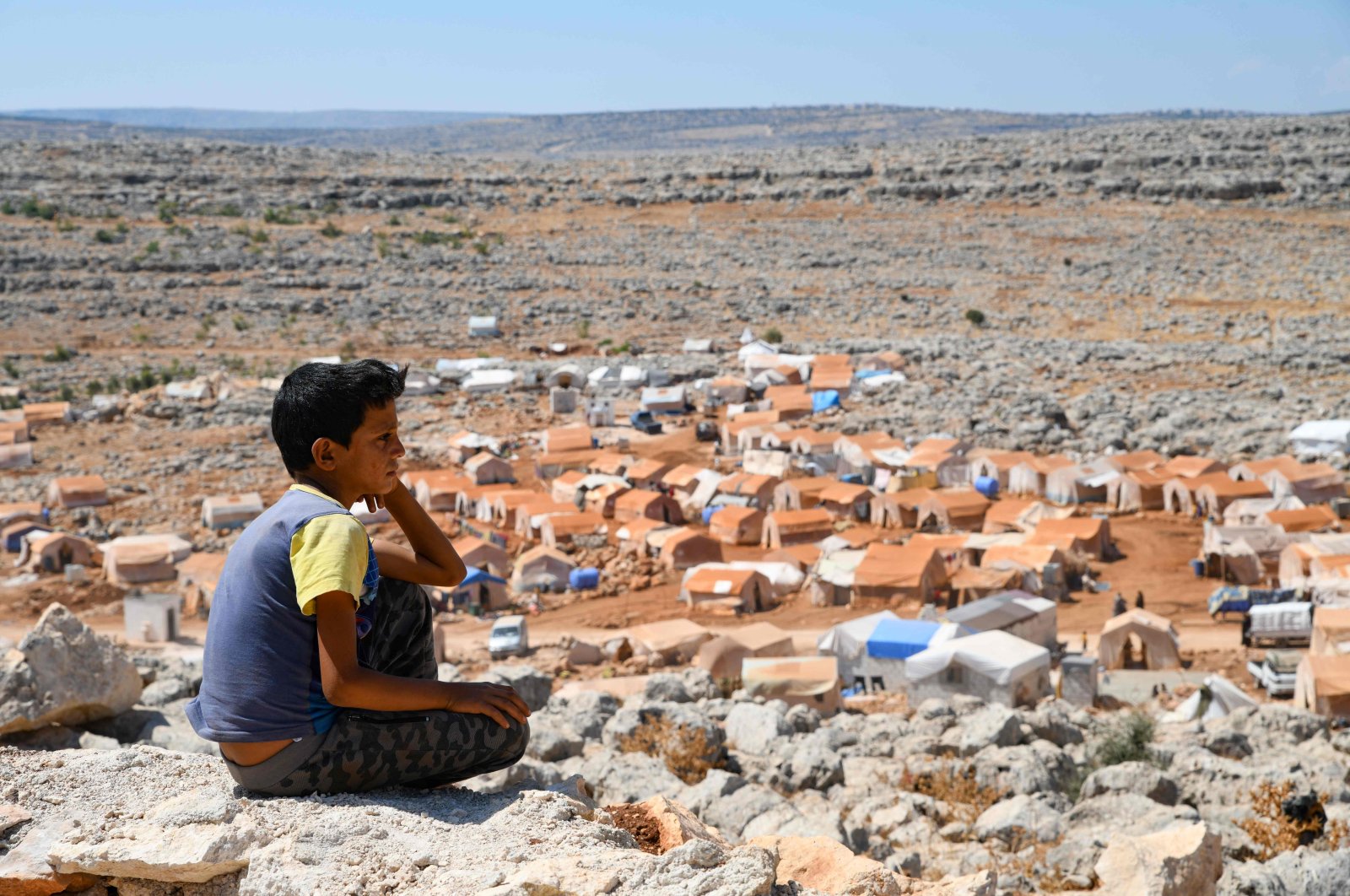 A young Syrian boy who was displaced from the town of Khan Sheikhoun gazes from a small hilltop at the makeshift camp where he currently lives, in the northern countryside of Idlib province near the Turkish border, Sept. 8, 2019. (AFP Photo)
by DAILY SABAH WITH AA Jun 04, 2020 12:41 pm
Edited By Dilara Aslan
RECOMMENDED

The civil war that has ravaged Syria for almost 10 years has taken a heavy toll on Syrian children. In any armed conflict, it is the most vulnerable members of society, namely children, who are most affected by the consequences of war.

This year, on the International Day of Innocent Children Victims of Aggression, figures once again reveal the devastating impact of war on the young.

Millions of children have been displaced and more than 29,000 others killed since the Syrian civil war erupted in 2011, according to a joint report by the Syrian Network for Human Rights (SNHR) and Anadolu Agency (AA).

The United Nations observes the International Day of Innocent Children Victims of Aggression on June 4 every year to remind of the commitment to the rights of children. The annual observance has brought to attention the price children pay for the civil war in Syria. The six most common violations include the recruitment of child soldiers, killing, sexual violence, abduction, attacks on schools and hospitals, and denial of humanitarian aid.

Their lives forever marked by conflict, a total of 6.7 million Syrians, including 2.5 million children, have had to leave their country since the war erupted, according to U.N. data.

Since March 2011, at least 29,296 children have been killed in Syria by the parties to the conflict, while many others were injured or disabled, according to the joint report by SNHR and AA.

The Syrian regime has been behind the majority of the fatalities, killing 22,853 children, while Russian forces have killed 2,005 children, according to the report.

Furthermore, 223 children have been killed in the attacks carried out by the YPG/PKK terrorist group, with 956 killed by Daesh terrorists and 924 killed by the Global Coalition against Daesh, the report revealed. The report also documented the killing of 1,282 children by other unidentified parties.

A total of 217 chemical attacks carried out by the Assad regime since March 2011, left 205 children dead, according to the report.

Furthermore, more than 170 children have been tortured to death by the regime, while warring factions continue to hold at least 4,816 children in prisons, it added.

Syria has been at war since early 2011 when the Assad regime cracked down on pro-democracy protesters. Hundreds of thousands of people have been killed and more than 10 million displaced, according to U.N. estimates.

With help from Russia, the Assad regime has inflicted severe pain upon Syria's people, bombing civilian settlements and damaging vital facilities such as hospitals and schools. According to the U.N., almost 50% of medical facilities in Syria are out of service.

As a result, many children are deprived of education while the existing institutions struggle with the pandemic, another factor that hinders children from attending school. Since children in the region do not have the luxury or the technical infrastructure to take courses remotely, most of them are deprived of their education.

The children born when the war started are now 9 years old. A lost generation will emerge if the international community does not find a solution to the Syrian crisis and further ignores the sufferings of the country's people.

Millions fleeing attacks by Assad's forces went north in search of a safe haven. They must resort to living in tents or decrepit buildings, and most are dependent on aid for survival. Constant displacement in the country leads to irregularities in the lives of children, particularly affecting their access to education, in addition to the psychological damage it causes in their lives.

Some schools have been renovated by Turkey in provinces liberated from terrorist groups near the border, enabling the children there to continue their education. In December, a school in the northern Syrian town of Tal Abyad reopened after renovations were completed. The repairs were carried out by the Defense Ministry and the governorate of Şanlıurfa in southeastern Turkey. Previously suffering severe damage from YPG/PKK terrorists, the school now has six classrooms and 115 students.

Hundreds of thousands of families remain displaced in Syria, especially in its northwest. Although international aid agencies, the U.N. and Turkey continue to provide humanitarian assistance, that support is not enough to relieve the tragedy, especially now that they face a threat that does not distinguish between the opposition and the regime: COVID-19.

While the most urgent needs of the civil war refugees continue to be shelter, water, sanitation, hygiene, food and protection, other gaps such as health care, education and nutrition are becoming more apparent.