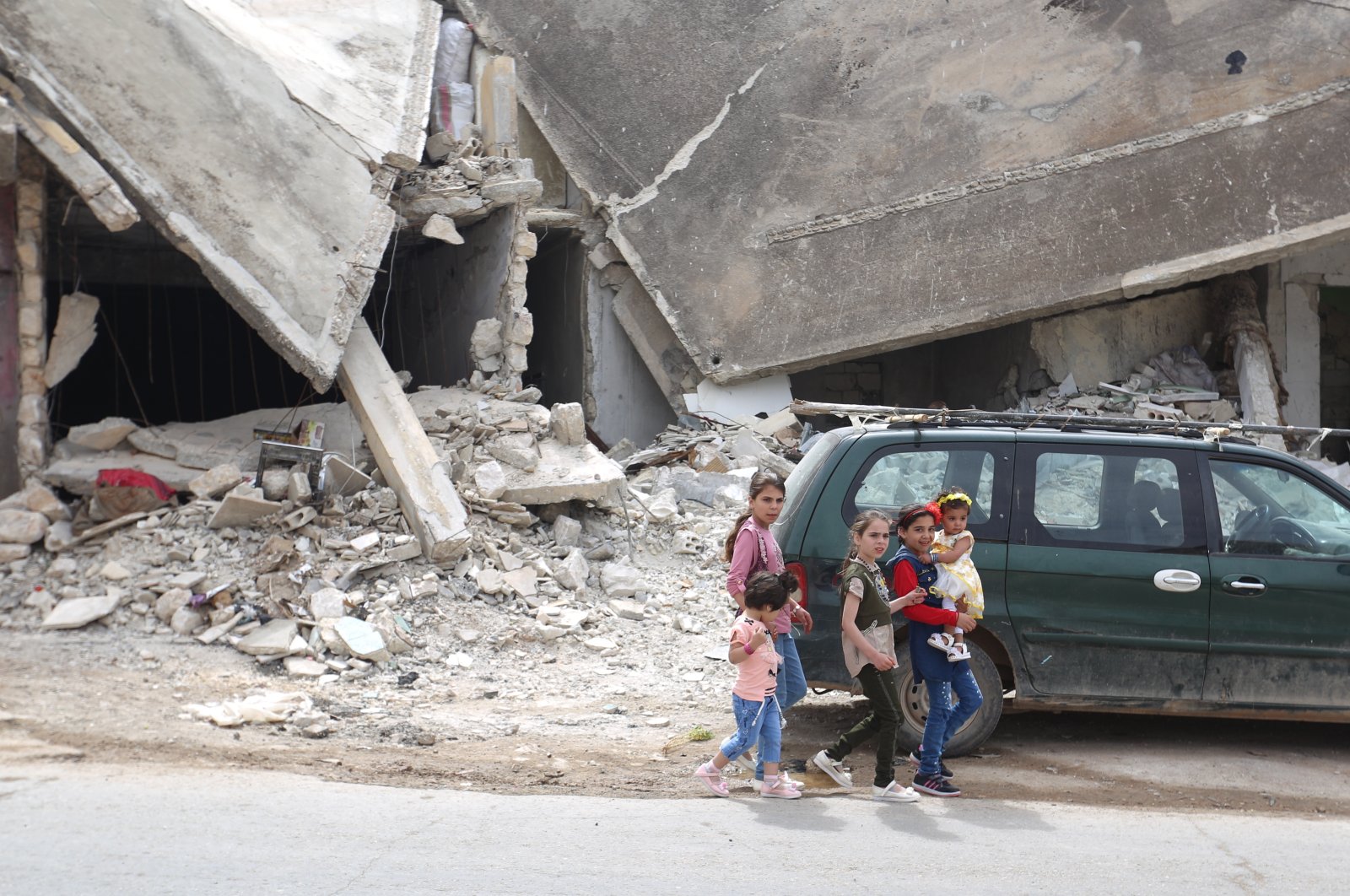 Civilians in the Ariha district now live in a relatively secure environment since the cease-fire in northwestern Idlib, Syria, May 25, 2020 (AA Photo)
by DAILY SABAH Jun 01, 2020 11:04 am
Edited By Dilara Aslan

At least 285,000 people have returned to Syria’s Idlib after major displacement due to Russian supported regime violence, yet the civilian situation remains fragile with new challenges from COVID-19, and attacks by armed groups

Despite the recent calm provided by the March 5 cease-fire in Syria’s northwest, continuing attacks by armed groups on civilians and COVID-19 – which has exacerbated preexisting humanitarian needs, the situation remains alarming for the region's residents, the United Nations Office for the Coordination of Humanitarian Affairs (OCHA) said.

The Ministry of Health has to date reported 122 laboratory-confirmed cases. According to the latest U.N. report published on Saturday, there has been one case in Daraa, 87 in Damascus and 34 in rural Damascus.

“Years of conflict resulting in economic hardship, multiple displacements and exposure to violence have eroded the ability of people to cope, while the effects of the COVID-19 pandemic entrench existing needs and proliferate new ones across the population of northwest Syria,” the OCHA said.

The U.N. further stressed that armed clashes affecting civilians have been reported recently in Idlib and the nearby Aleppo provinces.

On May 28, an incident involving members of a non-state armed group reportedly resulted in the death of at least two people, including one child, and injuries to five other civilians including another child. The OCHA also said that on May 23 and May 24, clashes involving armed groups in the vicinity of Salama in northern Aleppo and in Idlib’s Ariha reportedly resulted in the death of four people, including a child and a woman, and injured two civilians, including one child.

The OCHA further stated that increased incidents of improvised explosive devices (IED) in the past three months fuel similar risks for civilians and humanitarian activities. Since May 15, local sources reported at least 10 IED incidents in Idlib and Aleppo, resulting in injuries to civilians and material damage. During the same time period, five other incidents where IEDs were identified and defused were reported.

Turkey and Russia agreed to a cease-fire in March to halt the further escalation of violence in Syria’s northwest following the Bashar Assad regime’s assault on the last opposition bastion Idlib. The incident displaced an unprecedented number of civilians while costing the lives of many. Since the cease-fire relative calm has prevailed in the region, yet the damage caused to civilian and health infrastructure as well as the displacement of hundreds of thousands left many vulnerable to the threat of COVID-19.

Syria's damaged health infrastructure and the massive displacement of its citizens as a result of attacks by the Assad regime and Russia make potential containment measures a nearly impossible task. The constant onslaught has caused the deterioration of the physical health of people across the country, where malnutrition and poverty are widespread. According to the U.N., nearly 50% of medical facilities in the country were out of service.

The risk of an outbreak is especially high and most alarming in Syria's northwest, where overcrowded settlements are teeming with fresh arrivals, many of the displaced are forced to sleep in freezing temperatures in open spaces.

Moreover, the overcrowded camps, unfit for living during the global pandemic, are often plagued by poor hygienic conditions and fires that erupt frequently, spreading easily to the other tents nearby. Since May 15, several fire incidents in internally displaced people (IDP) sites were reported, causing the destruction of tents and belongings of IDP families. Most recently, a fire broke out on May 16 in al-Sadaqah IDPs Camp, one of a group of camps in the Deir Hassan area in the northern suburbs of Idlib, severely damaging at least 20 tents in the camp. The fire was caused by an electrical short circuit. At least two civilians were killed in seven fires in the last month in the tent camps near the border.

Furthermore, in May, two children were reportedly killed as windstorms hit camps in Idlib, collapsing walls or tent structures.

At least 285,000 civilians have returned to Idlib since the cease-fire, while the movement of the displaced continues, Mohammed Hallaj, head of the Response Coordination Group in the province told Anadolu Agency (AA).

Hallaj pointed out that those who have returned are still heavily dependent on aid provided by humanitarian groups. Despite the conditions, however, civilians prefer to take advantage of the secure environment provided by the cease-fire than to stay in overcrowded, makeshift camps. He added that because of the continuity of the cease-fire, the number of people returning to their homes would grow.