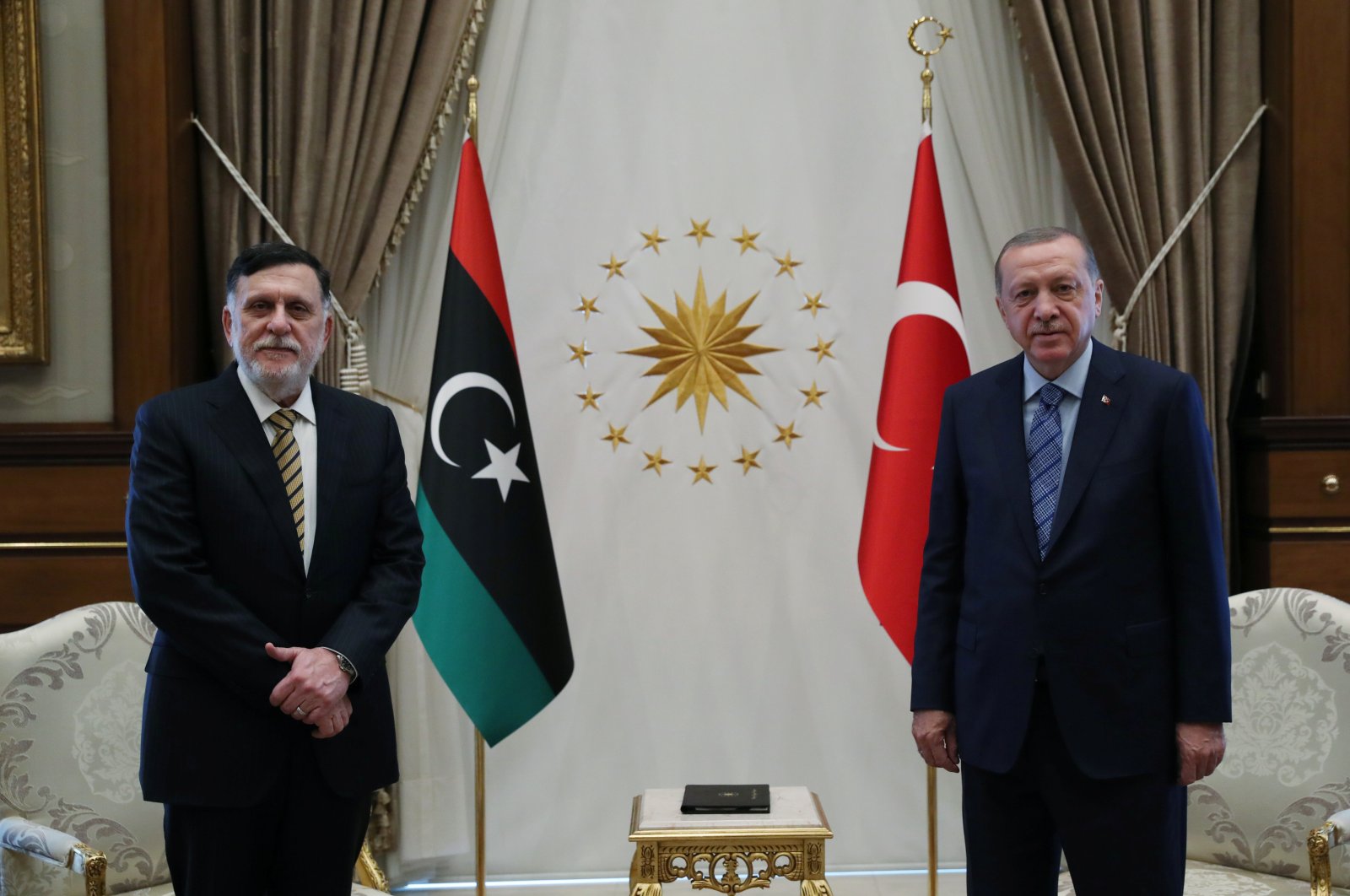 Speaking in a joint press conference following his meeting with Libya's internationally recognized leader Fayez al-Sarraj in the Turkish capital Ankara ahead of a new round of talks on a potential cease-fire, Erdoğan reiterated his call on the international community to take steps against Haftar’s brutalities in Libya.

“History will judge those who cause bloodshed and tears in Libya by supporting putschist Haftar,” Erdoğan said.

Touching upon the cooperation between the two countries, Erdoğan also said that Turkey has become the country that has supported Libya the most during the coronavirus pandemic, especially thanks to its multiple medical aid deliveries to the country.

“Turkey and Libya agreed on improving bilateral ties in multiple areas, including in the Eastern Mediterranean,” he added.

Speaking after Erdoğan, Sarraj thanked Turkey for standing with the Libyan people during this difficult process.

“We have taken all the areas near Tripoli under control as of today, this is a success for all of us. People’s will is what matters to us. I call on Haftar militias to leave the Libyan people alone. You (Haftar) have been defeated in Tripoli; just accept it. History will not forgive what you have done to Libya,” he added.

Sarraj added that he will not allow negotiations with Haftar in the next stages.

Turkey began providing military support to Sarraj’s Government of National Accord (GNA) in November after signing a military cooperation pact alongside a maritime demarcation deal, which gives Ankara exploration rights in the Mediterranean that Greece and others reject.

In recent months, Turkish support in the conflict has pushed back putschist Haftar's eastern-based forces – backed by the United Arab Emirates, Russia and Egypt – which had been attacking the GNA in Tripoli since April 2019.

The meeting comes a day after the GNA recaptured Tripoli's main airport ahead of what appeared to move toward talks on a truce, after months of gains to oust Haftar forces from much of their foothold in the northwest. The GNA also said Thursday it had regained full control of Tripoli.

Erdoğan underlined a solution in Libya can only be reached under the guardianship of the U.N. and with the lead of Libyans.

On Monday, the U.N. said both sides had agreed to resume cease-fire talks, warning that weapons and fighters flying into Libya in defiance of an arms embargo threatened a major new escalation.
A senior Turkish official said the airport seizure was critical ahead of potential peace talks, and that Turkey would reject any proposal to divide Libya between warring factions.

"Everyone wants to sit at the table without losing territory, but the territory you hold strengthens your positions at the table," the official said, adding Erdoğan and Sarraj would discuss both strategy and the situation on the ground.

Sarraj's visit to Ankara comes after a flurry of diplomacy Wednesday as leaders from both sides traveled abroad for meetings hosted by the foreign powers embroiled in the conflict. Sarraj's deputy and foreign minister traveled to Moscow, while Haftar was in Egypt to meet with defense officials.

Ankara, which has sent equipment and military personnel to the help the GNA, has slammed Haftar's supporters for backing a "putschist" and says Sarraj's recent advantage is an opportunity for political talks.

Ahead of the meeting between Erdoğan and Sarraj, the U.N. announced that military talks on a cease-fire in Libya resumed Wednesday, welcoming it as a "positive" first step.

A meeting with the U.N.-recognized GNA will be held within the coming days, he added.

"Negotiations will continue on the cease-fire agreement and associated arrangements on the basis of the draft presented by the U.N. mission to both delegations on Feb. 23 this year," Dujarric said.

"The U.N. mission encourages the parties to de-escalate, consider a truce to enable improved delivery of humanitarian assistance and to refrain from incitement and create an environment conducive for negotiations and building trust between the parties."

The U.N. mission in Libya had announced on Tuesday that the rival factions had agreed to resume talks after a suspension of more than three months.

All previous attempts at a cease-fire, most recently in January on the occasion of a conference in Berlin, had failed.

In February, when talks were suspended, the rival camps had agreed to negotiate a "permanent cease-fire" under a joint GNA/pro-Haftar military commission.

The U.S. also stated Wednesday that it was waiting to build an "empowered" U.N. mission for Libya, frustrating France and Germany which say the delay in approving an envoy is jeopardizing momentum to end the conflict.

The position of the U.N. envoy for Libya has been vacant for three months, even with calls intensifying for a return to negotiations.

Hanna Serwaa Tetteh, Ghana's former foreign minister, was proposed for the role weeks ago by U.N. Secretary-General Antonio Guterres but has not been confirmed, with diplomats pointing to U.S. opposition.

"It's really urgent now. The situation in Libya is really bad," said the French ambassador to the U.N., Nicolas de Riviere, as he went public with concerns Monday alongside his counterpart from Germany.

Christoph Heusgen, the German ambassador, said there needed to be a political rather than military solution.

"By withholding the agreement to a proposal by the secretary-general with regard to the special envoy, those responsible ... carry a very heavy responsibility," he said.

Neither envoy explicitly named the U.S.

A U.S. official, speaking on condition of anonymity, said the U.S. also sought Libyan negotiations soon but added: "We want an empowered U.N. mission that can accomplish this goal."

"This will require speedy action to appoint a U.N. special envoy who has the senior diplomatic clout and personal standing to make that engagement meaningful," the State Department official said.

The official said the envoy should "focus exclusively on negotiation" while a special representative of the secretary-general would focus on running the U.N. mission in Libya.

Ghassan Salame of Lebanon quit as the envoy on March 2 citing health reasons.

Guterres first proposed as his successor Ramtane Lamamra, a former Algerian foreign minister, but that choice was vetoed by the U.S., leading the U.N. chief to name Tetteh, who since 2018 has served as the U.N. representative to the African Union.