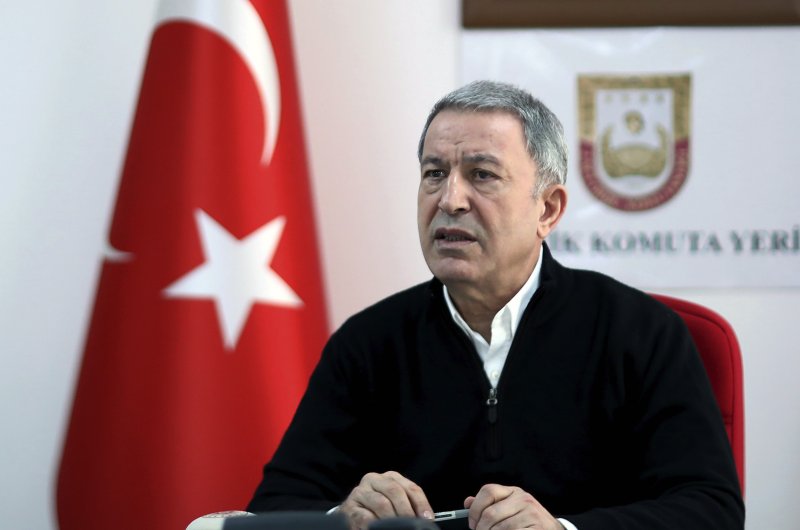 On the details of the operation, Akar said the operation has been continuing successfully as planned and that the country had destroyed two jets, two drones, eight helicopters, 135 tanks and five air-defense systems belonging to the Syrian regime.

Akar, along with Chief of General Staff Gen. Yaşar Güler, Land Forces Commander Gen. Ümit Dündar and Air Forces Commander Gen. Hasan Küçükakyüz, was present at the tactical command center in the southern Hatay province, bordering Syria, where he pointed out that as a guarantor country, Turkey would fulfill all responsibilities arising from its international commitments.

"Our expectation from Russia at this point is to fulfill its commitments as a guarantor state, and in this context, to use its influence over the regime to make it halt its attacks and withdraw to the lines set under the Sochi agreement," the minister underlined.

Akar said talks between Ankara and Moscow were underway, adding that Turkey did not aim for a face-off with Russia and that its only aim was to stop regime massacres and prevent radicalization and migration.

Turkey on Sunday launched Operation Spring Shield after at least 34 Turkish soldiers were killed and dozens injured in an Assad regime airstrike in Idlib, a de-escalation zone in northwestern Syria, just across Turkey's southern border. Turkey's only target during the operation were Assad regime troops and equipment in Idlib under the nation's right to self-defense, stressed Akar.

But more than 1,300 civilians have since been killed in attacks by Assad regime and Russian forces in the zone, as the cease-fire continues to be violated, sending about a million refugees toward Turkey's border with Syria.