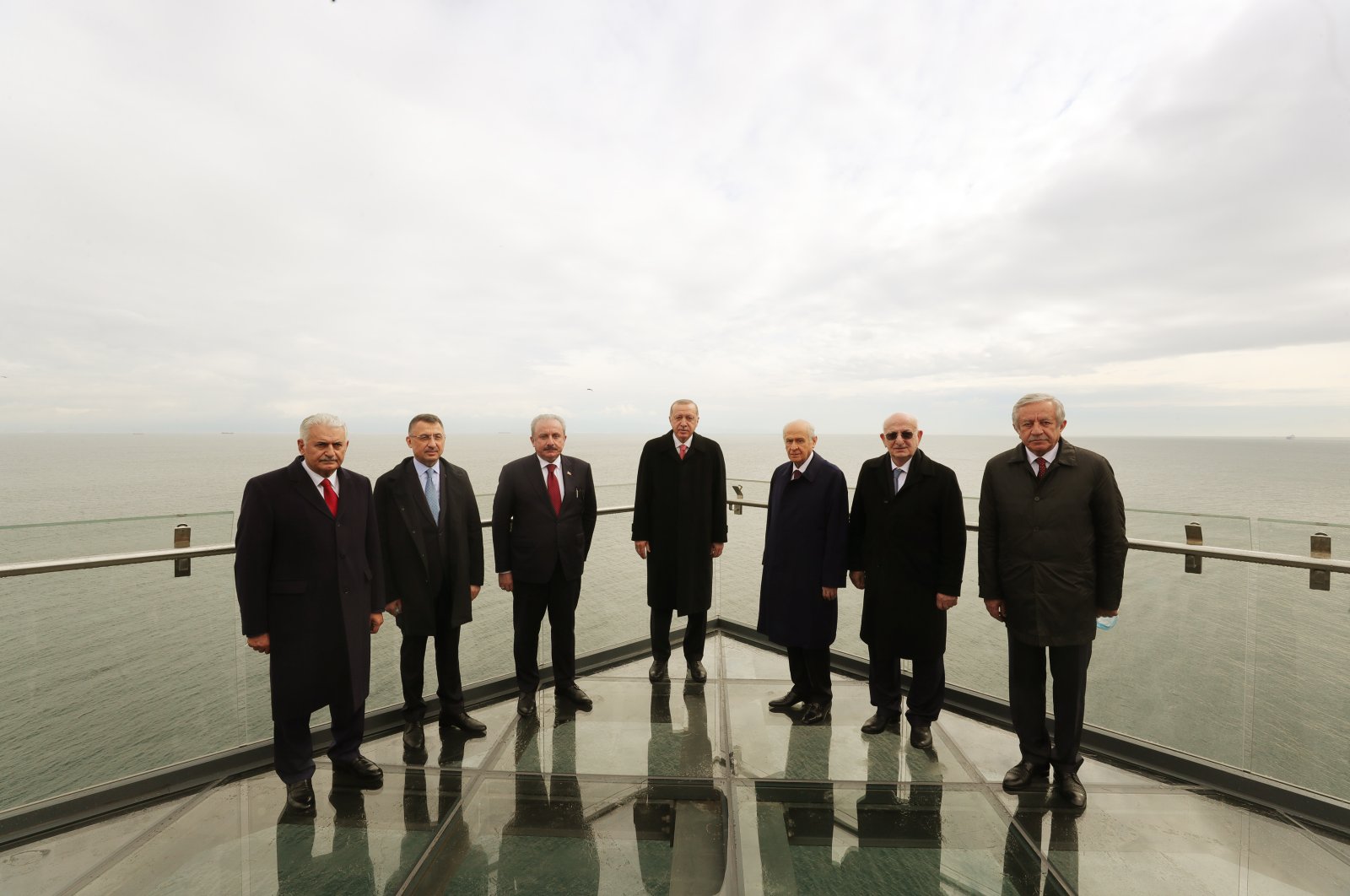 President Recep Tayyip Erdoğan inaugurated the Democracy and Freedom Island in the waters near Istanbul on Wednesday, on the 60th anniversary of a coup in Turkey.

Erdoğan was accompanied by the head of the Nationalist Movement Party (MHP) Devlet Bahçeli and many other ministers.

“1960 coup was not only coup but also a murder of law,” Erdoğan said during his speech at the ceremony.

Highlighting that the memories of the main victim of the 1960 coup Adnan Menderes and his friends will never be wiped out, Erdoğan emphasized that the ones who caused their killing will remain as a black mark on Turkey’s political history.

Yassıada, one of the Princes' Islands located in the Sea of Marmara southeast of Istanbul, symbolizes one of the darkest eras in the history of the Republic, as it is notorious for the jails and trials from the 1960 military coup.

The island, which saw the culmination of the 1960 coup, has been renamed Democracy and Freedom Island following a recent transformation and construction of new facilities.

“The one that was killed that day was actually the will of people,” President further expressed.

"We are having a meaningful stance toward our history by sitting here, in this island today," he said.

Reminding the history of the republic, from its foundation and one-party years to democracy attempts that gained momentum with Menderes's Democrat Party to today, Erdoğan called on the youth to search and learn their country's past.

Erdoğan also heralded Turkey's most recent initiatives, announcing that Turkey’s Fatih Drill Ship will sail to the Black Sea to carry out more drilling activities on May 29.

Five years of work on the island have transformed the place to the home of a massive complex that includes a 125-room hotel, a 600-seat conference hall, a mosque, a museum and exhibition halls, as well as cafes and restaurants. Workers are currently putting the final touches on the 18.3-hectare island.

All the new facilities on the island have been named in accordance with the island's history.

The island was run by the Naval Forces until 1993 before it was transferred to Istanbul University's Fisheries Department. The university abandoned ownership two years later, and the few surviving buildings on the island fell into disrepair. The current government pledged to revamp it as a place to remember the coup, the first in the history of the republic, and host events on democracy and freedom.

During his speech at the ceremony, Bahçeli expressed his gratitude for Erdoğan for his works on the island while underlining that transformative process that the country has gone through since the coup of 1960.

Bahçeli emphasized the importance of the democratic process and marked the elections as the center of an ideal democracy, calling for everyone to respect the will of the people.

“Coups are not only a wrong decision but also brutality,” Bahçeli said.

Following Bahçeli, Parliamentary Speaker Mustafa Şentop came to the scene, saying that on May 27, 1960, an assassination attempt was made on Turkey's democracy.

He also commemorated the victims of the 1960's coup.

Following Şentop's speech, a clip describing Turkey's first coup and the island's transformation has been screened.

"Yassıada, which is home to one of the darkest periods in the history of democracy, is reborn as the Island of Democracy and Freedom," Turkey's Communications Directorate said Tuesday in a public service advertisement.

Menderes was the founder of the Democrat Party (DP) in 1945, which broke from the Republican People's Party (CHP) that had been governing the country in a single-party system since the founding of the republic and led it in the first multiparty elections in 1946. In the 1950 elections, the DP won a parliamentary majority and ran the country until the May 27, 1960, military coup. Menderes is seen as the first democratically elected prime minister of Turkey.

His term saw significant changes to counter the strict secularist policies of the preceding CHP era that alienated significant portions of the nation, coupled with economic reforms and major diplomatic realigning, including membership to NATO. The DP is seen by many as the predecessor of the liberal-conservative political movements of the Justice Party (AP) of the 1960s and 1970s, the Motherland Party (ANAP) of the 1980s and the ruling Justice and Development Party (AK Party).

In the late 1960s, Turkey was experiencing hard times economically that brought unrest throughout the country. On March 12, 1971, a military memorandum was issued to "restore order," but it is widely referred to as the military's second intervention in the Republican era eleven years after the 1960 coup.

Considered as a disgrace to the history of Turkish democracy, the Sept. 12 coup marked the third time the Turkish Armed Forces (TSK) took hold of the democratically elected government and declared a state of emergency where thousands of people were unlawfully detained and even tortured to death, the constitution was suspended and political parties were closed while their leaders were questioned, prosecuted and imprisoned.

According to reports, 171 people died as a result of torture during interrogation while 30,000 people were dismissed from their duties, such as newspapers not publishing for 300 days. Additionally, over a million people were blacklisted and 98,404 people were tried on charges of being members of a leftist, a rightist, a nationalist, a conservative and a similar ideological organization.

Turkey also experienced a post-modern coup 23 years ago that caused great suffering for the country's conservative fraction. On Feb. 28, 1997, the military-dominated National Security Council threatened action over secular concerns if Prime Minister Necmettin Erbakan did not back down. He resigned four months later, whereas his party Welfare Party (RP) and its successor, the Virtue Party, was banned by the Constitutional Court in January 1998 and June 2001. Many public servants, officers and civilians were victimized when they were sacked from their jobs and sent to prison. Women who wore headscarves were denied education after the upper echelons in the TSK forced the elected government to resign under the guise of protecting Kemalism and secularism.

Turkey was on a steady political path with no shaky coalition governments for more than a decade when some soldiers, this time those aligned with a terrorist group, tried to seize power in 2016. A total of 251 people were killed and many more were injured when soldiers associated with the Gülenist Terror Group (FETÖ) attempted to overthrow the government and killed civilians opposing them four years ago.