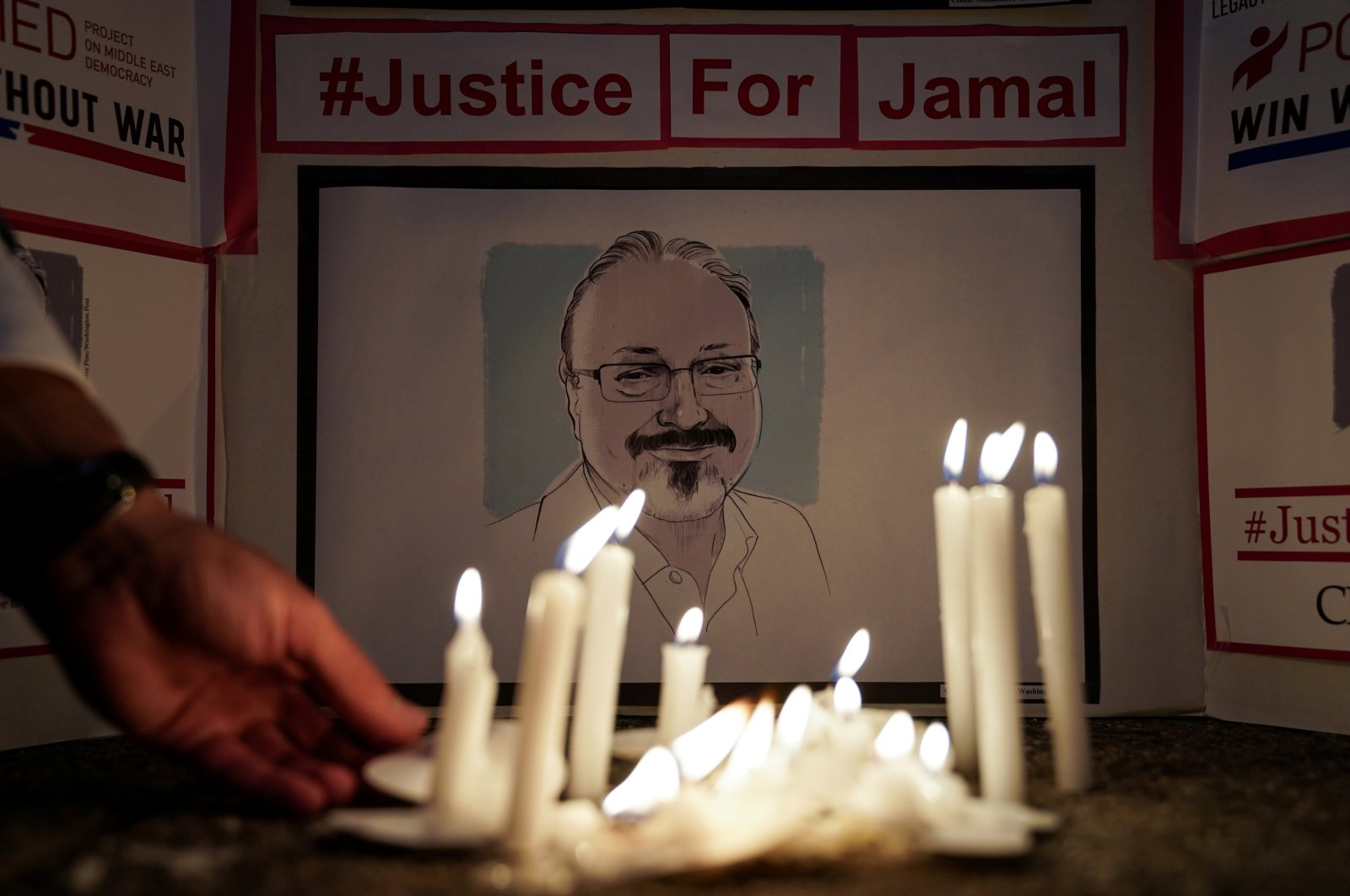 The Committee to Protect Journalists and other press freedom activists hold a candlelight vigil to mark the anniversary of the killing of journalist Jamal Khashoggi at the kingdom's consulate in Istanbul in front of the Saudi Embassy in Washington, D.C., Oct. 2, 2019. (REUTERS)
by DAILY SABAH WITH AA
Oct 01, 2020 2:14 pm

Jamal Khashoggi, a Saudi dissident and columnist with The Washington Post was last seen on Oct. 2, 2018, when he went to Saudi Arabia's consulate in Istanbul with his fiance. Vanishing after this seemingly innocent visit, the journalist is believed to have been killed by a Saudi hit squat done at the behest of the kingdom's authorities. Despite many details of his murder coming to light, however, the whereabouts of Khashoggi's body remains a mystery while Saudi Arabia continues to avoid accountability over the hideous incident.

Khashoggi's murder caused an international crisis that turned many eyes toward Saudi Arabia, especially to the country's Crown Prince Mohammed bin Salman (MBS). Turkey has shouldered most of the responsibility of bringing justice to the perpetrators, given that the international community and the kingdom have failed to conduct a proper, objective trial on the case.

Turkish prosecutors on Monday prepared a second indictment against six Saudi officials in connection with the murder.

It was also reported that the charges against the other four carried sentences of up to five years in jail. The reports did not specify whether the six suspects were among those already being tried in absentia in an Istanbul court for Khashoggi's killing.
Yasin Aktay, a close friend of Khashoggi and a deputy chairperson of Turkey’s ruling Justice and Development Party (AK Party), praised Turkey’s efforts in the case on Thursday, while bashing Saudi Arabia for its lack of accountability.
Underlining that a fair trial can only take place in Turkey, Aktay stated that the kingdom has never shown interest in the ongoing investigation and trial in the country.
“The Turkish justice system is a reliable justice system. It is a transparent justice system with transparent lawyers,” he said, adding that there are even lawyers in trials offering council to the Saudi suspects, which proves the trial’s objectivity regarding the case.
Pointing out that the incident took place on Turkish soil, Aktay expressed that this murder interests Turkey since the country sees it as a crime that was committed against itself.

The first public trial in Khashoggi's murder against 20 Saudi nationals opened in Istanbul in July.

Saudi Arabia, however, refused to extradite the suspects, including Ahmed al-Asiri, ex-deputy chief of Saudi intelligence and Saud al-Qahtani, a former adviser to MBS.

In April, a Turkish court accepted an indictment on the killing of Khashoggi in the Saudi Consulate in Istanbul. The 117-page document prepared by Istanbul prosecutors accuses the 20 Saudi nationals of involvement in the gruesome premeditated murder and was accepted by Istanbul's Heavy Penal Court No. 11.

The indictment stated that suspect Mansour Othman M. Abbahussain, working as a major general and intelligence officer in Saudi Arabia, was tasked in MBS' office and was instructed by Ahmed Bin Mohammed al-Asiri to bring Khashoggi back to the country, or kill him if he resisted.

It added that Abbahussain assembled a 15-man hit squad, including himself, for the murder. He also distributed tasks among the team, separating them into three groups: intelligence, logistics and negotiation.

Abbahussain also chose the working office at the Istanbul consulate as the place to meet Khashoggi and made plans for all contingencies before, during and after the deed.

The 18 were in consensus over killing Khashoggi if he refused to return to Saudi Arabia and acted on the mutual decision to commit the crime, according to the indictment.

After the incident, and Riyadh's initial attempts to defame Turkey over the murder, President Recep Tayyip Erdoğan has brought the topic to international platforms since the murder, and his remarks have influenced international public opinion.

Turkey asked Saudi Arabia for its collaboration to uncover the truth while also contacting several other countries and international institutions. Many nations and groups issued calls for the clarification of the murder and punishment for those behind the killing.

Riyadh, however, not only denied its involvement but also tried to downplay the incident as an accidental killing, the result of a fistfight. Yet, these attempts to vindicate themselves did not survive for long as Saudi Arabia finally admitted almost three weeks after his disappearance that Khashoggi was murdered in a premeditated act but denied any involvement by the royal family.

The incident was blamed on lower-level officials, including five who are now facing the death penalty for their involvement. A Saudi public prosecutor said in March 2018 that they would seek the death penalty for five suspects among the 21 involved in the case. Ankara, on the other hand, said that Riyadh's statement is not satisfactory and demanded genuine cooperation.

While the kingdom refused to take part in bringing justice to the perpetrators, the United Nations human rights expert who conducted an independent probe into Khashoggi's killing, Agnes Callamard, said in a report in 2018 that the state of Saudi Arabia was responsible for the murder. The report also found "credible evidence" that linked MBS to the killing of Khashoggi. The rapporteur noted she had received no cooperation from Riyadh and minimal help from the United States.

While the U.S. government showed insufficient support enlightening the murder, the CIA concluded in October 2018 that MBS ordered the assassination of Khashoggi. President Donald Trump, however, disputed the CIA report controversially telling the media: "The CIA points it both ways. Maybe he did, maybe he didn't." When a reporter asked who should be held responsible for the killing, Trump responded, "Maybe the world should be held accountable 'cause the world is a vicious place."

At the time, some members of the U.S. Congress from both parties demanded the Trump administration take a stronger stance against the kingdom. Back in April 2018, legislation to impose sanctions on Saudi officials was proposed by lawmakers to the Senate but was not approved.

Meanwhile, Khashoggi's legacy continues to live on. A pro-democracy group established by him shortly before his death was officially launched Tuesday in the U.S., the Post reported.

Democracy for the Arab World Now (DAWN) aims to promote human rights and democracy in the Arab world.

Speaking to the newspaper, Sarah Leah Whitson, the organization's executive director, said Khashoggi founded the movement "based on his belief that only democracy and freedom will bring lasting peace and security to the Middle East and North Africa."

"We are going to uphold Jamal's legacy," she said.