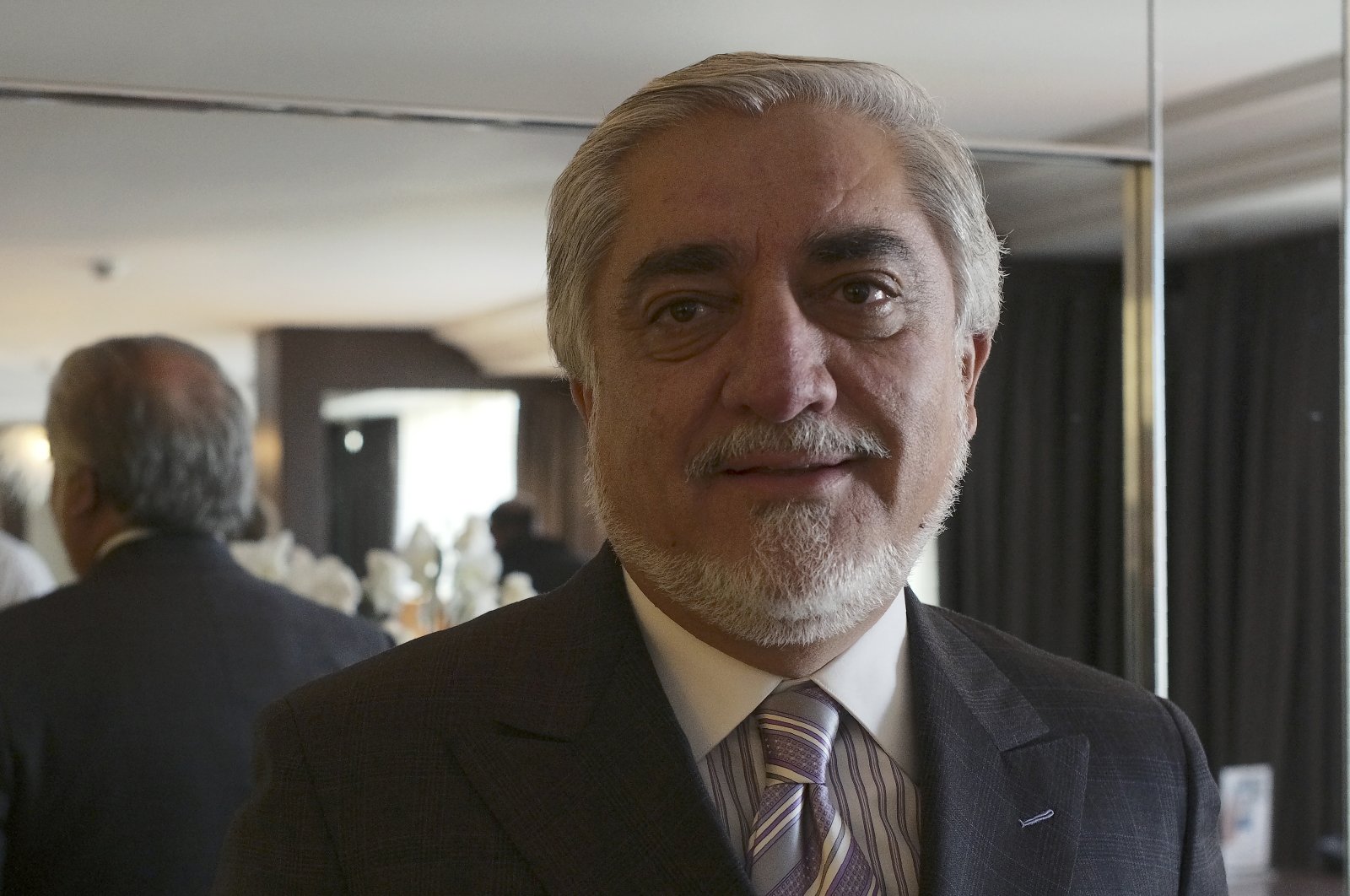 Afghanistan's chief peace envoy Abdullah Abdullah is photographed during an interview with The Associated Press, in Ankara, Turkey, Nov. 21, 2020. (AP Photo)
by Anadolu Agency
Mar 23, 2021 11:50 am

Abdullah Abdullah, the chairperson of the High Council for National Reconciliation (HCNR), which is steering peace talks on behalf of the Afghan government, hopes for "tangible progress" towards a settlement at the Istanbul meeting scheduled in April.

Speaking to Anadolu Agency (AA) in an exclusive interview, Abdullah said the presence of decision-makers in the meeting needs to be utilized to push forward the settlement of issues in Afghanistan.

"There have been a lot of discussions between both sides in the past few months in Doha. The Doha process will continue and then we have the Istanbul meeting. The Istanbul meeting will be held at a high level. There will be top leaders of Afghanistan and Taliban. That's how it is anticipated," said Abdullah, who also served as chief executive officer of the Afghan government from 2014-2020.

The head of HCNR urged that this opportunity in Istanbul should not be used to give speeches and instead it should work toward making "tangible progress."

"The final, final, final agreement, of course, it takes time, but we should at least agree on few principles. And an agreement on a cease-fire will be very, very important," Abdullah added.

Abdullah emphasized that it was time to go beyond the U.S.-Taliban agreement signed in Doha in 2020 that stipulates the withdrawal of the U.S. troops from Afghanistan by May 1. He sought to cut a deal directly between the Afghan government and the Taliban.

He said the Taliban's readiness to move ahead would be tested in the coming days, underlining that the government in Kabul is ready to have direct agreements.

"Eventually, it has to be a comprehensive agreement between us, there is something between the U.S. and the Taliban, but eventually, we need to agree. The readiness of the Taliban remains to be seen. It will be tested before the meeting in Turkey," said Abdullah.

Asked about a possible offensive the Taliban could launch if the U.S. fails to fulfill its obligations, Abdullah said the Afghan sides should not be dependent on the U.S. and should work together to get rid of foreign troops in the country.

"That (the Taliban's threat to resume hostilities) is unfortunate because eventually, we should sort out this among ourselves. We should find a solution, which will work for both sides. And if there is peace, then there is no need for the presence of the international troops," he added.

"In a peaceful Afghanistan, why do we need international troops? If this is the aim of the Taliban, that there shouldn't be foreign troops in Afghanistan, the way to achieve it is to work together as Afghans and prepare the ground for that. That is my message," Abdullah said.

He said that the U.S. would maintain its course regarding Afghanistan's peace process under the new presidential administration.

"On the support of the peace process, the U.S. policy is the same. They support the peace process. And also, they want to see military arrangements, if not tomorrow, then someday in the near future. They also need to respond to the urgency of the need for peace. It's more urgent for the people of Afghanistan to achieve peace because of the suffering of the people. Should this be the case, they will continue their efforts, enhance their activities with the countries in the region. They want the (United Nations) to be involved in it, and we will continue to work together with them," said Abdullah.

He admitted that the Afghan government has a different view on some points, including the idea of an interim government, which has been made clear to Washington.

He said that the Kabul government favors the signing of an agreement with the Taliban ahead of conducting elections. He described this as a "principled position."

"It is very premature to talk about it (interim government). These issues have been raised and are also part of that paper that was shared with us by the Americans. We responded to that," he said.

The chairperson of HCNR reminded that the Taliban has not yet responded to the U.S. State Department's letter. He said the Kabul government had pointed out weaknesses and raised concerns about various aspects of the letter.

"We said it helps if we could agree on some arrangements before going to the election with the Taliban. If the Taliban wants to go directly to election, get to an agreement and then have elections, that is also not impossible. As long as we can get an agreement," he said.

About the meeting conducted in Moscow on March 18-19, Abdullah said the parties used the opportunity to exchange views on different points informally to better understand each other's positions and concerns.

He also added that the Taliban entered Russia using the Afghan passports issued by the Afghan embassy in Qatar for the members of the negotiation team to have them at the conference table to discuss peace in Afghanistan.

"The Taliban talked about their own views, and we talked about ours. And we had an opportunity to get together. It was not a negotiation but, in a sense, that both sides are at the same place, so why not get together, to express a few things in the sort of informal way," he said.

Abdullah said the statement adopted at the end of the meeting could be assessed as "good," noting that it meets the Afghan people's expectations.

"The parties should have used the opportunity, which was there. Especially when the whole world, the people of Afghanistan are demanding us to get to a cease-fire and a comprehensive peace settlement," he said.

He added that the countries that participated in the extended "troika" – comprising of Russia, China, the U.S. and Pakistan – asked for what the people of Afghanistan are demanding.

"The message for both sides was very clear. I think it will help. But that depends again on both sides," Abdullah said.

The U.S. invaded Afghanistan after the Sept. 11, 2001 attacks. For the past 19 years, U.S. involvement and related conflicts have cost the lives of over 100,000 civilians and forced millions to flee their homes in Afghanistan.

The U.N. has repeatedly urged that opportunities for peace in the region should be seized.