Turkey's ties with actors in Afghanistan point to mediator role 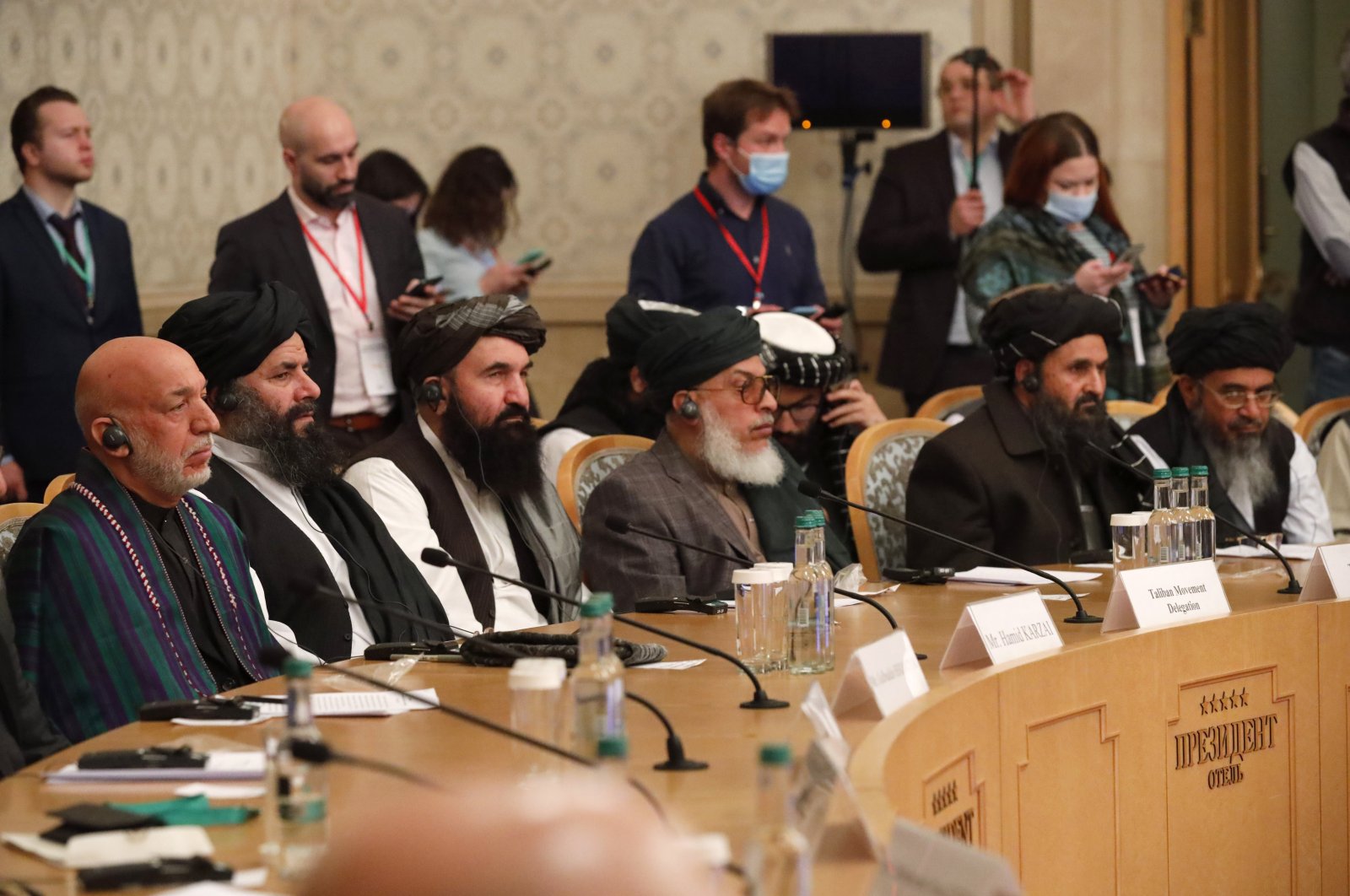 Ankara recently expressed its readiness to play a more active role in the upcoming Afghan peace talks to help resolve the decades-old conflict in the war-torn country. Turkey's ability to cooperate with all actors that have a vested interest in Afghanistan makes it the ideal candidate to mediate the revived conflict-resolution process, experts say.

Turkey is perhaps the only power in the world the Taliban and Northern Alliance in Afghanistan trust, Kaswar Klasra, a senior journalist based in Islamabad, told Daily Sabah.

“Turkey is a powerful player in the region. It is perhaps the only country in the world that can ensure peace and stability in Afghanistan. It has a cordial relationship with two major local stakeholders in Afghanistan, including the Northern Alliance and the Taliban. Both of them have shown trust in Ankara in the past as well. It can single-handedly achieve desired peace in war-torn Afghanistan,” he said, adding that Turkey has all the qualities to establish peace and stability in Afghanistan given its close ties with the stakeholders in the country, including Pakistan, Iran, the Central Asian states, Russia, the United States and NATO.

"Ankara has been also maintaining close ties with Rashid Dostum and his Uzbek supporters who are in fact a Turkic ethnic group based in northern Afghanistan and relates to Turkey more than any other NATO member state because of their shared language and culture with Turkey. The same is the case with groups of Abdullah Abdullah, Ashraf Ghani and Karzai tribe. These all ingredients make Turkey the only power in the world that can transform the dream of ‘peace and stability’ reality in Afghanistan," he added.

Tanya Goudsouzian, an Istanbul-based specialist on Afghanistan affairs, said Turkey would be a good candidate to moderate the peace talks for two reasons: "One, a recognition of Turkey's unique role as the largest and leading troop contributor from a predominately Muslim country in the NATO coalition and also because of its perception as a neutral party, more so than Qatar.”

Underlining that the previous peace talks in Qatar seem to have stalled, she said: "With the Joe Biden-led U.S. administration proposing a new peace plan, Turkey was looked upon as a location to kick-start the negotiations as a complement to the Doha process.”

It was reported earlier this month that Turkey will be asked to host a senior-level intra-Afghan peace meeting in the coming weeks to finalize a peace agreement, U.S. Secretary of State Antony Blinken said in a letter to Afghanistan's President Ashraf Ghani. Following the news, Turkey expressed its readiness to take part in mediation efforts to establish peace in Afghanistan and the region.

Ankara recently stated that Turkey will continue to support Afghan security. Turkey has been contributing to the security of Afghanistan and will keep its presence in the country as long as its Afghan brothers demand it, Foreign Minister Mevlüt Çavuşoğlu said earlier this month, marking the 100th anniversary of diplomatic relations between the two countries.

Regarding the U.S.' recent offer to the Turkish government to host a senior-level meeting between Afghan government representatives and the Taliban in the coming weeks to finalize a peace agreement, Çavuşoğlu noted that Turkey had been involved in the process since the beginning, adding that he believes that Turkey will contribute significantly to the meeting, which is set to be held in Istanbul in April.

Touching on the previous role Turkey played in the country and during the peace process, Klasra said that Turkey has been playing an indirect but vital role in making the U.S.-Taliban deal possible.

"Apart from that, Ankara has been keenly observing the outcome of the U.S.-Taliban peace deal," he said, underlining the fact that the U.S. has betrayed the process as it is unlikely to pull out troops.

"Turkey may not accept the role of mediator this time as it believes the U.S. will deceive all once again. Given a government in the U.S. that is not in a mood to honor the commitments made by the former Donald Trump administration, Turkey will not accept the offer to negotiate," he added.

Turkey played an active role in Afghanistan and the Turkish Parliament in late 2020 approved a motion to extend the deployment of Turkish troops in Afghanistan for 18 months as part of NATO's support mission in the war-torn country. The Turkish government sent troops to Afghanistan to support the NATO-led mission Resolute Support. After ending the 17-year combat mission in Afghanistan in 2018, the mission has evolved and Turkish forces now train and advise the nascent Afghan security forces. Around 12,000 foreign troops from 28 NATO allies and 14 other partner nations agreed to support the NATO mission in Afghanistan. The legislation that was first passed in 2015 also grants the government the authority to permit foreign army personnel to be transported to and from Afghanistan through Turkey.

The Afghan government confirmed last week that it would participate in two separate U.S. and Russian-backed peace conferences in Russia and Turkey in the coming weeks. The conference in Moscow on Thursday was the latest intense discussion between the Afghan government, the Taliban and the U.S. to negotiate Washington's exit nearly 20 years after U.S. troops invaded the country in response to the Sept. 11, 2001, attacks. Following the meeting, Russia, the U.S., China and Pakistan released a joint statement calling on the Afghan sides to reach a peace deal and curb violence, and on the Taliban not to launch any offensives in the spring and summer. The conference aimed to reinvigorate negotiations between the Afghan government and the Taliban in Qatar's capital Doha, which were largely stalled over government accusations that insurgents have failed to halt the violence.

The U.S. is supposed to withdraw its military from Afghanistan by May 1 as part of a deal with the Taliban – a deadline U.S. President Joe Biden recently said would be "tough" to meet, as a surge in fighting has sparked concerns that a speedy exit from the country may unleash greater chaos. The Moscow conference was the first time the U.S. had sent a senior representative to talks on Afghanistan under the format launched by Russia in 2017, while Washington is looking for support among regional powers for its peace plans. Washington also wants to jump-start the peace process and get the Taliban and the Afghan government to agree to some form of power-sharing. The Kremlin, which pulled Soviet troops from Afghanistan in 1989 after a bruising occupation, this month threw its weight behind Washington's initiative that calls for an interim government that included the Taliban.

The U.S. invaded Afghanistan in 2001, following the Sept. 11 terrorist attacks masterminded by al-Qaida leader Osama bin Laden, who was sheltered by the Taliban. The invasion toppled the Taliban regime, but the 20-year war has made Afghanistan the U.S.' longest conflict. The U.S. involvement and consequential conflicts have cost the lives of over 100,000 civilians and forced millions to flee their homes. The U.N. has repeatedly urged that opportunities for peace in the region should be seized. Despite the U.S. spending nearly $1 trillion (TL 7.22 trillion), al-Qaida is still present in Afghanistan, and an affiliate of the extremist group has taken root in the east of the country. Many Afghans fear the withdrawal of U.S. and NATO troops could lead to an upsurge in fighting between the country's rival factions. The Taliban now control about half of the country. Blinken has warned that the insurgents could make even more gains without U.S. and NATO troops on the ground.

Regarding the developments in Afghanistan in recent years, Goudsouzian said that the situation has slowly deteriorated.

"The Taliban have taken control of more territory and instability is increasing. Of particular note are the targeted assassinations of women, journalists and public figures. No one feels safe," she said.

On the progress being made at the peace talks, she said: "There seems to be a little progress, but there remain unsolved issues on post-peace agreement governance structures, U.S. troop withdrawals and Taliban assurances that they can control terrorism.”

Klasra painted a rather pessimistic picture for the near future in the country, noting that: "Uncertainty prevails in war-torn Afghanistan where the Taliban are running a parallel government. The fact is that the Taliban have taken control of more territory as compared to the President Ashraf Ghani-led coalition government. The U.S.-Taliban deal in Qatar last year, has, in fact, provided the Taliban a chance to emerge as a political force that has been recognized by the world. On the other hand, the Taliban have shown seriousness by refraining from conducting attacks on U.S. and foreign troops."

"People in Afghanistan were the major beneficiary of the U.S.-Taliban peace deal signed by the two sides in Qatar last year in February as Afghanistan witnessed fewer attacks. Financial hubs across Afghanistan flourished with a great degree of economic revival. However, this is likely to change soon. Afghanistan is preparing to witness bloodshed as another wave of terrorist attacks as the Taliban are seen flexing muscles to take on the U.S.-led forces. Taliban leadership feels it has been deceived by the U.S. They believe the U.S. didn’t honor the commitment it made last year in Doha. The Taliban’s supreme leader is currently adopting a two-front strategy. While it is still engaged in talks with the U.S. administration, on the other hand, it has already asked area commanders to standby for offensives," Klasra explained, predicting that offensives will recommence from mid-May this year.