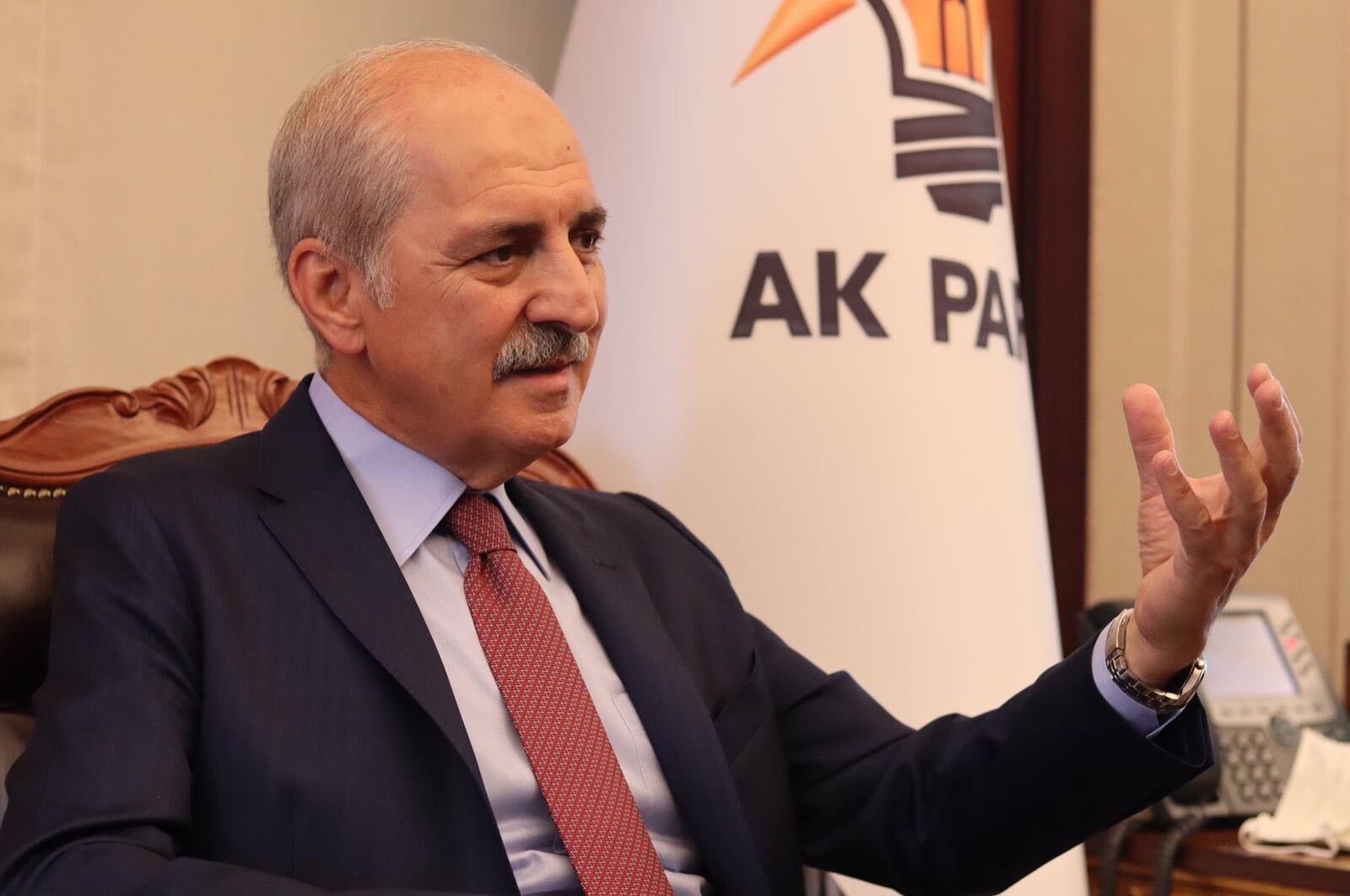 The ruling Justice and Development Party (AK Party) is not only a political party, but a political movement, AK Party deputy chairman Numan Kurtulmuş said Tuesday, adding that the party is a political movement with the cause of bringing Turkey to a better point, constantly updating this goal to carry Turkey onward.

Speaking to Daily Sabah, Kurtulmuş said that the party is not limited to the 19 years since its official founding but is a product of Turkey’s past 200 years of political struggle and is its last link. “It is the center in politics of the renewed, strong Turkey ideal,” he said, adding that apart from the 2023 goals of the republic’s 100th anniversary of its foundation, the party’s 2071 goals are meant to pass Turkey on to the next generations as a significant global power.

Kurtulmuş elaborated that four properties of the party's 19 years in power have come to prominence: AK Party is a libertarian and democratic party; a reformist party; a national party; and an encompassing and inclusivist party. He added that the AK Party was ready to overcome any deficiencies and continue on its path with increasing strength.

“We observe that a libertarian and reformist AK Party is influential on women and the youth,” the deputy chairman said, underlining that efforts to appeal to both women and the youth to include them into Turkish politics would continue.

“It is a necessity of Turkey’s demography that women, which constitute half and, according to some statistics, even more than half of our population, and the youth that constitute a large part of our society, take place in all activities of the society,” he added.

A significant rejuvenation process is taking place in the party’s congresses, Kurtulmuş explained. “Those that will be chosen for congress will prepare AK Party for the 2023 general elections and later the 2024 local elections, therefore we have to create a highly resilient cadre at this milestone," he said.

Kurtulmuş said that the party, therefore, needs people that have corresponded with the public, that are known in their circles by their honesty, sincerity and graces, that are energic, have high motivation to carry out this mission and work with a spirit of commitment.

“Each one of our political actors has to be of the morals, skills and knowledge to carry this cause forward, this movement that President (Recep Tayyip) Erdoğan shoulders. This is valid from provincial heads and administrators up to those in high positions,” Kurtulmuş stressed.

‘Our aim is to liberalize social media’

In late July, the Turkish Parliament ratified the social media regulation bill, passed by lawmakers of the AK Party and its People's Alliance partner Nationalist Movement Party (MHP), compelling platforms to comply with conditions set out by the government or face fines and bandwidth reduction. Regarding the bill, Kurtulmuş highlighted: “What we are trying to do here is not to limit social media but, to the contrary, to liberalize it for the use of citizens using it conscientiously. Yet for those wanting to turn social media into a criminal platform, those that aim to realize their own criminal inclinations through social media and attack people with defamation and insults, social media will not be such an open area.”

The bill sets a formal definition of social media providers and aims to designate a responsible representative for investigations and legal proceedings relating to offenses on platforms. It defines social network providers as real or legal entities that allow users to create, monitor or share online content such as text, visual content, voice recordings and locations for social interaction.

Asked about the “come back home” call by MHP leader Devlet Bahçeli to Good Party (IP) head Meral Akşener in early August, which invited members of the IP party to rejoin the MHP after breaking off from the party in 2016 and establishing the IP in October 2017, Kurtulmuş said that the Nation Alliance lacked common ground.

The Nation Alliance, the main electoral alliance rivaling the People's Alliance, consists of the Republican People's Party (CHP), IP and the Felicity Party with the support of the pro-PKK Peoples' Democratic Party (HDP).

Kurtulmuş elaborated that the AK Party and the MHP have two different political identities and are two different parties with differing priorities yet both are able to find common ground on basic issues.

“This actually is a rapprochement that started on the night of the July 15 coup attempt. The AK Party and the MHP came together and made an alliance to stand against coups, fight against tutelage, protect the nation against imperialist attacks, and act as one without making the distinction of parties regarding Turkey’s national interests,” Kurtulmuş stressed, saying that this alliance is not a political bargain.

Saying that the Nation Alliance lacked common ground, Kurtulmuş said that “the only common point was that President Erdoğan would go.”

He explained that the alliance was supported openly or discretely by some parties such as the Gülenist Terror Group (FETÖ) and the PKK.

He said that the opposition had to answer and elaborate on how they envisage the administration of the country if they win the upcoming elections. In terms of Turkey’s foreign policy, economy, relations with regional countries and the fight against terrorism, the policies of the Nation Alliance need to be clarified, Kurtulmuş said.

“For example, will the HDP support the removal of the PKK completely in the fight against terrorism? The same is valid for FETÖ. How will the nationalist, patriotic IP voters support a political (platform) that integrates with the separatist thesis of the HDP?” Kurtulmuş asked.

Its mayors have also been accused of undermining municipal services, allowing the PKK to dig ditches in the streets and launch attacks on police and soldiers when the terrorist group adopted an urban warfare strategy in July 2015 and ended a two-year reconciliation period.

The CHP has refrained from officially including the HDP in its electoral alliance amid fears of a possible backlash from its secular-nationalist voter base.

On the foreign policy scene, Turkey cannot be threatened by sticks or deceived by carrots anymore, Kurtulmuş stated, adding that those that have a neo-imperialist thesis regarding Turkey should rethink their positions.

“We now have a Turkey that knows what it wants, that calculates what it wants and strives for the establishment of a new and just world order as a strong regional power. Therefore, I believe that some politicians in Europe still speak with old habits,” Kurtulmuş said, referring to a senior European Union diplomat that told Reuters that "as well as sticks (sanctions), there will be carrots too to get Ankara to engage in serious dialogue. These carrots could be progress on a new customs union agreement or more money for the refugee program."

The statements of the EU diplomat came after the bloc on Friday called for dialogue regarding the Eastern Mediterranean and urged Ankara to refrain from unilateral steps that could stoke further tensions in the region.

Turkey – the country with the longest coastline in the Eastern Mediterranean – has sent out drillships to explore energy reserves on its continental shelf. Greece disputes Turkey's current energy exploration activities in the Eastern Mediterranean, trying to box in Turkish maritime territory based on the proximity of its islands to the Turkish coast.

Ankara has been firm in declaring that Turkey and the Turkish Republic of Northern Cyprus (TRNC) have rights in the region.

Kurtulmuş reiterated that Turkey is ready for dialogue but that it was unacceptable that the EU would wag its finger at Ankara or that the bloc used "carrots" like sneaky foxes would do. Saying that Turkey always clearly declares its position by keeping diplomatic channels open, Kurtulmuş underlined that at the same time, Ankara throws its weight behind the decisions it makes to prove it is not bluffing but rather making a political decision.

“That Oruç Reis (seismic research vessel) is currently protected by both Turkey’s planes and its navy signals that we do not only speak with words but also will not give up on Turkey’s sovereignty rights whatever the price, just as the president said,” Kurtulmuş added.

Stressing that no one could ask Turkey what it is doing in the Eastern Mediterranean, Kurtulmuş said that the question instead should be what countries located thousands of kilometers away are doing in the region.

“Why did they put forth the Sevilla Map out of the blue when discussions on the Eastern Mediterranean started?” Kurtulmuş said, referring to the map aimed to reduce the Turkish maritime zone to just 41,000 square kilometers (15,830 square miles). "Even though the map was not politically recognized, it was a reflection of an objective.”

“We know that there are some who calculate how Turkish territory can be divided through these maps. It is like a new Sevres map that aims to erase Turkey from the territorial waters of what we call our Blue Homeland and the exclusive economic zone (EEZ) where we exercise our international capacities,” he added, saying that Turkey could not stand idly by and instead inked the maritime deal with Libya, which “strengthened the hand of Turkey.”

On Nov. 27, Ankara and Libya's U.N.-recognized Government of National Accord (GNA) signed a deal on maritime boundaries of the two countries in the Eastern Mediterranean, asserting Turkey's rights in the region in the face of unilateral drilling by the Greek Cypriot administration and clarifying that the TRNC also has rights to the resources in the area.

“We do not want the Eastern Mediterranean to be a sea of fighting and conflict, but rather of peace and welfare,” the deputy chairman said.

Regarding a newly surfaced video in which the current frontrunner in the U.S. presidential race Joe Biden said he would seek a regime change in Turkey and expressed his willingness to work with "opposition leadership" in the country to topple President Recep Tayyip Erdoğan in Turkey's 2023 elections, Kurtulmuş said the statements were “in violation of democracy and political morals.”

Kurtulmuş stated that the U.S. got used to supporting coups as they were behind previous ones and that they believed the same could be done once again.

“He must know his place. Currently, Biden is not the president of the U.S., only a candidate racing for the position. I reiterate; what if he is? He has to address Turkey in accordance with political morals, comprehension and intellect,” he said.

UAE-Israel deal a betrayal of Palestinian cause

On Aug. 13, Israel and the UAE announced a U.S.-brokered agreement to establish diplomatic ties that will see the Jewish state postpone plans for the annexation of the land it illegally occupies in the West Bank that is sought by the Palestinians for their future state.