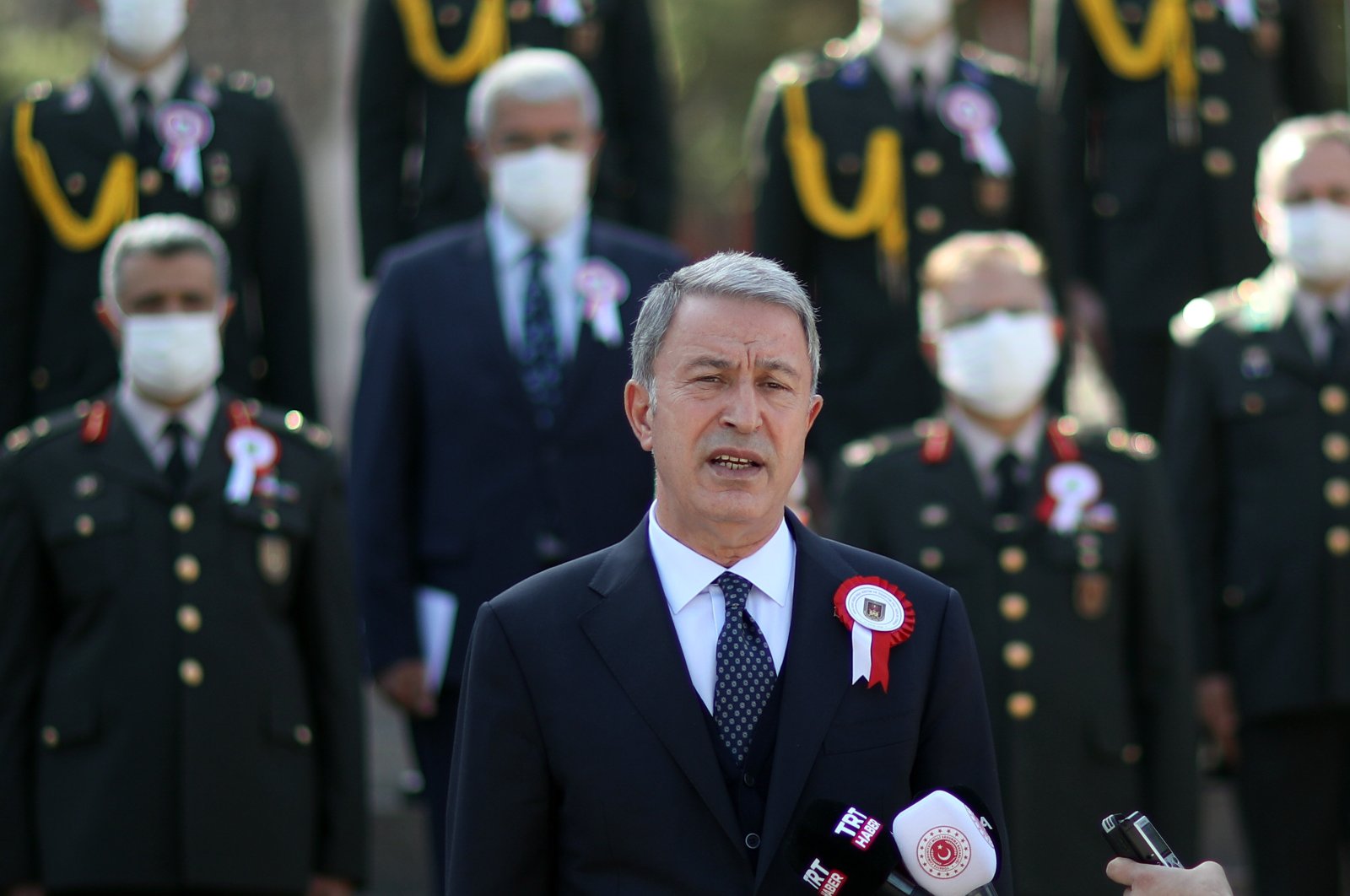 Defense Minister Hulusi Akar has warned Greece to refrain from getting in over its head in the Eastern Mediterranean.

He added that such pursuits lead to a dead-end and reiterated Turkey's determination to protect its rights. He also urged third parties to be objective.

"Turkey expects Greece to back down from its spoiled and selfish stance, and respect whatever is required by international law, humanity and ethics," Akar said in a teleconference meeting with the Turkish commanders-in-chief.

He noted that Greece needs to demilitarize the islands in the Aegean Sea and review some issues, including the islands' air space and coastal waters.

Akar also highlighted the importance of the sovereignty and independence of the Turkish Cypriots living in the Turkish Republic of Northern Cyprus (TRNC) and the recognition of their rights by everyone.

He noted that the issue of maritime jurisdiction zones will not be determined by Greece, a university, or several people alone.

"We are talking about a fair share of resources, in line with international law, justice and ethics," Akar said, adding that Turkey is open to dialogue and negotiations in this regard and favors a political solution.

The meeting also focused on a number of other issues, including the military-defense cooperation pact in Libya, the Turkish troops in Afghanistan, the Turkish military representative in NATO and the peace forces in the TRNC.

"Our neighbors need to understand that the 'me first' approach will not get them anywhere," Akar said, adding that finding a solution is easier when they realize this fact and Turkey will not accept a solution that disregards any of the mentioned factors.

The defense minister continued by saying that Turkish research vessels are carrying out technical and scientific work and the military is there to protect them.

Akar also highlighted the importance of the impartiality of mediators.

"They need to realize that we will not reach anywhere with sided and biased approaches. If they really want peace they need to know that they will reach a solution if they approach both sides in the same manner," Akar said, adding that third parties cannot dogmatize rules against Turkey, which has a 1,870-kilometer-long (1162-mile-long) coastline on the Eastern Mediterranean.

"We need to reach a consensus and everybody needs to respect our rights," Akar said.

Turkey has rejected the maritime boundary claims made by Greece and the Greek Cypriot administration in the region and stressed that these excessive claims violate the sovereign rights of both Turkey and the Turkish Republic of Northern Cyprus (TRNC).

Turkey – the country with the longest coastline in the Eastern Mediterranean – has sent out drillships to explore for energy on its continental shelf, saying that Ankara and the TRNC have rights in the region.

Following a series of technical meetings between the military delegations of Greece and Turkey at NATO headquarters in Brussels, a bilateral military deconfliction mechanism was established last month.

According to NATO, the mechanism is designed to reduce the risk of incidents and accidents in the Eastern Mediterranean and includes the creation of a hotline between Greece and Turkey to facilitate deconfliction at sea or in the air.