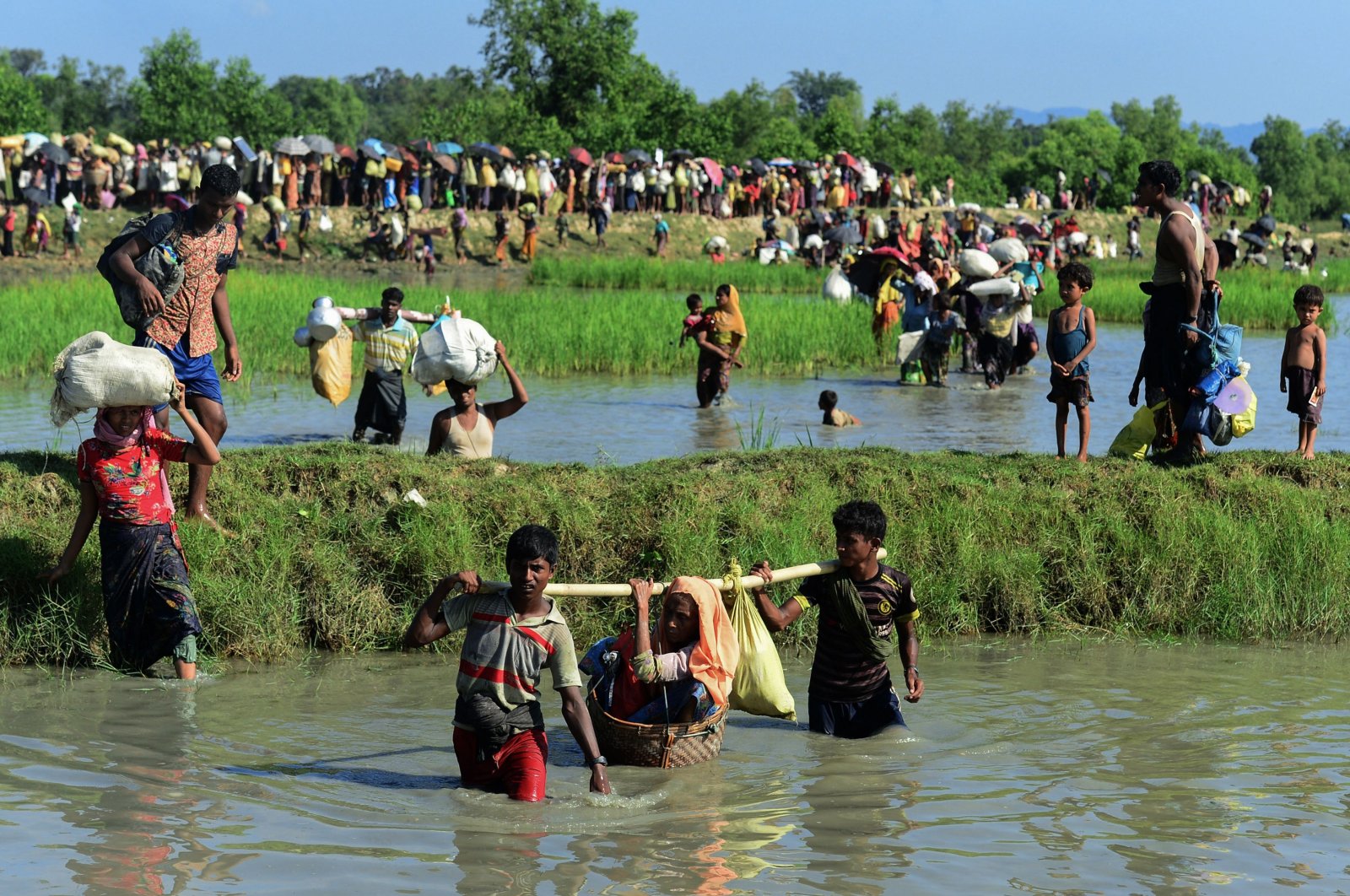 Rohingya refugees carry a woman over a shallow canal after crossing the Naf River as they flee violence in Myanmar to reach Bangladesh in Palongkhali near Ukhia, Oct. 16, 2017. (AFP Photo)
by DAILY SABAH WITH AA Nov 11, 2020 10:54 am
RECOMMENDED

Noting that the general elections constitute "an important milestone" in Myanmar's democracy and reform process, the Turkish Foreign Ministry said: "Nevertheless, the disenfranchisement of the Rohingya Muslims and rejection of the candidacies of many Muslims indicate a serious deficiency in terms of the inclusiveness of the elections."

"We wish that the new government will take steps to rectify these shortcomings and ensure the strengthening of democratic institutions as well as democratic principles and practices including unimpeded representation," the statement added.

The Southeast Asian nation of 54 million held general elections Sunday, the second time since the 50-year military rule ended in 2011.

A total of 5,643 candidates representing more than 90 political parties contested for 1,171 national, state and regional seats.

The ruling National League for Democracy (NLD) party claimed it has so far won 392 seats in the 642-member national legislature.

The Union Election Commission is expected to announce the official results at a news conference scheduled for Wednesday.

Nobel Peace Prize winner Suu Kyi has been criticized for turning a blind eye to the genocide of the Rohingya minority in the country's western Rakhine state by the military.

Along with the Rohingya, who were denied voting rights ahead of the 2015 polls, voting was also canceled in large parts of states including Rakhine, Shan and Kachin due to "security concerns."

More than 740,000 Rohingya fled Myanmar into neighboring Bangladesh in 2016 and 2017 as the military unleashed a series of atrocities that saw entire villages being burned down, extrajudicial killings and rape.

The U.N. has called it a campaign that had "genocidal intent."

Ankara has always been among the most vocal supporters of the community, repeatedly drawing attention to their plight. Turkish charities joined forces after the mass displacement of Rohingya Muslims in 2017 and quickly collected millions of lira for setting up a lifeline of humanitarian aid to camps in Bangladesh.

Turkey's Disaster and Emergency Management Authority (AFAD), the Turkish Red Crescent and the Turkish Cooperation and Coordination Agency (TIKA) are at the forefront of accommodation and aid efforts for the displaced.