Ankara lashes out at Athens for stoking tensions in East Med 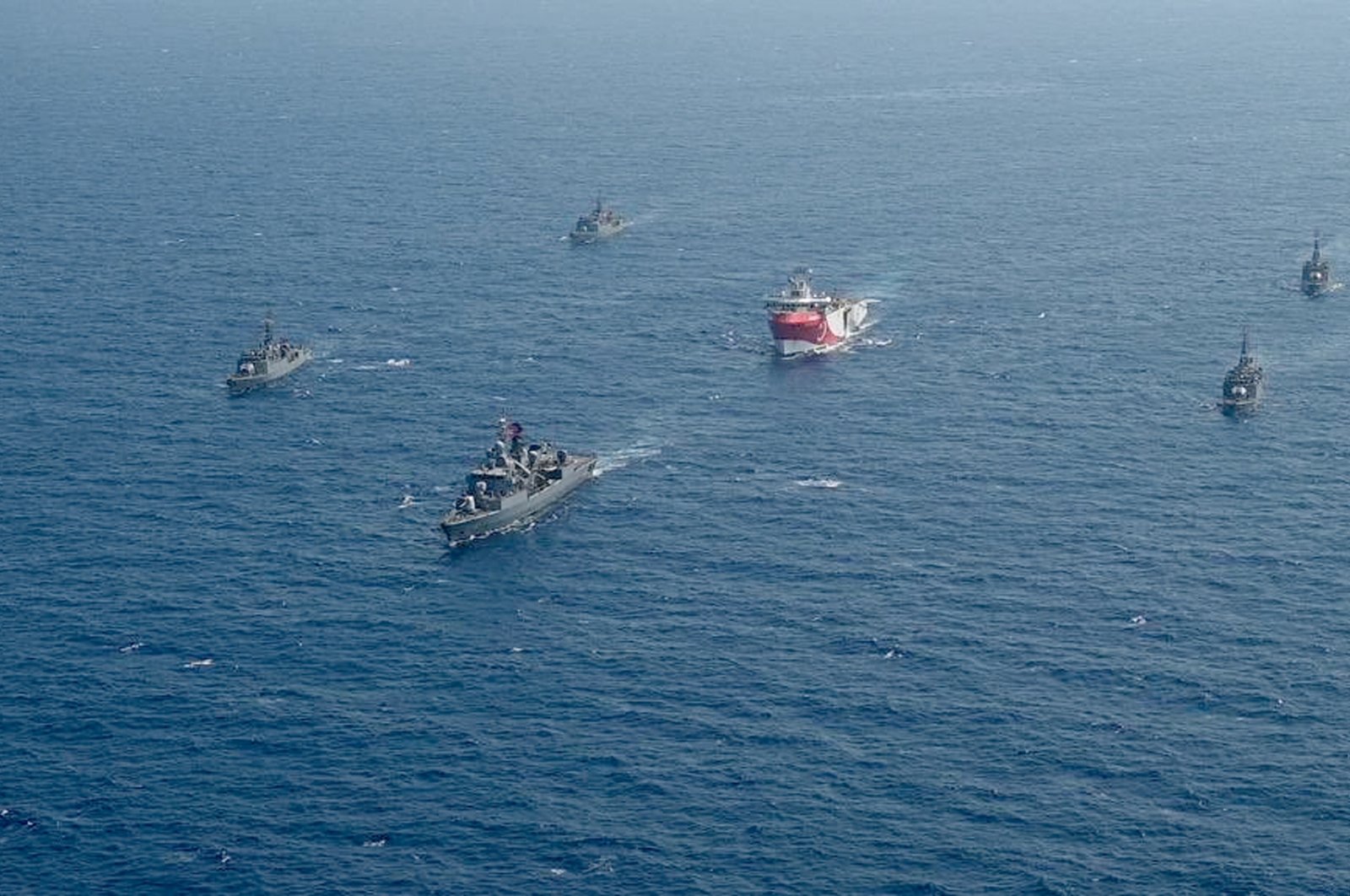 Turkey's research vessel, Oruç Reis, center, is surrounded by Turkish navy vessels as it was heading in the west of Antalya on the eastern Mediterranean, Aug. 10, 2020. (AP Photo)
by DAILY SABAH WITH AGENCIES Aug 25, 2020 12:24 pm
RECOMMENDED

Turkey is accusing Greece of fueling tensions in the Eastern Mediterranean as the latter insists on attempts to extort Ankara's rights in the region with baseless claims and actions.

President Recep Tayyip Erdoğan on Monday called Greek's Navtex alert a "spoiled act" that endangers the coastal and navigational safety of all ships in the region.

From now on, Greece will be responsible for all conflicts in the region and will be at a disadvantage, Erdoğan expressed during his speech following a cabinet meeting.

The Oruç Reis and the vessels accompanying it will not retreat from their activities in the region, he said.

Greece said Monday that it will conduct a navy and air force exercise in an area of the Eastern Mediterranean where Turkey is surveying for oil and gas.

Authorities said that the live-fire exercises would start Tuesday southeast of the Greek island of Crete and end Thursday.

Hours after Athens' announcement, Turkey also on Monday said that its navy will carry out a military exercise south of the Greek island of Crete in the Eastern Mediterranean on Tuesday.

“Turkish and allied navy ships will conduct maritime training in the Eastern Mediterranean on Aug. 25, 2020, in order to promote coordination and interoperability,” the National Defense Ministry said on Twitter.

The Oruç Reis research ship is surveying for oil and gas in the area, escorted by warships. Turkey announced Sunday the seismic vessel would be continuing work through Aug. 27.

The escalating tension has raised concerns of potential conflict between the two regional rivals, which have come to the brink of war three times since the mid-1970s, including once over prospecting rights in the Aegean Sea.

"(Greece) tries to irritate us in the Eastern Mediterranean," the minister said while discussing Erdoğan's previous remarks about responding to any actions by Athens as necessary.

"I hoped Greece would not engage in such actions," he expressed, underlining that Turkey's movements in the region will continue as planned despite Athens' hostile attitude.

Turkey resumed energy exploration earlier this month in the region after Greece and Egypt signed a controversial maritime delimitation deal.

Greece and other countries have tried to box in Turkey's maritime territory and energy exploration rights, despite Turkey having the longest coastline on the Mediterranean.

Berlin rolls up sleeves to mediate

Meanwhile, Germany's Foreign Minister Heiko Maas headed to Greece and Turkey on Tuesday in an effort to ease increasing tension between the two neighbors.

“Turkey and Greece are our NATO allies. There can only be solutions for the disputed questions surrounding the gas deposits in the Eastern Mediterranean on the basis of international law and in sincere dialogue,” Maas said before his visit to the two countries.

“The tensions are not just weighing on the relationship between the EU and Turkey. A further escalation can only damage all sides, but above all those immediately involved on the spot,” he added.

“The windows for dialogue between Greece and Turkey must now be opened further and not closed,” Maas said. “For this, instead of new provocations, we finally need steps toward de-escalation and a start to direct talks,” he underlined.

Maas’ trip comes ahead of a meeting of European Union foreign ministers in Berlin later this week, at which Turkey will be discussed. Maas noted that “Greece’s voice will have particular weight.”

Turkey has consistently contested the Greek Cypriot administration’s unilateral drilling in the Eastern Mediterranean, asserting that the Turkish Republic of Northern Cyprus (TRNC) also has rights to the natural resources in the area.

According to the United Nations Convention on the Law of the Sea (UNCLOS), while a country is able to stretch its territorial waters only 12 nautical miles out to sea, when it comes to an exclusive economic zone (EEZ) in which it has rights to fishing, mining and drilling, the area can extend for an additional 200 miles. However, if the maritime distance between the two countries is less than 424 miles, a bilateral deal is needed to determine a mutually agreed-upon dividing line of their respective EEZs.

Greece, on the other hand, claims that the islands also have their own EEZs, a claim that would reduce Turkey’s own territory remarkably.

Heading to Greece first, Maas urged Greece and Turkey to solve their dispute, warning of the risk of a military confrontation during a press conference with Greek Foreign Minister Nikos Dendias.

“The current situation in the Eastern Mediterranean is equivalent to playing with fire,” Maas said in Athens. “Every little spark can lead to catastrophe,” he emphasized.

Dendias, on the other hand, claimed that Greece is ready for dialogue to help dissolve tensions with Turkey, overlooking previous calls from Ankara for dialogue.

Back on Aug. 13, Erdoğan said that a win-win solution for the ongoing crisis with Greece is possible through dialogue; however, his calls for talks have gone unanswered.