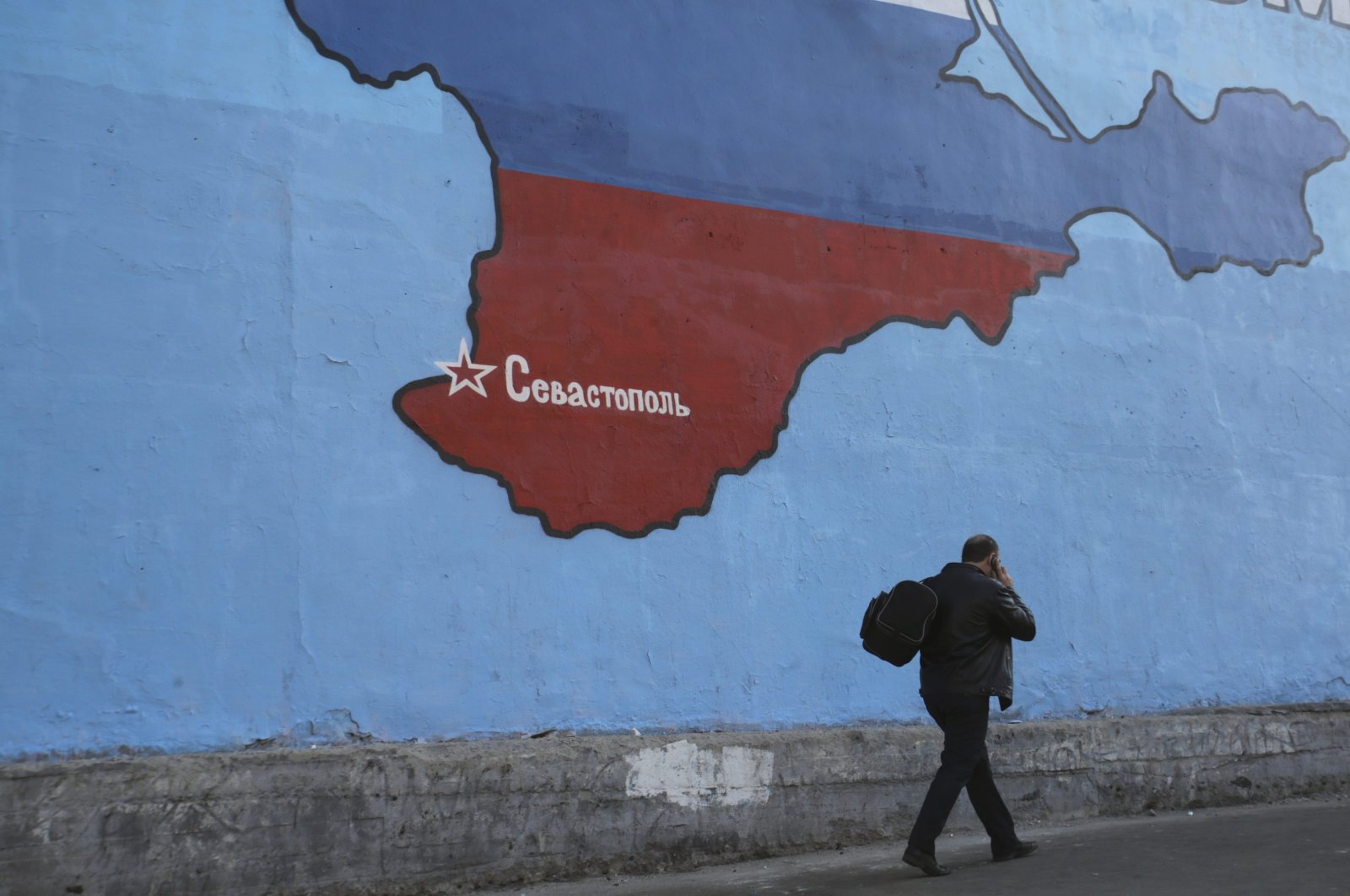 A man passes a mural showing a map of Crimea in the Russian national colours on a street in Moscow, Russia, March 25, 2014. (Reuters Photo)
by Anadolu Agency Oct 21, 2021 9:36 am
RECOMMENDED

Despite the good relations Turkey has with both Ukraine and Russia, Ankara's position on Crimea is clear, a Turkish official said Wednesday.

"There is a problem between Ukraine and Russia. Turkey is being close to Russia and Ukraine but making its arguments and ideas very clear. We do not recognize and accept the annexation of Crimea by Russia. We say that Ukrainian territorial integrity has to be protected. But on the same side, we also have good relations with Russia," said Kılıç.

He also touched on the Nagorno-Karabakh conflict, noting that the status quo in the region has evolved over the past year.

"Armenia, I believe, has an opportunity here to grasp the chance that is in front of it and have at least a normalization process with Azerbaijan, Turkey, Georgia, all the countries that it's neighboring," he said, adding "this will also contribute to a better relationship with some other neighbors."

On relations with Greece, Kılıç said Athens uses the European Union "as a sort of big brother" and that the bloc has "a double standard towards Turkey."

He stated that the EU granted membership to the Greek Cypriot administration, "even if the Turkish side of Cyprus is not recognized as a state."

Kılıç said that although Turkey has problems with some of its neighbors, that does not mean that it does not want to improve relations with them, adding "we are not saying we want to have any kind of claims on any country's sovereignty."

"There are some misunderstandings, some understandings that are different, and some things on which we feel different. But we are always in dialogue," he said.

Discussing Europe, Kılıç said that the continent and the EU have some big questions ahead.

"Brexit being one part of it; what will happen afterwards. We are seeing that Britain has serious problems with its day to day life due to some effects of Brexit. The German election has just happened. We will see the new government that will be formed in the future, in a couple of months, I think," he said.

"(German) Chancellor (Angela) Merkel is now leaving office. She has been a very balancing actor in politics and also European politics, but I say always that Germany has a balancing role. It doesn't matter who the chancellor is, but of course, Merkel's personal input there was important," he added.

Kılıç said that energy and the post-COVID-19 world will dominate the future agenda and will require collective action.

"There's talk about a (sharp) increase in energy prices in Germany. And there are increases in food prices around the world. And this is a challenge for all of us. All our citizens are feeling this," he said.

"Turkey will play its role at the table," he added.