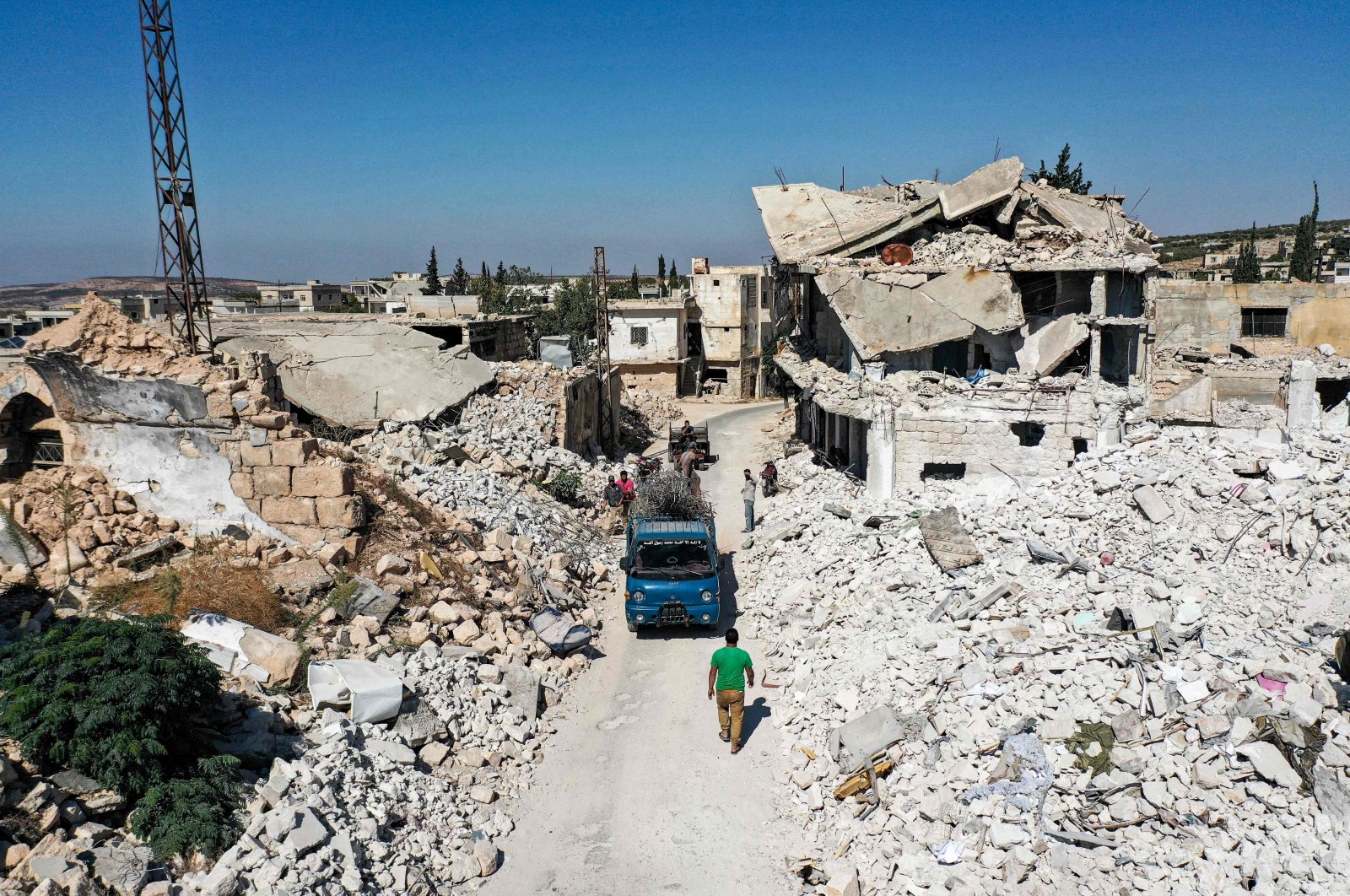 People collect scrap steel rods from the rubble of the aftermath of an aerial bombardment in the town of Ihsim, Idlib province, northwestern Syria, Oct. 18, 2020. (AFP Photo)
by DAILY SABAH WITH AA Oct 23, 2020 2:51 pm
RECOMMENDED

At least 168 armed elements, including Iran's Revolutionary Guard Corps (IRGC) and foreign terrorist groups under its command, have arrived at the front line in Syria's northwestern Idlib to fight alongside Assad regime troops.

According to information obtained by Anadolu Agency (AA) on Friday, some 75 soldiers from the IRGC passed through Iraq and entered Syria in 30 military vehicles the previous day.

The Iranians met with a total of 93 armed elements affiliated with Iran-backed terrorist groups and pro-regime Shabiha militias in the province of Deir el-Zour in eastern Syria.

The armed militias joined the ranks of the Bashar Assad regime on the front line in the Idlib de-escalation zone, moving from Deir el-Zour on Thursday.

The Astana peace process to end the Syrian conflict was launched in January 2017 by Turkey, Russia and Iran. While Turkey is the main backer of the moderate opposition groups against the Syrian regime led by Bashar Assad, Russia has provided strong support to the regime leader since its direct military involvement in 2015.

During the Astana meetings between May 4 and May 5, 2017, led by Turkey, Russia and Iran, four de-escalation zones were created. The zones included Idlib and some regions of the neighboring provinces – Latakia, Hama and Aleppo – north of Homs province, eastern Ghouta in the capital Damascus and the southern parts of the country, Daraa and Quneitra. The regime and Iran-backed terrorists, with air support from Russia, however, captured three out of the four zones and turned their attention to taking Idlib.

Turkey and Russia reached an additional agreement in Sochi to strengthen the cease-fire in September 2018. Russia and regime forces launched operations to capture the whole area in May 2019, seizing many large settlement areas within the Idlib de-escalation zone. Lastly, a new agreement was reached between Turkey and Russia on March 5 in Moscow. The cease-fire, occasionally violated by the regime forces, is largely protected.

During the 2017-2020 period, attacks by regime forces and Russia forced nearly 2 million civilians to migrate to areas close to the Turkish border.

Deir el-Zour, near the Syrian-Iraqi border, is the city that provides the land connection between Iran and Lebanon. Pipelines and trade routes from Iraq and Jordan also pass through this city. Its center and west fell into the hands of the Assad regime with the help of Iranian-backed groups and Russia after the withdrawal of Daesh terrorists in November 2017.

The Iran-backed foreign terrorist groups, the "black force" of the regime, are mostly deployed in Deir el-Zour. Members of the IRGC command Iranian, Iraqi, Lebanese, Afghan and Pakistani origin groups based there, where Sunni Arabs live. Other parts of Deir el-Zour province, east of the Euphrates, are occupied by the U.S.-backed YPG terrorist group, the PKK’s Syrian offshoot.

The deputy foreign ministers of Turkey and Russia, Sedat Önal and Mikhail Bogdanov, discussed settling the crises in Libya and Syria during a meeting held in Moscow on Thursday, during which they pointed out “the relevance of further coordinated efforts of Russia and Turkey, including as part of the Astana process, on assisting in reaching a comprehensive settlement on the basis of Resolution 2254 of the United Nations Security Council (UNSC) and the commitment to the principles of the unity, territorial integrity and sovereignty of Syria.”