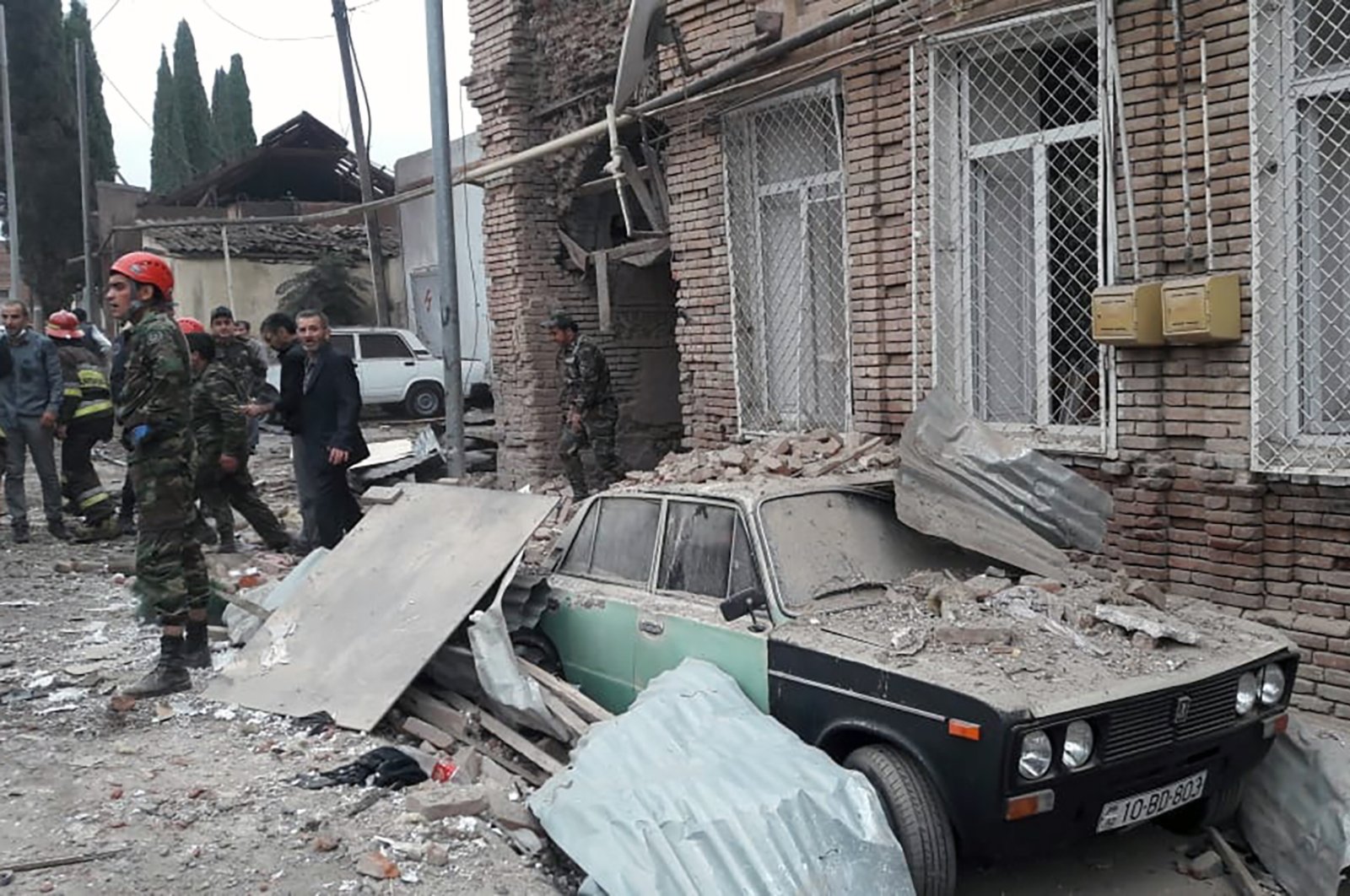 Emergency personnel work in a damaged area of the Azerbaijani city of Ganja following an Armenian rocket strike on Oct. 4, 2020. (AFP Photo)
by DAILY SABAH WITH AA Oct 05, 2020 11:03 am
Edited By Emre Başaran

Armenian forces continued to carry out missile and rocket strikes targeting civilian settlements in Azerbaijan's densely populated areas, including Ganja, Barda and other areas despite calls for calm

Armenian military units continued to attack civilian areas in Azerbaijan’s Ganja, Barda, Beylagan and other cities with missiles and rockets, the aide of the Azerbaijani President Ilham Aliyev said Monday.

In a statement on Twitter, Hikmet Hajiyev called Armenia’s attacks “barbarism and vandalism.”

Stepping up its bellicose rhetoric, the separatist leadership of Nagorno-Karabakh threatened to "expand subsequent (military) actions to the entire territory of Azerbaijan."

"I call on the residents of these cities to immediately leave," Harutyunyan said in a post on Facebook.

Azerbaijan's second-biggest city, Ganja, came under heavy missile attacks by Armenian forces leading to the death of an Azerbaijani civilian while four others were wounded.

In statements posted on its website on Sunday, Azerbaijan's Defense Ministry said Ganja, a city in the country's west, and several other civilian areas were under fire from rockets and shelling.

"Indiscriminate missile attacks are launched against Ganja, Füzuli, Tartar and Jabrayil cities of Azerbaijan from the territory of Armenia. Ganja is the second biggest city of Azerbaijan. 500.000+ population," Hajiyev said in a tweet.

Armenia denied that it had directed fire "of any kind" toward Azerbaijan, but the Armenian separatist leader said his forces had destroyed a military air base in Ganja.

Arayik Harutyunyan said his forces would target Azerbaijani cities, adding: “Permanent military units located in the large cities of Azerbaijan from now on have become the targets of the defense army."

"According to information from reliable Azerbaijani sources, a total of 22 settlements have been liberated from occupation so far in the operation launched by Azerbaijani Armed Forces to reclaim occupied territories," the ministry said.

The military hung Azerbaijani flags in areas liberated from Armenian occupation, a statement by the Azerbaijani Defense Ministry said on Twitter.

The ministry shared a video showing Azerbaijani troops walking on the streets of Talish village, which had been occupied by Armenia since 1994.

In a TV address on Sunday, Aliyev said his country was determined to liberate Nagorno-Karabakh from Armenian occupation.

"Nagorno-Karabakh is Azerbaijani territory. We must return, and we will return," he said, adding that Azerbaijan had waited 30 years to recover its lands.

Aliyev urged Armenia to set a timetable for the withdrawal of its occupation forces, while he vowed to rebuild all of the cities that were liberated, including restoring all mosques that were damaged by Armenian forces.

Turkish officials have expressed solidarity with Azerbaijan, saying that they would provide necessary support if Baku asked for it.

As soon as the violations began, Ankara reiterated its support for Azerbaijan, with many officials, mainstream parties and the Turkish Foreign Ministry declaring unwavering backing of its brotherly Turkic nation.

However, although Turkey’s position is in line with international law, some countries tried to target Ankara for its support of Baku.