Armenia has proven it is not trustworthy, Turkey's foreign minister says 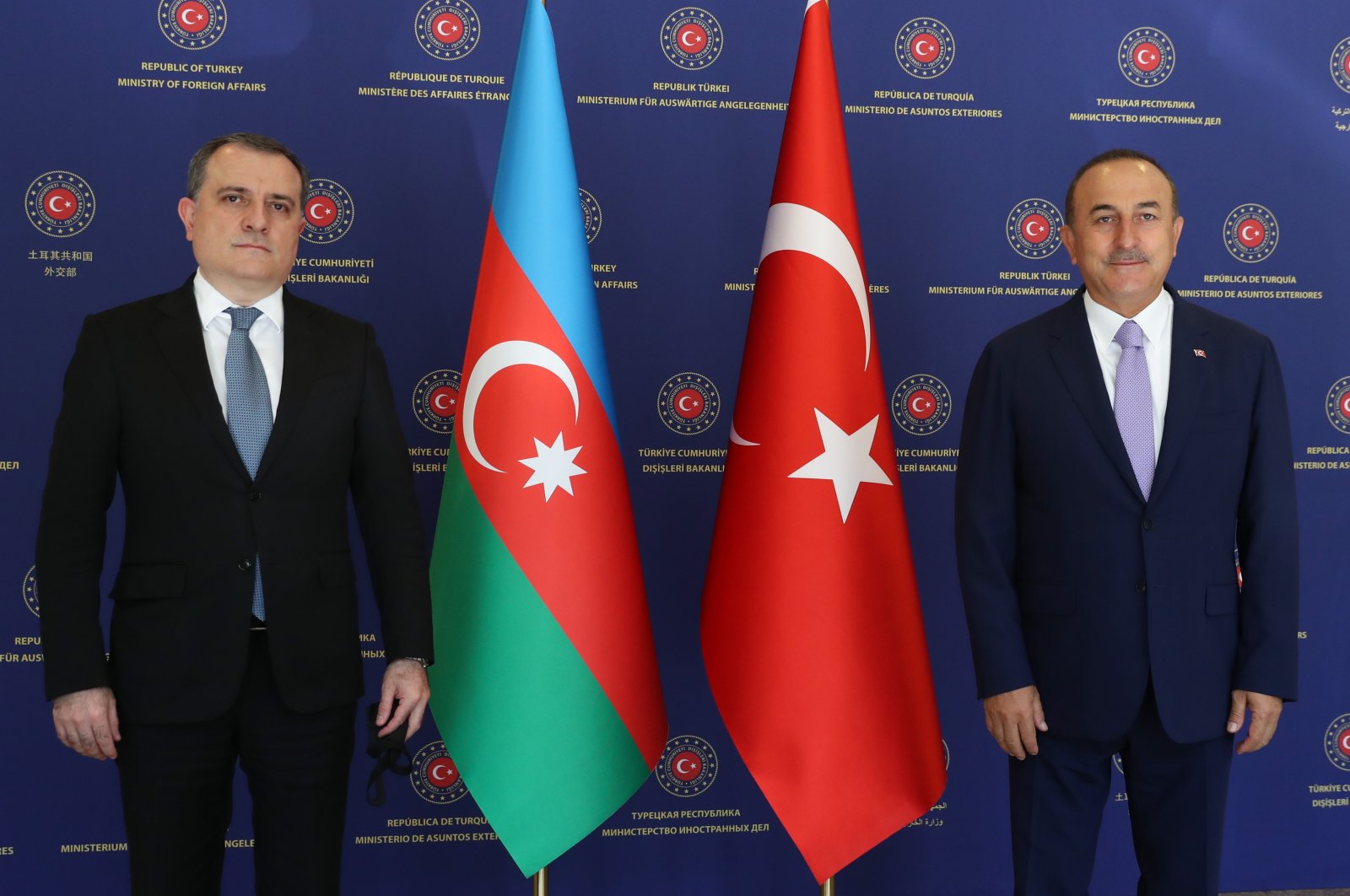 Foreign Minister Mevlüt Çavuşoğlu stated that the U.N. and other institutions have fallen short in addressing the territorial dispute between Azerbaijan and Armenia, while Yerevan has eschewed overtures for negotiations and favored military aggression

Foreign Minister Mevlüt Çavuşoğlu has criticized Armenia for refusing to establish a dialogue to resolve the problems in Nagorno-Karabakh, reiterating Turkey's determination to support Azerbaijan in the dispute.

"Armenia has proven it is not a trustworthy country," Çavuşoğlu told reporters at a joint news conference with Azerbaijani counterpart Jeyhun Bayramov on Tuesday. He added that Yerevan has hesitated to establish dialogue in order to solve its dispute with Azerbaijan.

“Azerbaijan is not alone,” the minister continued, “We work under the notion of ‘one nation, two states,’ and we have conducted our meeting today with the same understanding.”

“Armenia for years has been occupying 20% of Azerbaijani territory as well as the Nagorno-Karabakh region. Despite all the decisions given until today, that is, by the U.N., the European Council and the Organisation for Security and Co-operation in Europe (OSCE), Armenia has not neared solving the problem while the latest attack proved to the world that it is not a reliable partner for negotiations,” Çavuşoğlu stated, referring to the border clashes between Baku and Yerevan in the northwestern Tovuz border region on July 12.

As a result, at least 12 Azerbaijani soldiers, including a major general and a colonel, were killed and another four soldiers wounded. A 76-year-old Azerbaijani citizen also lost his life.

Rather than in the Nagorno-Karabakh region, which constitutes the main source of tensions between Azerbaijan and Armenia, Yerevan this time attacked the Tovuz region – an area with strategic and economic significance in terms of energy, hosting strategically important pipelines.

International organizations, including the U.N., have demanded the withdrawal of the occupational forces.

“There are clear decisions. Why has this problem not been solved despite these decisions? The reason is that the international community, especially the Minsk group, has not engaged in honest efforts. Within the scope of Azerbaijan's territorial integrity, we wish for this problem to be solved with diplomacy and dialogue,” the top diplomat said.

“However, the OSCE has to get its act together; it has to put effort apart from the routine announcements,” Çavuşoğlu said, reminding that OSCE visited Turkey ahead of the Armenian attack and that Ankara stated these problems openly.

“Though we have clearly stated our thoughts, underlined that this problem has to be solved with diplomacy, in a peaceful manner and within the framework of international law, we will stand by Azerbaijan whichever way they prefer,” he added.

The meeting marked Bayramov's first visit abroad in his capacity as foreign minister. The politician, 47, who had served as education minister since April 2018, was appointed to the post by decree of Azerbaijan's President Ilham Aliyev on July 16. Longtime Foreign Minister Elmar Mammadyarov was dismissed from his position in July in the wake of the border conflict.

The sacking of Mammadyarov, who held the post since 2004, came a day after Aliyev publicly criticized him at a government session for his approach in dealing with the Armenia-Azerbaijan conflict.

Çavuşoğlu further underlined that cooperation in all fields would continue to be enhanced and that Azerbaijan was now the primary natural gas supplier for Turkey. Meanwhile, he added, both countries would continue to work to reach the target of a $15 billion trade volume set by the two countries’ presidents.

“Mutual investment increases, especially in the field of energy, Azerbaijan is carrying out its greatest projects in Turkey while Turkey is the biggest investor country in Azerbaijan apart from the energy sector,” Çavuşoğlu stated, adding that cooperation will also be enhanced in the fields of culture, education and consulates.

"Azerbaijan-Turkey relations, which are based on historical roots and brotherhood, are developing in all areas, including the political, economic, humanitarian and military fields," Bayramov continued, adding that the development of relations with strategic partner Turkey is Azerbaijan's foreign policy priority.

Çavuşoğlu also reiterated that visa obligations had been mutually removed between the two countries and that efforts were ongoing to increase the visa exemption period from 30 days to 90.

"This is not enough. Turkish and Azerbaijani citizens should not need passports for mutual visits. We have realized this ability in our cooperation with Georgia and Ukraine. Since our new IDs include all kinds of information, we have presented proposals to pave the way for travel via ID," Çavuşoğlu stated.