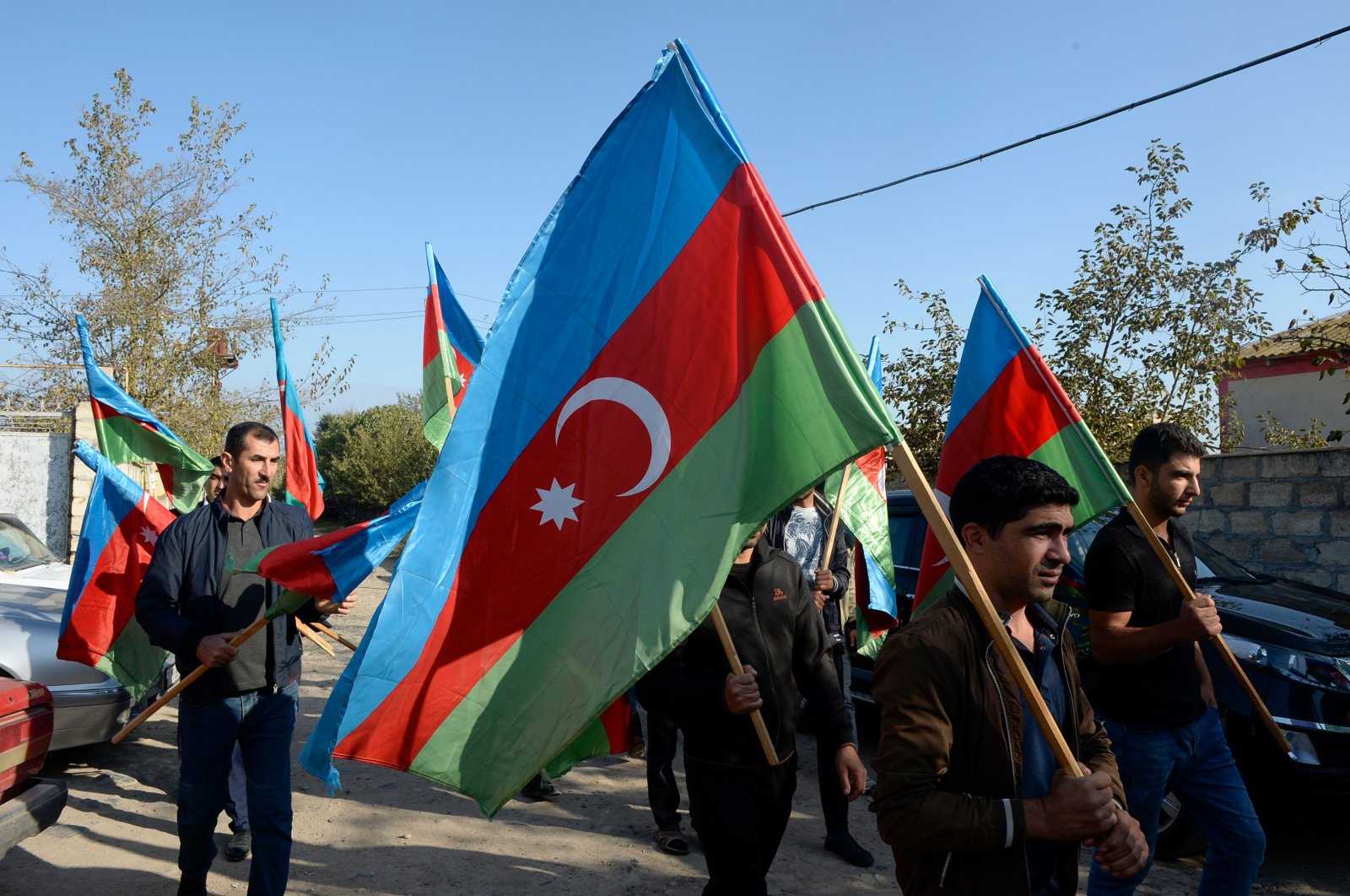 Men walk with Azerbaijani flags during a funeral procession of an Azeri serviceman who was to have been killed in fighting with Armenian separatists, Azerbaijan's Beylagan district, Sept. 30, 2020. (AFP)
by DAILY SABAH WITH AGENCIES
Sep 30, 2020 1:19 pm

Baku has said it is determined to rescue the Nagorno-Karabakh region from Armenian occupation by eliminating troops and military vehicles. However, Yerevan has not stepped back as it denied offers of mediation by holding on to an aggressive approach

The conflict in the occupied Nagorno-Karabakh continues to mount as Azerbaijan advances against the Armenian positions, inflicting thousands of casualties along the way. Despite the heavy blow, however, Armenia continues to stick to its occupying strategy in the region and overlook offers for peace talks.

In a statement, Azerbaijan's Defense Ministry said Tuesday that at least 2,300 Armenian soldiers were killed and wounded since Sept. 27, when the war broke out.

It added that Armenia targeted Azerbaijan's Tartar region with artillery fire in the early hours. Though there were structural Infrastructure damages, no civilians casualties have been reported, it said.

The Armenian military, on the other hand, targeted the Asagi Agcakend village in Azerbaijan's Goranboy district with artillery fire, which is being "effectively responded" by Azerbaijan, according to the ministry.

Later on Wednesday, a statement came from Azerbaijan’s foreign ministry, stating that the country is "determined" to fight until Armenian troops leave the occupied regions.

Meanwhile, two Armenian Sukhoi Su-25 jets, which were claimed to have been downed by Turkish F-16s, crashed into mountains and were destroyed, Azerbaijani presidential aide Hikmet Hajiyev confirmed Wednesday.

Armenia's Ministry of Defense claimed Tuesday that a Turkish warplane taking off from Azerbaijan's Ganja province shot down a Su-25 warplane over its territory.

The claims were immediately denied by the Turkish and Azerbaijani authorities. Communications Director Fahrettin Altun told Bloomberg late Tuesday that the allegations were false.

Later in the day, the Azerbaijani Ministry of Defense also denied the allegations.

The ministry said in a statement that the allegation is "yet another fantasy of the Armenian military propaganda machine."

Ankara will 'always' be there for Baku

Shortly after Armenia began its assault, Ankara reiterated its support for Azerbaijan, with officials, mainstream political parties, and the Turkish Foreign Ministry declaring unwavering backing for its brotherly Turkic nation.

Azerbaijan is struggling against occupiers of its lands and is capable of defending its rights in the Armenian-occupied Nagorno-Karabakh, Turkish Foreign Minister Mevlüt Çavuşoğlu said Wednesday, as he reiterated Turkey's support for Baku.

"Turkey will support Azerbaijan in every way possible. But so far, their own forces have been more than enough in their fight against illegal Armenian occupation," Çavuşoğlu told Anadolu Agency's (AA) Editor's Desk.

"They should call on Armenia to retreat from the occupied territories that belong to Azerbaijan," he said.

"Where on earth are occupiers and the ones whose land is being occupied treated equally?" Çavuşoğlu said, noting that Armenia has dared to attack Azerbaijan because other countries have been supporting it.

The foreign minister highlighted the deadlock over the Nagorno-Karabakh problem, saying that no concrete steps have been taken in the past three decades to put an end to the conflict. He noted that treating Azerbaijan like it is attacking Armenia is unreasonable because it is fighting against occupiers in its own lands.
Turkey’s ongoing support was praised by Azerbaijan as the country's leader Ilham Aliyev expressed his gratitude to the country on Wednesday.
“Only Pakistan, Afghanistan and Turkey have supported us,” he said.

All these developments caused a wave of concern in the international community and calls for a cease-fire have dominated the diplomacy scene since Sunday.

The U.N. Security Council on Tuesday threw its weight behind Secretary-General Antonio Guterres' call to end fighting in the Nagorno-Karabakh region.

The council members "expressed concern over reports of large-scale military actions along the Line of Contact in the Nagorno-Karabakh conflict zone," in a statement.

"They strongly condemn the use of force and regret the loss of life and the toll on the civilian population," they added. "Security Council members expressed their full support for the central role of the (Organization for Security and Co-operation in Europe) OSCE Minsk Group Co-Chairs and urge the sides to work closely with them for an urgent resumption of dialogue without preconditions."

The European Court of Human Rights (ECtHR) on Wednesday also called on both Azerbaijan and Armenia to ensure civilians remain safe as fighting continues over the occupied Nagorno-Karabakh region.

"The current situation gives rise to a risk of serious violations" of the ECtHR, which both countries ratified in 2002, the court said.

Armenia sought interim measures from the court after the deadly clashes broke out Sunday.

"The court called upon both Azerbaijan and Armenia to refrain from taking any measures, in particular military action, which might entail breaches of the Convention rights of the civilian population, including putting their life and health at risk," it said.

It also specifically warned military forces against the use of torture or inhumane treatment against captives and urged them to indicate the steps being taken to prevent it.

No steps toward truce

However, despite the calls for a truce, no progress has been made so far to bring peace back to the region.

Armenia on Wednesday rejected Russian offers to mediate peace talks with arch-rival Azerbaijan as fighting raged for a fourth day over the occupied region of Nagorno-Karabakh.

"It isn't very appropriate to speak of a summit between Armenia, Azerbaijan and Russia at a time of intensive hostilities," Armenia's Prime Minister Nikol Pashinyan told Russia's Interfax news agency.

"A suitable atmosphere and conditions are needed for negotiations," he added.

Pashinyan further said he and Russian President Vladimir Putin had not discussed the possibility of Russian military intervention in the conflict.

The OSCE Minsk Group – co-chaired by France, Russia and the United States – was formed in 1992 to find a peaceful solution to the conflict, but to no avail. A cease-fire, however, was agreed upon in 1994. France, Russia and NATO, among others, have urged an immediate halt to clashes in the occupied region.

Meanwhile, despite being a part of the Minsk group with a so-called intention to find a solution to the conflict, France openly declared its support to Armenia, as French President Emmanuel Macron Wednesday condemned what he called Turkey's "reckless and dangerous" statements backing Azerbaijan.

"France remains extremely concerned about the bellicose comments that Turkey made in the last hours, which essentially remove any inhibitions from Azerbaijan in what would be a reconquest of northern Karabakh. That we will not accept," Macron told reporters in Latvia's capital Riga during a visit to the Baltic EU state.

He also appeared to voice support for Yerevan, "I say to Armenia and to the Armenians, France will play its role."

Relations between Turkey and France have deteriorated over the Eastern Mediterranean, but the two allies disagree on other major issues including the conflicts in Syria and Libya.

The two countries are also on opposing sides in Libya, where Ankara has backed the U.N.-recognized Government of National Accord (GNA) in Tripoli against a 2019 offensive by putschist Gen. Khalifa Haftar. France is suspected of supporting Haftar, but officially insists it is neutral in the conflict.

Turkish officials have decried France's interference in the Eastern Mediterranean dispute, given it has no territory in the region. Commentators have argued that Macron is trying to distract the public from his political failures at home.

Ankara and Paris also previously traded barbs after French officials in 2018 met with the leaders of the PKK terrorist group’s Syrian branch, the YPG.