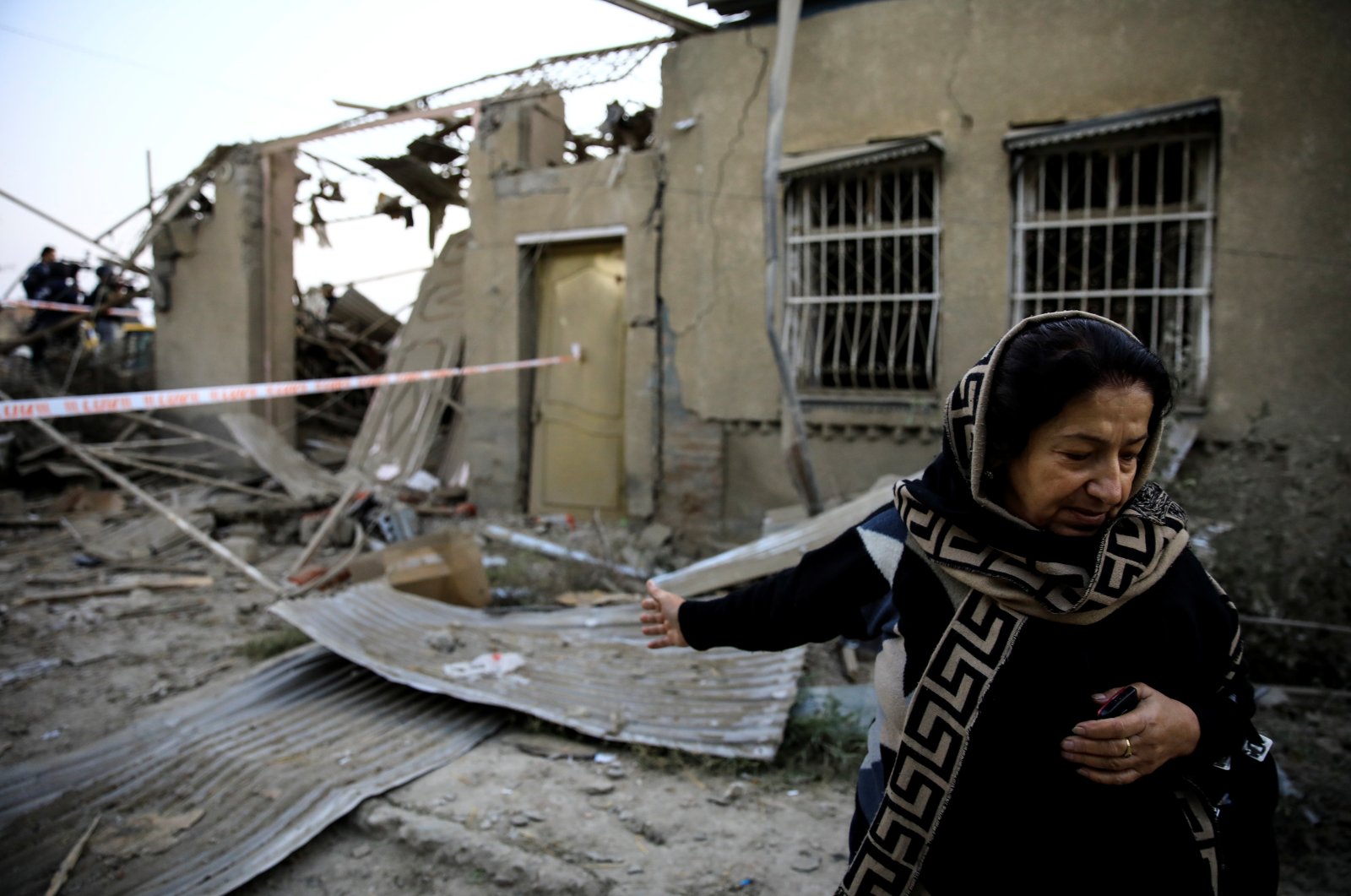 Hicran Quliyeva reacts as she stands in front of her house at a blast site hit by a rocket during the fighting over the illegally occupied region of Nagorno-Karabakh, in the city of Ganja, Azerbaijan, Oct. 17, 2020. (Reuters Photo)
by DAILY SABAH WITH AGENCIES Oct 18, 2020 9:39 am
RECOMMENDED

Azerbaijan on Sunday said Armenian separatist forces are violating a cease-fire over the illegally occupied Nagorno-Karabakh region, just hours after it was due to have taken effect at midnight.

"Armenian forces grossly violated another agreement," the defense ministry in Baku said in a statement, adding that they fired artillery and mortars in various directions and of launching early morning attacks along the frontline.

"During the night, the enemy fired at the vicinity of the city of Jabrayil, as well as the villages of this region liberated from occupation and located along the Araz River, using mortars and artillery," the ministry said.

Later, Hikmet Hajiyev, assistant of the president of the Republic of Azerbaijan, said in a Twitter statement: "In blatant violation of humanitarian truce armed forces of Armenia used their fighter aircraft to bomb the positions of Azerbaijan's armed forces. How we can trust the Armenian side?"

The new cease-fire deal was announced after one of the deadliest attacks on civilians so far on Saturday, when an Armenian missile strike hit a residential area of Azerbaijan's second-largest city, Ganja, killing at least 13 people, including four women and three minors, and injuring nearly 50 others.

Azerbaijani officials said the Soviet-made Scud missile destroyed or damaged about 20 residential buildings in Ganja overnight with emergency workers spending hours searching the rubble for victims and survivors. Scud missiles date back to the 1960s and carry a large load of explosives but are known for their lack of precision.

It was Armenia's second assault in less than a week on Ganja, an area far from the front line with a population of half a million.

In Ganja, rows of houses turned to rubble by the strike, which shattered walls and ripped roofs off of buildings in the surrounding streets.

"We were sleeping and suddenly we heard the blast. The door, glass, everything shattered over us," said Durdana Mammadova, 69, who was standing on the street at daybreak because her house was destroyed.

In a televised address to the nation, Azerbaijani President Ilham Aliyev denounced the missile strike as a war crime and warned the leadership of Armenia that it will have to take responsibility.

“Azerbaijan will give its response, and it will do so exclusively on the battlefield,” Aliyev said.

Speaking at an opening ceremony in southeastern Şırnak province, President Recep Tayyip Erdoğan on Sunday said that the co-chairs of the Organization for Security and Co-operation in Europe (OSCE) Minsk group – the U.S., Russia and France – support Armenia and provide weapons.

He also reiterated Turkey’s support for Azerbaijan’s “legitimate struggle” to liberate its territories from the Armenian occupation.

"Silence in the face of savagery means complicity in murder. Those who do not claim their share of humanity will be held accountable for their crimes," Foreign Minister Mevlüt Çavuşoğlu said on Twitter.

In Sunday's statement, the Azerbaijani Defense Ministry said that the Azerbaijani army units took "adequate retaliatory measures," adding that there were no losses among military personnel.

"The troops of the Azerbaijani army are taking relevant actions at advantageous frontiers, important high grounds and positions along the entire front," it added.

On the other hand, Armenian military officials on Sunday reported shelling and missile strikes by Azerbaijani forces carried out in the conflict zone overnight. In the morning, “the enemy launched an attack in the southern direction" of the conflict zone resulting in "casualties and wounded on both sides," Armenian Defense Ministry spokesperson Shushan Stepanian said.

In a statement, the ministry said on Sunday that the Su-25 attack aircraft was trying to launch airstrikes on Azerbaijani positions in the Jabrayil region when it was shot down, like its predecessor on Saturday.

The Azerbaijani military declared Saturday that they downed another Armenian Su-25 jet, a claim quickly dismissed by Armenia’s Defense Ministry.

Aliyev on Saturday announced that Azerbaijani forces have taken the town of Fuzuli and seven surrounding villages, gaining a “strategic edge.” Fuzuli is one of the seven Azerbaijani regions outside Nagorno-Karabakh that was seized by the Armenian forces during the war in the early 1990s.

A fresh humanitarian cease-fire was reached between Baku and Yerevan following the previous Oct. 10 humanitarian cease-fire – intended to allow for the exchange of prisoners and the recovery of dead bodies – was breached hours later as Armenia launched missile attacks on Azerbaijan's city of Ganja, killing 10 people and injuring 35.

The new truce was announced following a phone call between Russian Foreign Minister Sergei Lavrov and his Armenian and Azerbaijani counterparts that called on both sides to observe the truce that he mediated a week ago. The decision was in line with the previous statements of the presidents of France, Russia and the U.S., the co-chairs of the Minsk Group, which was set up in 1992 by the OSCE to resolve the conflict but to no avail. A cease-fire, however, was agreed upon in 1994.

The two sides have described the agreement as a "humanitarian truce" to allow for the exchange of prisoners and bodies.

Several hours after the truce came at midnight, both sides started accusing each other of breaching the agreement.

Later on Sunday, Armenia and Azerbaijan reiterated their commitments to the cease-fire in statements issued by their foreign ministries, blaming the breaches on each other.

Azerbaijan “reserves its right to take countermeasures to protect its civilians and positions,” the country's Foreign Ministry said.

Yerevan “will continue to undertake all necessary measures to impose peace on Azerbaijan and establish a cease-fire regime which will entail precise and effective mechanisms for maintaining and verifying it," the Armenian Foreign Ministry said.

Since clashes erupted between the two countries on Sept. 27 over Nagorno-Karabakh – Azerbaijani territory occupied by Armenia for nearly 30 years – Armenia has continued its attacks on civilians and Azerbaijani forces.

World powers, including Russia, France and the U.S., have called for the cessation of hostilities. Turkey, meanwhile, has supported Baku's right to self-defense and demanded the withdrawal of Armenia's occupying forces.