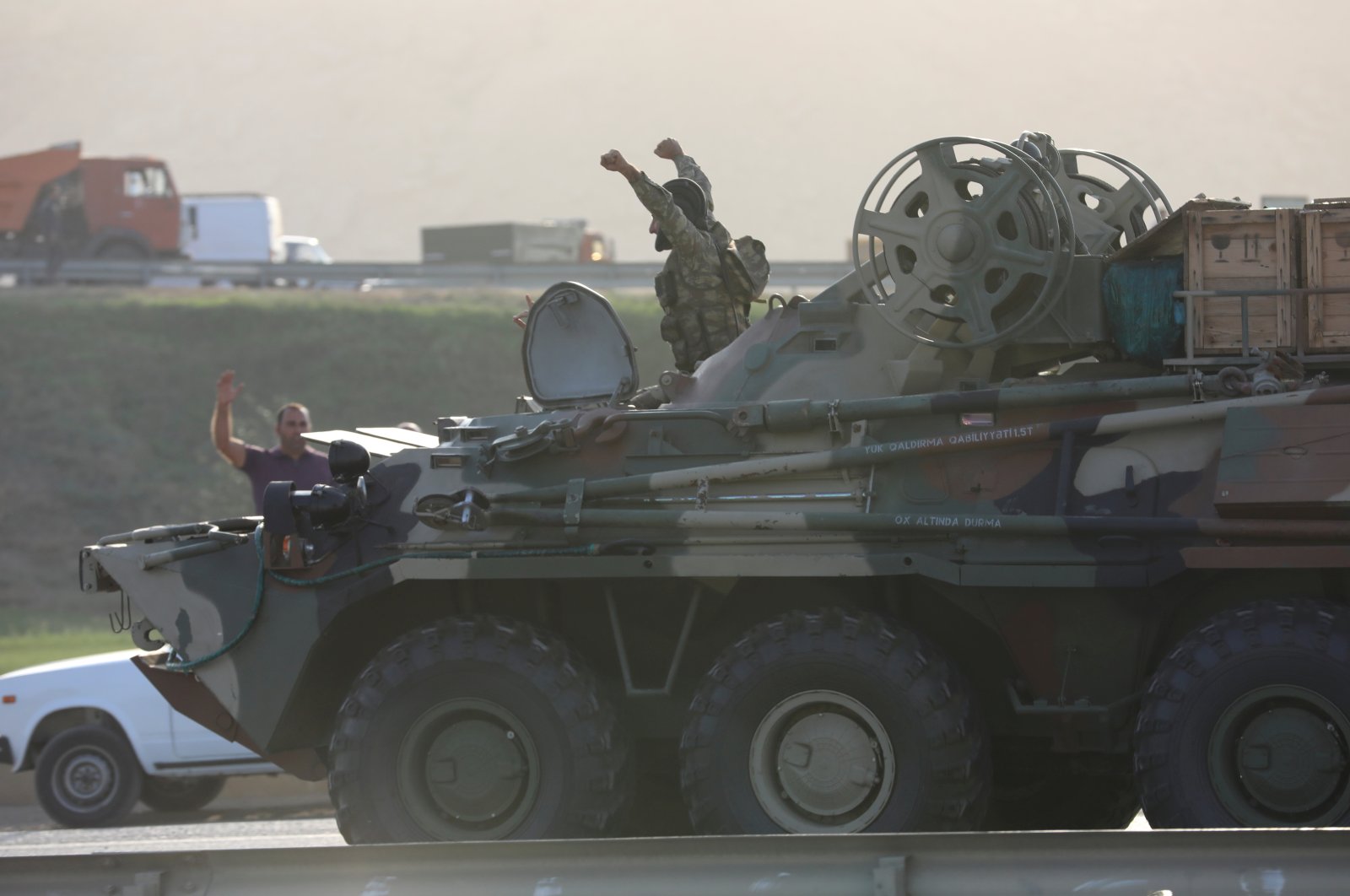 An Azerbaijani service member drives an armored carrier and greets people, who gather on the roadside in Baku, Azerbaijan, Sept. 27, 2020. (Reuters Photo)
by DAILY SABAH WITH AGENCIES Sep 28, 2020 4:08 pm
RECOMMENDED

Deadly clashes between Azerbaijan and Armenia continued for a second day in the occupied Nagorno-Karabakh region with Azerbaijani troops speedily advancing by retaking crucial regions. Meanwhile, hundreds of Armenian troops have been killed during the fighting, according to Azerbaijani sources.

Azerbaijan’s military launched a second wave of operations on the front lines of Armenian-occupied Nagorno-Karabakh, according to reports Monday.

Targeting more than 400 geographic points, Azerbaijani troops continued their attack with an arsenal of drones, warplanes, missiles and artillery.

As a result, 18 Azerbaijani people were killed in two days, including children, Azerbaijani sources said, adding that Armenian casualties are already in the hundreds.

Armenian occupation leader Arayik Harutyunyan also confirmed the advancement of Azerbaijan on Sunday and said that they lost some positions in Nagorno-Karabakh to Azerbaijan's army amid renewed clashes. He also said there were dead and wounded both civilians and military personnel.

Azerbaijan also said it has captured a strategic mountain in Karabakh that helps control transport communications between Yerevan and the enclave. The Azerbaijani Armed Forces undertook counter-offensive measures under the nation's right to self-defense and in full compliance with international humanitarian law in order to thwart further military aggression by Armenia and provide security to densely populated civilian residential areas, it said.

Calling the illegal presence of the Armenian army in occupied Nagorno-Karabakh and surrounding regions of Azerbaijan a serious threat to regional peace and security, Azerbaijan called on the international community to "strongly" condemn Armenia's policy of aggression and provocative activities against Azerbaijan.

Azerbaijani President Ilham Aliyev ordered martial law to be imposed in some regions of the country and called for a curfew in major cities on Monday, following a parliamentary decision to military mobilization on Sunday. In a televised address to the nation, Aliyev said that “there are losses among the Azerbaijani forces and the civilian population as a result of the Armenian bombardment,” but didn't give further details. He also claimed that “many units of the enemy’s military equipment have been destroyed.”

Meanwhile, as the tension escalated, Azerbaijan canceled all international flights except for those with Turkey, reports said Monday.

On Sunday, Ukrainian Airlines had announced that it has canceled all flights to the Armenian capital Yerevan.

"We assessed possible risks and decided that the flight to Yerevan is impossible until clarification of our further actions by the aviation authorities of Ukraine and the official position of Baku and Yerevan on ensuring the safety of the aviation space over Azerbaijan and Armenia," Yevheniy Dykhne, the CEO of Ukraine International Airlines said on Twitter.

A decadeslong friend of Azerbaijan, Turkey has expressed its support for the country in its fight against Armenia multiple times within the past two days, fortifying already well-established ties.

Azerbaijan was forced to take matters into its own hands in response to flagrant Armenian attacks, President Recep Tayyip Erdoğan said on Monday.

Speaking at the International Maritime Law and Eastern Mediterranean Symposium, Erdoğan said Azerbaijan has been the victim of violence for the past three decades, while the international community has stood by as Armenia kept attacking.

“I condemn Armenia once again for attacking Azerbaijani lands. It is about time to end the crisis that started with the occupation of Nagorno-Karabakh,” Erdoğan said. He noted that peace will be restored in the region if Armenia halts attacks against Azerbaijan and leaves the occupied Nagorno-Karabakh.

The president said recent developments have given all countries in the region an opportunity to utilize realistic and fair solution methods and that Turkey hopes they make the best use of this opportunity.

Criticizing the Organization for Security and Co-operation in Europe (OSCE) Minsk Group trio – which includes the U.S., Russia and France – for failing to find a solution to the three-decades-old problem, Erdoğan said their initiative has been ineffective.

“They have almost done everything possible not to solve the problem, and now they give advice and occasionally threaten,” Erdoğan said, adding that even though they question the Turkish military’s presence and support for Azerbaijan, they have delivered thousands of trucks full of weapons to Syria.

Highlighting that the international community has chosen to remain silent even though they recognize the fact that Nagorno-Karabakh is occupied by Armenia, Erdoğan said no country holds Yerevan accountable for its crime, which has displaced over a million people in the area.

While Turkey pledged support to Azerbaijan, the international community mostly reacted against the recent eruption of fighting, as the U.S. and others urged both sides to halt fighting, while Iran said it could act as a mediator between them.

The United States on Sunday joined global calls for Armenia and Azerbaijan to end the deadly clashes. The U.S. State Department said it had contacted the two countries "to urge both sides to cease hostilities immediately, to use the existing direct communication links between them to avoid further escalation, and to avoid unhelpful rhetoric and actions."

Russia, on the other hand, on Monday called on Armenia and Azerbaijan to exercise restraint and give up military methods of conducting affairs.

Speaking to reporters, Kremlin spokesman Dmitry Peskov said the escalation of the conflict in Nagorno-Karabakh is the "most serious concern."

Russia considers it "inappropriate" to draw a conclusion on who is right and who is guilty, and uses its good relations with Armenia and Azerbaijan in a bid to de-escalate the situation, Peskov said.

Russian Foreign Minister Sergey Lavrov has been in contact with his Armenian and Azerbaijani counterparts in order to promote peacemaking efforts, he added.

The Kremlin spokesman said that President Vladimir Putin held a phone talk with Armenian Prime Minister Nikol Pashinyan at the latter's request on Sunday and that he will talk to Azerbaijani President Ilham Aliyev if necessary.

Moscow is also "in full contact" with Ankara on the issue, the spokesman added.

"At the moment, we call on all parties, especially the parties to the conflict, to exercise maximum restraint, to abandon military methods of conducting affairs, and also to refrain from any steps that may provoke further undesirable aggravation of the situation," he said.

Albanian Prime Minister Edi Rama, chairman of the Organization for Security and Cooperation in Europe, also called on the sides to stop fighting. The long-unsuccessful negotiations for resolving the territory's status has been conducted under OSCE auspices.

Foreign Minister Javad Zarif of Iran, which borders both Azerbaijan and Armenia, also said “We call for an immediate end to hostilities and urge dialogue to resolve differences. Our neighbors are our priority and we are ready to provide good offices to enable talks.” Iran offered to act as a mediator in the renewed conflict between the two neighboring states of Armenia and Azerbaijan over the disputed region of Nagorno-Karabakh. Iranian Foreign Ministry spokesman Saeed Khatibzadeh said Tehran was following the violence in the south Caucasus with great concern, news agency ISNA reported.

"We call on both sides to exercise restraint, end the conflict immediately and resume negotiations," he said, while offering Tehran's support in working towards a resolution. Tehran maintains good diplomatic relations with both states and has mediated in the conflict over Nagorno-Karabakh in the past.

Ukraine’s Foreign Ministry, on the other hand, expressed deep concern about the escalation of conflict between the two countries. “We examine circumstances that led to (the) escalation, call on the parties to return to the dialogue & settle the conflict by peaceful means. Our thoughts are with the relatives of victims," the ministry said on Twitter.

Georgian President Salome Zourabichvili also called for peace between the two countries. "Very concerned with the resumption of hostilities between Armenia and Azerbaijan. We call for peace. Stability and peace in our region must be our common cause," she said on her Twitter account.

Similarly, U.N. Secretary-General Antonio Guterres also said he was "extremely concerned over the fresh resumption of hostilities" between Armenia and Azerbaijan in the region.

"The Secretary-General strongly calls on the sides to immediately stop fighting, de-escalate tensions and return to meaningful negotiations without delay," Guterres's spokesman said in a statement. Guterres "condemns the use of force and regrets the loss of life and the toll on the civilian population," the statement said, adding that the secretary-general would speak to the president of Azerbaijan and the prime minister of Armenia.

France, Germany, Italy and the European Union also urged an immediate ceasefire, while Pope Francis prayed for peace. European Union and Council of Europe leaders were among the first to call on Armenia and Azerbaijan to immediately halt military action.

The EU warned Monday regional powers not to interfere in fighting and condemned a "serious escalation" that threatens regional stability.

Foreign policy spokesperson Peter Stano said Brussels cannot confirm reports of outside forces joining the conflict, but added: "No external interference in this conflict is acceptable."