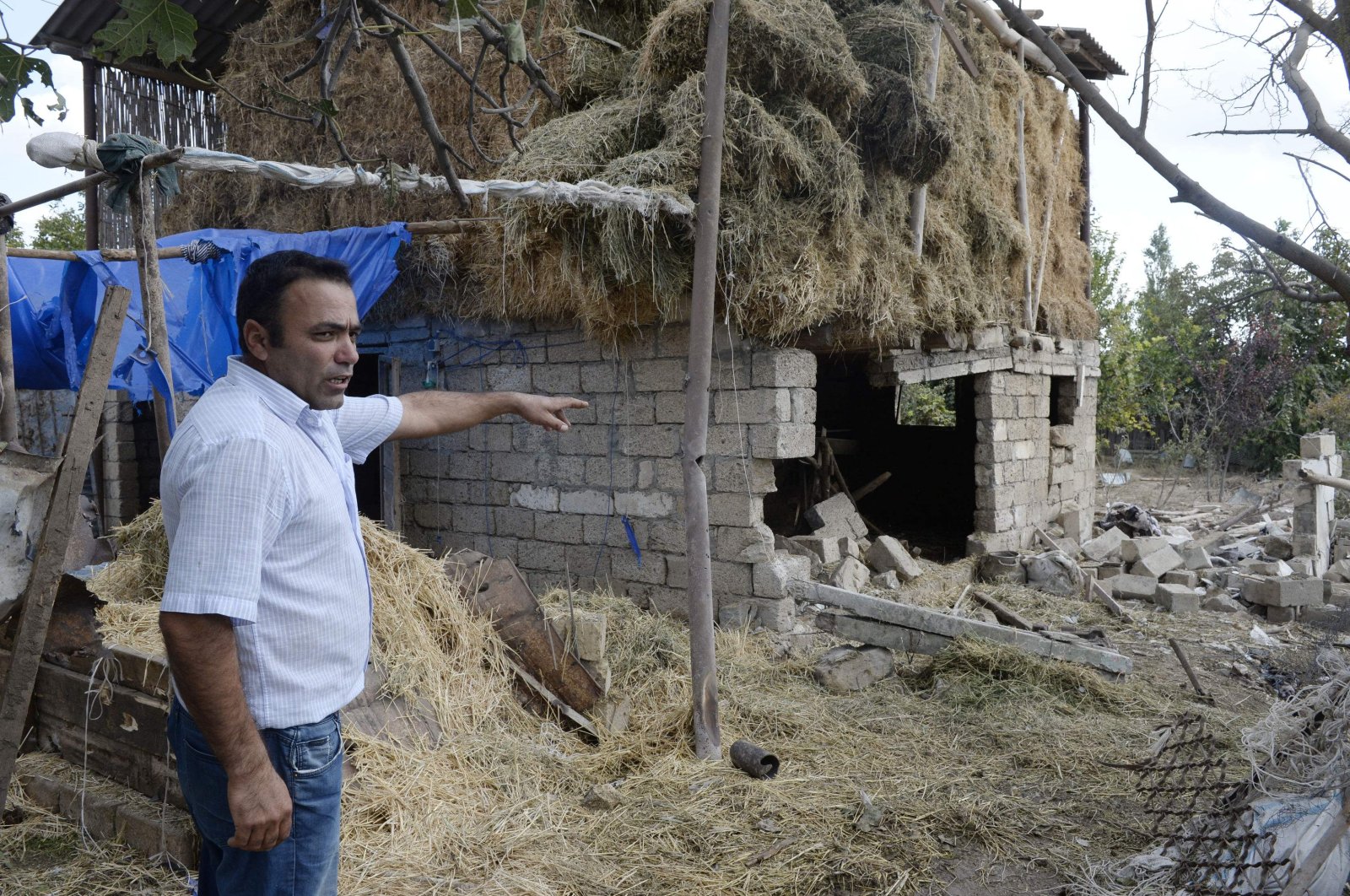 A man points to a house reportedly damaged by the recent fighting between Armenia and Azerbaijan over the Armenian occupied Nagorno-Karabakh region, in the settlement of Zorocuq in Azerbaijan's Fuzuli district, Sept. 30, 2020. (AFP Photo)
by DAILY SABAH WITH AGENCIES
Oct 01, 2020 1:19 pm

Fighting and heavy shelling between Armenian and Azerbaijani forces persisted Thursday despite fresh calls from world leaders for an end to days of fighting over the Armenian occupied Nagorno-Karabakh region.

The rival Caucasus nations have been locked in a bitter stalemate over the Nagorno-Karabakh region since the collapse of the Soviet Union. The fiercest clashes between Armenian and Azerbaijani forces in years over the occupied region ignited Sunday and confirmed deaths neared 130 as fighting spilled over into the fifth day.

Azerbaijan's defense ministry said Thursday its forces had carried out "crushing artillery strikes against Armenian forces' positions in the occupied territories" throughout the night.

In a statement, the Azerbaijani Defense Ministry said the Armenian soldiers were either killed or wounded in counterattacks launched to liberate occupied Azerbaijani territories.

It also said some 200 tanks and armored vehicles, at least 230 artillery and missile systems, around 30 air defense systems, six command and observation areas, five ammunition depots, around 50 anti-tank guns, 110 cars and a Russian S-300 missile system were destroyed between Sept. 27 and Sept. 30.

An Armenian battalion serving under the first army command deployed in the village of Tonashen in Tartar district abandoned its position and fled after suffering heavy losses, the ministry said.

"Due to the unsuitability and poor quality of the enemy's military equipment, three of the missiles fired did not explode," said the statement.

Infrastructure suffered damage in the region, while no civilians were injured in the attacks, it said.

The ministry said in a separate statement that the Azerbaijani Armed Forces captured the battle flag of an assault battalion of the Armenian Army.

"The battle flag and documents of the 193rd separate assault battalion, which arrived to support the sixth defeated mountain rifle regiment of the Armenian Army, have today been intercepted during the fighting in the Aghdara direction," Azerbaijan's Ministry of Defense told Azertac, the country's state news agency.

The Azerbaijani army hit the command area of the 41st regiment of the 18th motorized division of the Armed Forces of Armenia.

"The command of the Armenian forces in this region was completely destroyed. There are many dead and wounded among military personnel. Regiment command has asked for help to evacuate the wounded," Azerbaijan's Defense Ministry added.

It added that the fourth battalion of Armenian forces moving toward Fuzuli district was targeted by intense shelling.

As a result of the attacks, "the enemy suffered heavy losses in terms of manpower and military equipment," it said.

Azerbaijan's parliament declared a state of war Sunday in some cities and areas following Armenia's border violations and attacks in the occupied Nagorno-Karabakh region.

Since Armenia's attacks Sunday, tensions have continued to escalate, with Turkey firmly standing with Azerbaijan.

The five-day death toll in Azerbaijan rose to 16 on Thursday amid continued Armenian attacks on civilian settlements, officials said.

Azerbaijani prosecutors said in a statement that another civilian had succumbed to their wounds, adding that the number of those injured by Armenian forces in the city of Tartar had risen to 55.

On the other hand, separatist officials in Karabakh described the overnight situation along the front line as "tense" and said both sides exchanged artillery fire.

"The enemy attempted to regroup its troops, but Armenian forces suppressed all such attempts."

The two sides claim to have inflicted heavy losses on opposing forces and ignored repeated calls from international leaders to halt fighting.

The presidents of Russia, the United States and France most recently called Thursday for a cease-fire in the region, urging Armenia and Azerbaijan to commit to talks without delay.

"We call for an immediate cessation of hostilities between the relevant military forces," French President Emmanuel Macron, Russian President Vladimir Putin and U.S. President Donald Trump said in a statement released by the Elysee Palace.

"We also call on the leaders of Armenia and Azerbaijan to commit without delay to resuming substantive negotiations," said the leaders, whose countries are the co-chairs of the Minsk Group that have sought a solution to the conflict since the 1990s. Formed to find a peaceful solution to the conflict but to no avail, the Minsk Group was set up in 1992 by the Organization for Security and Co-operation in Europe (OSCE).

Putin and Macron, in a telephone conversation late Wednesday, also issued another call for a complete halt to fighting in Nagorno-Karabakh and said they were ready to intensify diplomatic efforts to help resolve the conflict.

Putin and Macron expressed concern over the growing tensions in the region, the Kremlin said in a written statement.

The statement added that the two leaders called on the opposing sides to implement an immediate and full cease-fire, de-escalate tensions and show maximum restraint.

They also underlined that the conflict should be resolved by diplomatic means, it said.

The EU and NATO, among others, have urged an immediate halt to clashes along the frontier.

Four U.N. Security Council (UNSC) and two U.N. General Assembly (UNGA) resolutions as well as many international organizations have demanded the withdrawal of the occupying forces.

Comparing the capacities of the two rival countries based on data by various sources including the U.N., World Bank, Armstat and CIA World Factbook, Azerbaijan has a population of nearly 10.14 million while Armenia has nearly 2.96 million. While the two countries have a similar level of economic welfare based on the gross domestic product (GDP) per capita, Azerbaijan’s total GDP of $48 billion is nearly three times higher than Armenia’s GDP of $13.7 billion. While Azerbaijan’s military spending per year is nearly $1.79 billion, Armenia’s military spending per year is $644 million.