Azerbaijan: Armenian Army feeble in clashes, retreats from some fronts 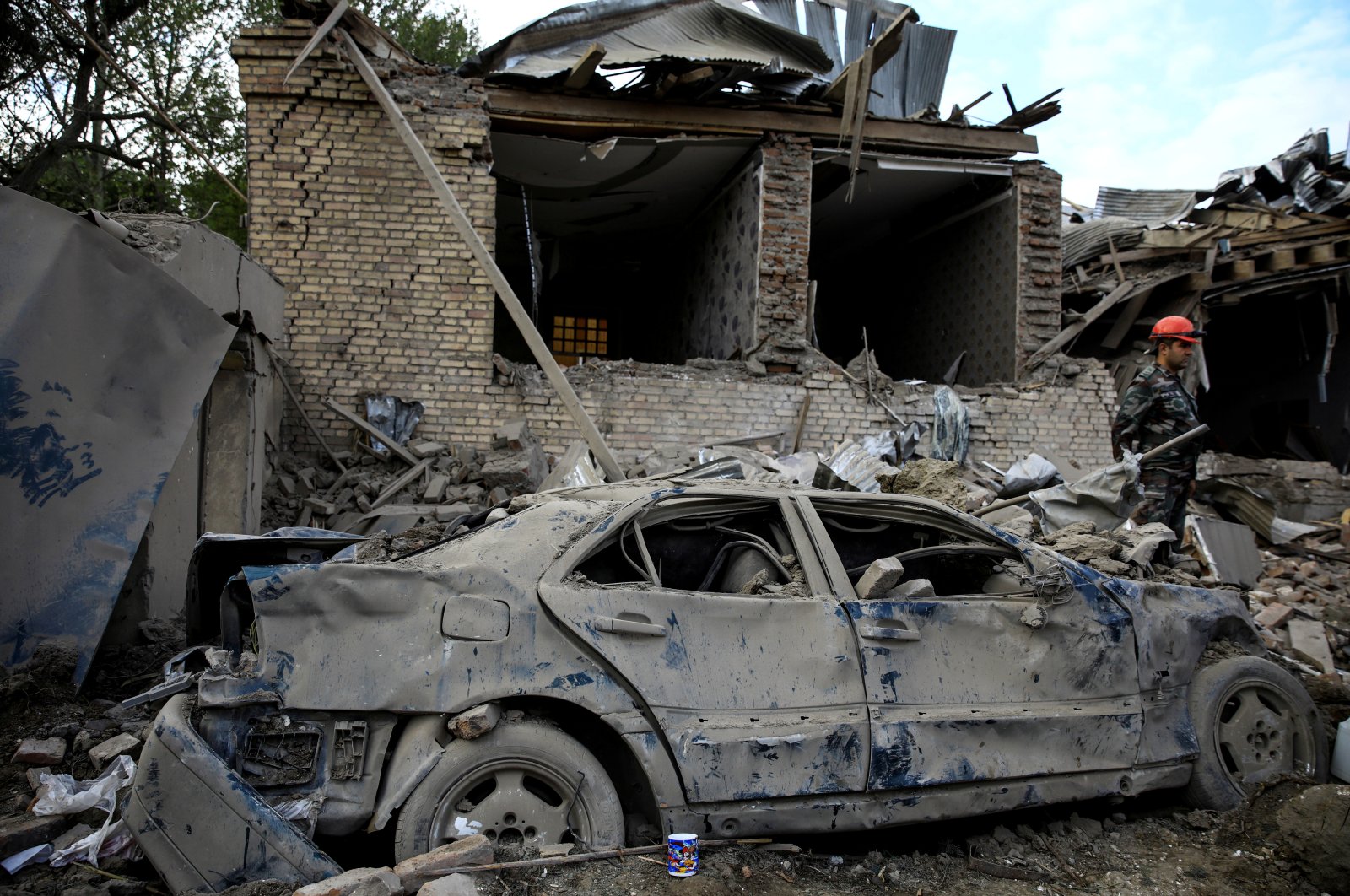 A damaged car is seen at the blast site hit by a rocket during the fighting over the breakaway region of Nagorno-Karabakh, in the city of Ganja, Azerbaijan, Oct. 11, 2020. (REUTERS)
by DAILY SABAH WITH AGENCIES Oct 15, 2020 11:35 am
RECOMMENDED

After being worn down in the clashes with the Azerbaijani army, a number of Armenian troops are starting to retreat from the occupied Nagorno-Karabakh conflict zone, Azerbaijan announced on Thursday.

Azerbaijan's Defense Ministry stated the clashes are ongoing in Agdam, Aghdara, Tartar, Fuzuli and Jabrayil, but following a nightlong battle, the Armenian troops had no choice but to withdraw from certain fronts following Azerbaijan's strong response to their attack.

Azerbaijan also stated that during the clashes, the Armenian Army lost two T-72 tanks, a Tor-M2KM missile, four BM-21 grad missile, a D-20, a D-30 and two D-1 howitzers. A couple of Armenian drones and military vehicles were also destroyed, the ministry added.

The ministry shared that the Armenian Army is suffering from a shortage of fuel on top of the heavy losses it has already incurred.

Another statement came from the Azerbaijani public prosecutors' office on Thursday, which reported that 43 Azerbaijani civilians have been killed to date while 218 have been injured in the Armenian attacks.

In addition to the civilian casualties, 1,592 houses, 79 apartments and 290 public buildings were heavily damaged in the Armenian attacks.

A cease-fire between the warring parties was agreed on over a 10-hour discussion in Moscow and was set to take effect at noon on Oct. 10. The talks between the foreign ministers of Armenia and Azerbaijan were held upon the invitation of Russian President Vladimir Putin, who brokered the cease-fire in a series of calls with President Ilham Aliyev of Azerbaijan and Armenia's Prime Minister Nikol Pashinian.

However, the freshly-inked cease-fire did not last a day, as Yerevan launched an attack on Azerbaijan's second-largest city, Ganja, on Sunday.

Although Yerevan immediately denied the attack, footage from the area confirmed Azerbaijani statements.

The Minsk Group – co-chaired by France, Russia and the United States – was set up in 1992 by the Organization for Security and Co-operation in Europe (OSCE) to find a peaceful solution to the conflict but to no avail. A cease-fire, however, was agreed upon in 1994.

Many world powers, including Russia, France and the U.S., have urged a new cease-fire. Turkey, meanwhile, has supported Baku's right to self-defense and demanded the withdrawal of Armenia's occupying forces

While clashes continue despite the cease-fire, Turkey still urges the international community to acknowledge the rightful cause of Azerbaijan, pointing at Armenia's unlawful acts in the region.

Pointing to Armenia's 30-year-long occupation of the Azerbaijani territories, Çavuşoğlu noted that the international community prefers to remain silent on the unlawful matter by "putting the victim and the cruel in the same basket."

The foreign minister added that Turkey will continue to support Azerbaijan and stands in solidarity with the country in its fight with Armenia.

"We will continue to support Azerbaijan in all areas, including the fight against disinformation, as it strives to end Armenia’s illegal occupation in Nagorno-Karabakh," he said.

Hajiyev also announced the talk on Twitter, addressing Altun as his "dear friend."

"We reviewed our joint actions to withstand black propaganda conducted against our countries," he said.