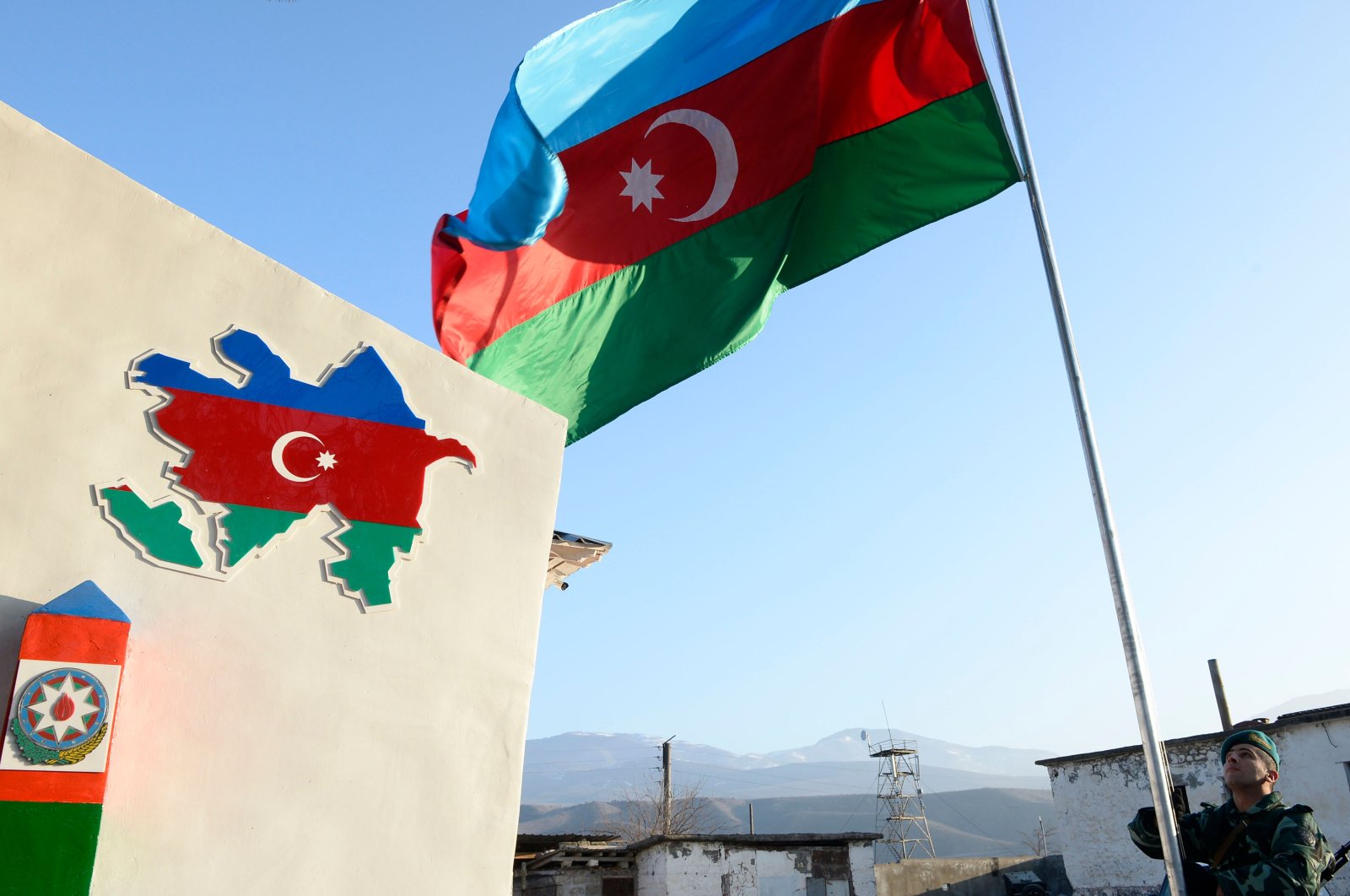 An Azerbaijani border guard raises the national flag during the opening ceremony of the frontier post in the village of Zangilan, Azerbaijan, Jan. 5, 2021. (AFP Photo)
by DAILY SABAH WITH AA Jan 07, 2021 1:12 pm
RECOMMENDED

The one-sided and partial attitude of Russian military elements deployed in the Karabakh region to monitor a cease-fire deal signed in November in favor of the Armenian side has raised eyebrows in Azerbaijan.

Deployed to the region as part of the Russia-brokered cease-fire deal signed on Nov. 10, Russian troops sometimes exhibit a pro-Armenia attitude instead of taking the required neutral stance for the implementation of the peace agreement, Azerbaijani officials say.

Speaking to Anadolu Agency (AA), Azerbaijan’s state customs academy department chair, Araz Aslanlı, said Thursday that some discourse and practices of Russian elements do not contribute to the permanent solution of the Nagorno-Karabakh issue and cause doubts in Azerbaijan and Turkey about Russia’s good intentions.

Aslanlı said the long-awaited solution for the Karabakh issue could have strained Turkey-Russia relations. "However, this risk has been largely eliminated following the 44-day war and since cooperation possibilities between the two countries have increased. It is important to create multidimensional cooperation conditions in the region. For the stable future of the region, Russian elements should act with the awareness of they are taking part in Azerbaijani territory," he said.

Caucasus International Relations and Strategic Studies Center (QAFSAM) Deputy Chair Nazım Cafersoy also told AA that Russian elements in the region are causing the continuation of the illegal military forces’ presence in the region rather than providing peace between Armenians and Azerbaijanis.

Cafersoy said it is wrong for Russian elements to recognize the separatist forces in the region as a legitimate actor, adding: “This situation that the so-called Armenian administration tries to use for their own interests is unacceptable. Russia does not give a good test in this process. Russian elements should exert effort for the implementation of the cease-fire in the region in line with their job description and should avoid any action against Azerbaijan’s territorial integrity.”

Rustem Muradov, the commander of the Russian troops in the region, was pictured with senior figures of the separatist Armenian forces. Azerbaijanis also reacted against the presence of the so-called Armenian administration's flag at Muradov's meetings and events.

On another occasion, the Russian Defense Ministry in a news story published on its website used the phrase “Nagorno-Karabakh Republic,” referring to the separatist Armenian forces’ administration. After Azerbaijan objected, the ministry removed that part from the article.

Most recently, Azerbaijan's Foreign Ministry said Tuesday that the Armenian foreign minister's visit to the Nagorno-Karabakh region violated the conditions of November's trilateral agreement that put an end to the conflict between the two countries.

"The illegal visit of Armenian Foreign Minister Ara Ayvazyan to the Karabakh region of Azerbaijan, where he met with representatives of the puppet regime and signed the 'documents,' contradicts the trilateral statement of Nov. 10 and does not comply at all with the framework of peace, security and cooperation in the region after the cessation of hostilities," Leyla Abdullayeva, head of the Press Service Department of Azerbaijan's Ministry of Foreign Affairs, said in a statement.

Abdullayeva added that the violation of the commitments by an Armenian official is a "provocation" and such actions catering to a domestic audience do not serve the normalization of the situation in the region.

Fresh clashes erupted between Armenia and Azerbaijan in late September, rekindling the Caucasus neighbors' decadeslong conflict over the Nagorno-Karabakh region of Azerbaijan. During the conflict, Azerbaijan liberated several towns and nearly 300 settlements and villages from the Armenian occupation. Fierce fighting persisted for six weeks before Armenia and Azerbaijan signed a Moscow-brokered peace deal.

The agreement came after Baku's military overwhelmed the separatist forces and threatened to advance on Karabakh's main city of Stepanakert (Khankendi). Following the deal, Russia deployed its troops to the region for monitoring the implementation of the deal.