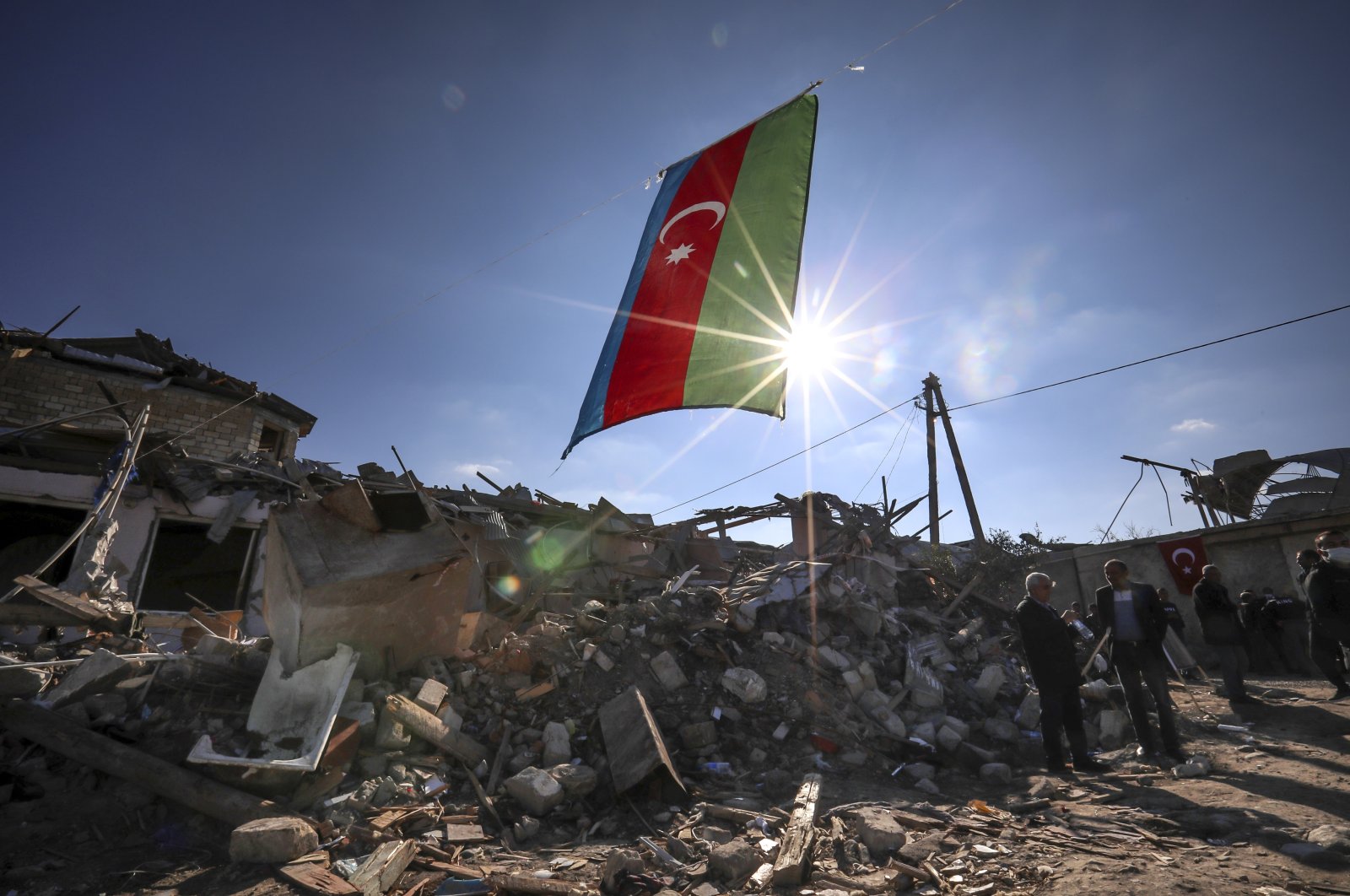 Azerbaijan's national flag flies over destroyed houses in a residential area that was hit by rocket fire overnight by Armenian forces in Ganja, Azerbaijan, Oct. 22, 2020. (AP Photo)
by DAILY SABAH WITH AGENCIES
Oct 23, 2020 11:50 am

It's been almost a month since the conflict between Azerbaijan and Armenia erupted once again over the occupied Nagorno-Karabakh territory. Despite multiple cease-fire attempts, the clashes continue to mount. Over the past 24 hours, the Azerbaijani army has been targeting Armenian drones, shooting down five of them.

The Azerbaijani Defense Ministry announced on Friday that three Armenian unmanned aerial vehicles (UAVs) that were attempting illegal flights over its sovereign territory were shot down, while three others were captured using special methods.

While the fighting is intense on the ground, in the air, the two countries' drones seem to be waging their own war with constant attacks on each other.

The importance of drones was signaled back in the months of July and August, before the eruption of the new clashes, as Baku downed multiple Armenian units that were conducting reconnaissance, especially over Azerbaijani positions near the Tovuz district.

Azerbaijan is mass-producing a new type of "kamikaze drone" the country announced on Thursday, adding that the machines are ready to use and are being delivered to the army. The drones are called "Iti Qovan," meaning "Dog Repeller."

In general, Baku sources the majority of its defense equipment, including the kamikaze drones, also known as "Harop," from Israel.

Other drones that are used by the Azerbaijani army include Turkey's Bayraktar TB2 armed UAVs.

The drones are referred to by many pundits as real game-changers for Baku, remarkably strengthening the country's power against Yerevan.

The two ex-Soviet republics have been locked for decades in a conflict over Armenia’s illegal occupation of Azerbaijan's Nagorno-Karabakh region. The territory was seized by ethnic Armenian separatists in a 1990s war that claimed 30,000 lives, though the recent fighting broke out on a northern section of their shared border far from Nagorno-Karabakh.

In another statement by the Azerbaijani defense ministry on Friday, it reported that the clashes most often take place in Fuzuli, Aghdara, Jabrayil and Gubadli, where its troops have managed to take several strategic areas and high ground under control. It went on to note that the Armenian Army's military resources and infrastructure have been heavily damaged, with its troops suffering from a lack of weaponry and food.

Azerbaijan also claimed that soldiers who were brought from Armenia to fight are refusing to do so in Nagorno-Karabakh, with many trying to flee.

Still, plans for U.S. Secretary of State Mike Pompeo to meet the foreign ministers of Azerbaijan and Armenia raised hopes of a possible cease-fire once again.

Russian President Vladimir Putin estimated on Thursday that almost 5,000 people have been killed in the fighting between the two nations.

"There are many losses on both sides," he said of the flare-up in violence.

Putin said he is counting on the influence of the United States for a peaceful solution to the conflict. Foreign ministers from Armenia and Azerbaijan were due in Washington for talks on Friday.

"I very much hope that our U.S. partners will work in unison with us," Putin said at the Valdai Discussion Club in Moscow.

Meanwhile, Elysee Palace sources said that French President Emmanuel Macron spoke with the leaders of Azerbaijan and Armenia and called for an end to fighting over the occupied region.

France will send medical aid to the injured with further details to be announced in the coming days.

Macron held a previously unannounced meeting with Armenian President Armen Sarkissian in Paris and said that only a diplomatic solution to the crisis would be acceptable.

For the negotiations to resume, however, there must be a "calmer climate," he said, according to Elysee Palace sources.