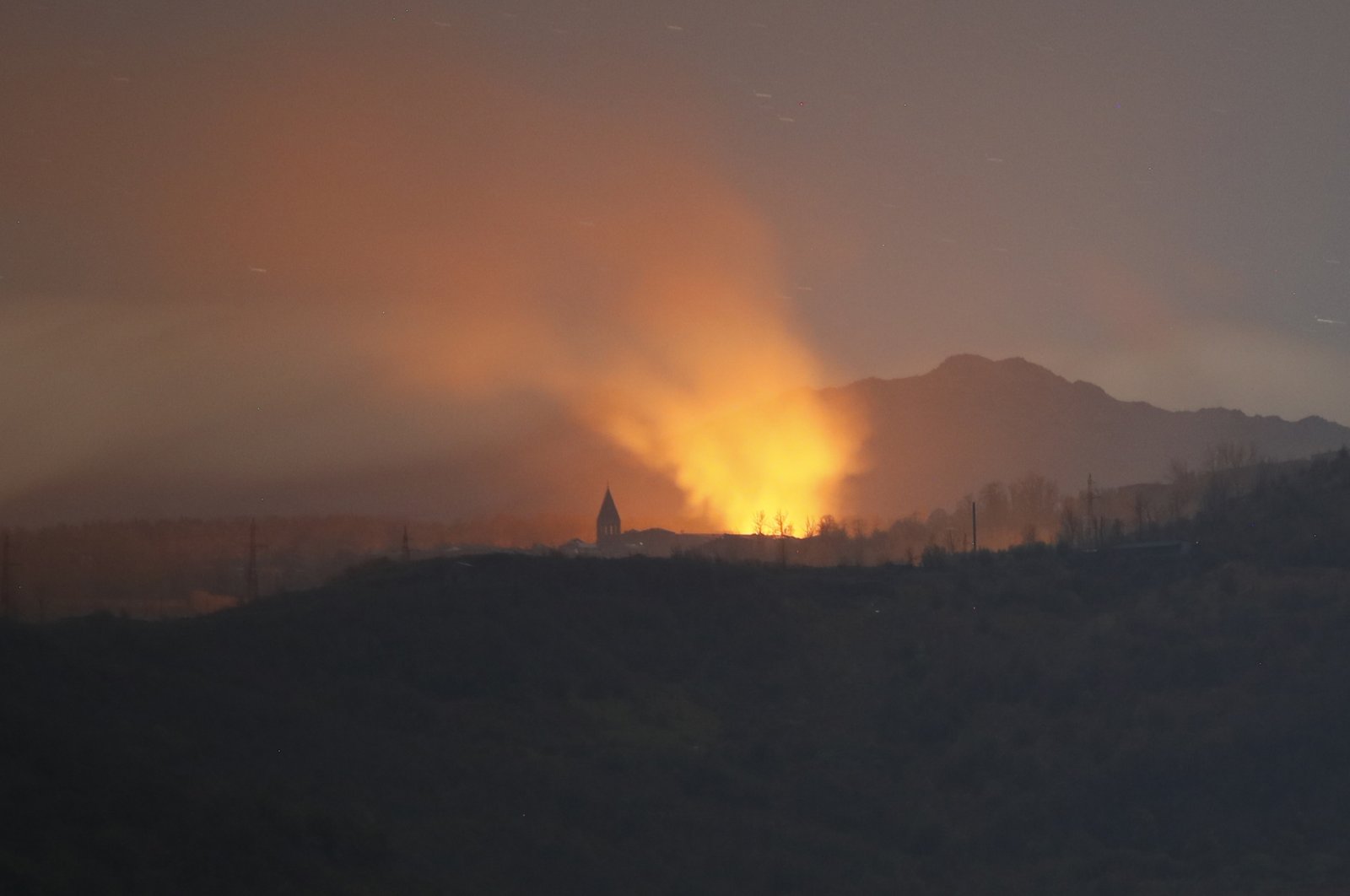 Bursts of explosions, smoke and flames are seen during fighting between Armenian and Azerbaijani forces near the Holy Savior Cathedral in Shusha, occupied Nagorno-Karabakh, Nov. 7, 2020. (AP)
by DAILY SABAH Nov 08, 2020 11:51 am
RECOMMENDED

The Azerbaijani army has liberated the key city of Shusha in the Nagorno-Karabakh region after 28 years of Armenian occupation, President Ilham Aliyev announced on Sunday.

"The adhan voice will be heard in Shusha after 28 years," Aliyev said in his announcement, referring to Muslims' call to prayer which is recited from minarets during daily prayer times.

"We proved to the world Nagorno-Karabakh is historical Azerbaijani lands," he said.

"Our victory march continues. If the Armenian leadership does not respond to my demands, we will go till the end," Aliyev said in his speech in the Alley of Martyrs in the capital Baku.

Gaining control of Shusha is a major victory for Azerbaijani forces, who have been making gains against Armenian separatist fighters since new fighting erupted over Nagorno-Karabakh a month ago.

The town has a significant military value since it is located on strategic heights about 10 kilometers (6 miles) south of the region’s capital over Khankendi (Stepanakert) and on the road linking the city with Armenian territory.

Last week, the leader of Armenian separatists in Nagorno-Karabakh said that Azerbaijani forces were closing in on the town of Shusha, and its capture would mark a turning point after a month of fighting.

In a video recorded outside the town's famed cathedral, separatist leader Arayik Harutyunyan warned that advancing "enemy" forces were 5 kilometers (3 miles) "at the most" from the town.

"The enemy's main goal is to capture Shushi ... whoever controls Shushi controls Artsakh," he said, using the Armenian names for the town and Nagorno-Karabakh.

He called on Armenians to come to the defense of the strategically important town, the second-largest in Karabakh after Stepanakert.

"In the next few days, we need to reverse this situation at the front and punish the enemy right at the gates of Shushi. Let's unite and fight together," he said.

Azerbaijan and Armenia have been locked in a bitter conflict over Karabakh since Armenian separatists backed by Yerevan seized control of the mountainous province in a 1990s war that left 30,000 people dead.

Karabakh's self-declared independence has not been recognized internationally, even by Armenia, and it remains a part of Azerbaijan under international law.

The heaviest fighting since a 1994 cease-fire erupted on Sept. 27 and has persisted despite intense diplomatic efforts to bring it to a halt.

The two sides have three times agreed to cease-fires – the latest in a U.S.-brokered deal on the weekend, but the truces have all quickly fallen apart.

The fighting has intensified in recent days with renewed shelling and rocket attacks on civilian areas.